In the realms of science fiction, dimensions parallel to our own have long been a staple of the broader notions of reality put forth by futuristic thinkers. Given that such a reality might exist, at any given moment there may be identical versions of ourselves operating in a dimension adjacent to our own; alternatively, perhaps there are worlds that are far more alien and different that exist in such parallel realities.

Parallel worlds aren't a concept that remains exclusive to science fiction, though. For decades, scientists have sought to explore whether our universe might actually be a "multiverse", borrowing a term first coined in the 1890s by philosopher William James to describe a number of adjacent realities which could exist apart from our own.

Scientist Ranga-Ram Chary is among those many scientists who have pursued evidence of worlds beyond our own. For years, he has been involved with studies that have sought to map the cosmic microwave background, consistent of radiative light energies which were produced very early on in our universe resulting from the Big Bang.

This "background" has long been an area where physicists have suspected evidence of parallel universes might eventually turn up, and now, Chary thinks he may have found such evidence, as indicated by a "mysterious glow" which could be evidence of matter from another universe leaking its way into our own.

Chary, a researcher at the European Space Agency's Planck Space Telescope data center at CalTech, said the glow could be due to matter from a neighboring universe "leaking" into ours, according to New Scientist magazine.

"Our universe may simply be a region within an eternally inflating super-region," scientist Chary wrote in a recent study in the Astrophysical Journal.

In Chary's paper, he notes that although there is a 30% probability that "noise fluctuations" might be the underlying cause of these observations, "it could also possibly be due to the collision of our Universe with an alternate Universe whose baryon to photon ratio is a factor of ∼65 larger than ours." 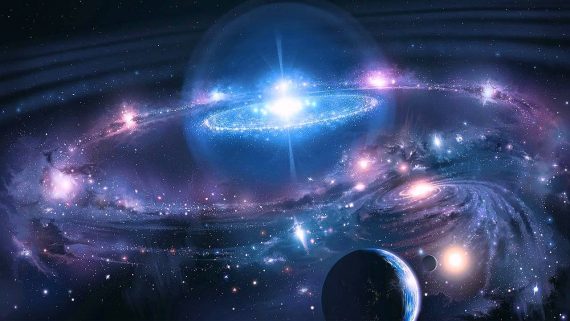 Theories of a multiverse are popular today among a number of physicists, which include Stephen Hawking, Michio Kaku, Brian Greene, and a host of others. However, despite the popularity of the theory, not all are as enthusiastic. One vocal opponent of the multiverse theory in recent years has been Steven Weinberg of the University of Texas at Austin, who noted in 2007 that for a multiverse to exist, "the hope of finding a rational explanation for the precise values of quark masses and other constants of the standard model that we observe in our big bang is doomed, for their values would be an accident of the particular part of the multiverse in which we live."

Though the debate continues, perhaps Chary has managed to find evidence of something unusual out there on the edges of our universe... but what, precisely, is it? Will this ultimately result in the likeliest evidence forthcoming of parallel universes to-date?

Along the way toward discovery of possible realms beyond our own, humanity will continue the search for scientific understanding of known properties of our own present reality just as well. Among these, our study of observable universal forces may eventually come to be understood in such a way that a unification into a single "superforce" might eventually become possible, a force which physicist Paul Davies has described as one allowing humans "to manipulate the dimensionality of space itself, creating bizarre artificial worlds with unimaginable properties. Truly, we [would then] be lords of the universe."

If such ability to manipulate space-time ever does become a reality, and not merely the stuff of science fiction, it will leave little to the imagination about worlds beyond our own, and the parallel realities that might await us there.

Adding Up the Negatives: Logic, Belief, and the Unexplained