Not Quite Nessie – Much Worse!

Back in 1982, a man named Cliff Twemlow wrote a horror-novel titled The Pike. It was a cryptozoologically-themed story of a giant, man-eating northern pike lurking deep in the waters of England's Lake Windermere. It's certainly not the greatest example of its genre, but it's an entertaining story filled with blood, guts, and characters who you just know aren't going to last too long. The back-cover blurb will give you an idea of what's in store:

"FIRST VICTIMS – A screeching swan...A fisherman overboard...A drunken woman in a dinghy...One by one, the mysterious killer in Lake Windermere claims its terrified victims. Tearing off limbs with its monstrous teeth, horribly mutilating bodies. Fear sweeps the peaceful holiday resort when experts identify the creature as a giant pike...A hellish creature with the strength to rupture boats – and the anger to attack them. But for some the terror becomes a bonanza – the traders who cater to the gathering crowds of ghouls on the shore. And they will do anything to stop the divers finding the killer. Meanwhile the ripples of bloodshed widen..."

Twemlow was quite a character (as this link demonstrates), and his novel almost became a movie starring Joan Collins. Unfortunately, it was not to be and the project was ultimately scrapped. All of which brings me to the theme of today's article. Not the giant pike in Twemlow's novel, but such creatures in the real world.

It's ironic that Twemlow chose Lake Windermere as the scene of all the deadly, bone-crunching action, as in the last few years sightings of an unknown large creature have been reported from the lake. It has become known as Bownessie. Paul Pearson, who has deeply studied the stories coming out of Lake Windermere, notes that in July 2006 the Devon, England-based Center for Fortean Zoology traveled to the lake to check out the stories for themselves - some of which dated back to the 1950s.

Pearson added that, "The CFZ (Center for Fortean Zoology) were responding to a report made by Steve Burnip, a holidaymaker from Hebden Bridge in Yorkshire who, on the 23rd July 2006, was standing on the rocky promontory known as Watbarrow Point near Wray Castle at the North end of the Western shore with his wife and some friends when they say they saw a wake, as if from a boat, and then realized it was caused by a 'twenty foot long animal swimming in the lake.'"

Since then, more reports have been made - with an excellent resource being Hayley Stevens' blog. To what extent Cliff Twemlow may have been inspired by early reports of the monster(s) is unknown. And, indeed, some of the stories suggest the creatures may be giant eels, rather than huge pike. But, make no mistake, whether they're in Lake Windermere or not, there's no shortage of reports of such large, dangerous creatures on the loose. 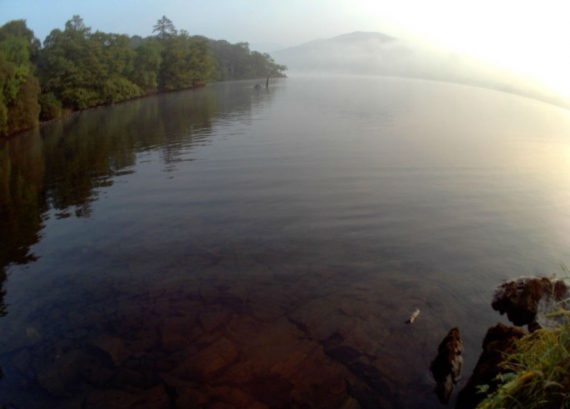 I was first exposed to the phenomenon back in the summer of 1984. A teenager at the time, I was working as a forklift-driver at a paint/wallpaper warehouse (a job I held for a few years). The story came from a man named Derek Yorrell, a lorry-driver for one of the paint companies we worked with. Derek told me a fascinating story of how, back in the 1960s, when he was a teenager, he and a group of friends were swimming in a stretch of canal not too far from the English city of Leicester. One of the group was viciously attacked by a large northern pike, which clamped its teeth on the waist of the terrified boy. The lads reportedly killed the ferocious fish, after which the unfortunate victim was treated for serious wounds at a nearby hospital.

Then there's a story which dates back to 1973, and that is related in issue 22 of the Center for Fortean Zoology's magazine, Animals & Men. That was the year in which a team of divers surveyed Norton Mere, a body of water located in Shropshire, England. While checking out the mere, the group was shocked by a brief, shadowy encounter with an enormous animal, one which churned the waters and created a huge wake. It was the conclusion of the group that what they had encountered was a northern pike of very large proportions.

And, finally, there's Teggie - the resident lake-monster of Bala Lake, Wales. For some the Teggie is (or the Teggies are) large sturgeon, catfish, or eels. For others, Teggie is just a creation of the area's tourist industry. And we also have the giant pike theory. Locals tell of sightings of massive pike, large enough to drag a grown man or woman to their death. In these cases we're talking about pike in the order of eleven or twelve feet in length - which is unprecedented. Impossible? Well, that's the big question. I have other, similar reports in my files, all of which suggest (but, admittedly, don't prove) that the tranquil waters of the UK might not be so tranquil, after all.

The Gruesome Mysteries of the Texas Killing Fields