Roswell’s UFO – The “Victims of the Wreck”

If, like me, you're fascinated by the seemingly-never-ending soap-opera known as "Roswell," you surely won't have missed the recent injection of life given to the so-called "Ramey Memo." It's a solitary piece of paper that some Roswell sleuths think is the Holy Grail of Ufology. If you're not aware of what's afoot, read on. UFO author/investigator Barry Greenwood says that the Ramey Memo is "...a folded piece of paper held in the hand of Brigadier General Roger Ramey, head of the 8th Army Air Force based at Fort Worth, Texas." He continues: "On July 8, 1947, photographs were taken of Ramey, his chief of staff, Thomas DuBose and Roswell AAF officer Jesse Marcel Sr...in response to an AAF press release that the debris recovered from the alleged Roswell UFO crash was a weather balloon..." Greenwood adds: "One can see in photo prints that the document being held has lines of text at the edge of visibility." Greenwood also notes that while the text "...remains at the extreme limit of resolution," it is a fact that a number of words "...do seem to be visible, asserting the document’s relevance to the Roswell incident, but little else is clear."

What's particularly interesting about this small number of visible words is that they appear to refer to what many researchers believe to be the "victims of the wreck." Now, I'm not going to get into the debate surrounding whether the words are being correctly interpreted or not, as that's an issue currently being hotly and deeply debated at both Rich Reynolds' and Kevin Randle's blogs. Instead, I'm going to focus on something else.

Let's say that, as technology progresses, we do get a clear (or clearer) image of what the memo says. And let's say that it does show the words "victims of the wreck." Well, what will that mean? Vindication for the extra-terrestrial hypothesis? Proof that some dark and domestic military experiment provoked the Roswell legend? Evidence that a foreign power launched a clandestine flight of something secret over the US and which went catastrophically wrong? Support for the "cryptoterrestrial" theory?

Nope. Not at all. The only thing that the document will convincingly prove is that what came down on the Foster Ranch, Lincoln County, New Mexico in the summer of 1947 was neither a weather-balloon nor a Mogul-balloon (the latter being the Air Force's best guesstimate as the culprit). We can state, with a fair degree of certainty, that the term "victims" would not be used to describe apes, monkeys, dogs, cats, rabbits, or other animals that may have been used in some early, secret, high-altitude-based, test. That word, "victims," is an interesting one, since it strongly implies "human" or something more than an animal. An alien? Maybe. Maybe not.

But, that's all it will tell us. A good case can be made that even if the words - "victims of the wreck" - are correct, the battle for the truth will have barely begun. Demonstrating that the object which crashed on the ranch contained "victims" - and was, therefore, not a balloon of the Mogul- or weather-based kind - would be a major breakthrough for the Roswell research community. But, to what extent would it provide us with anything else? Here's where things get difficult. 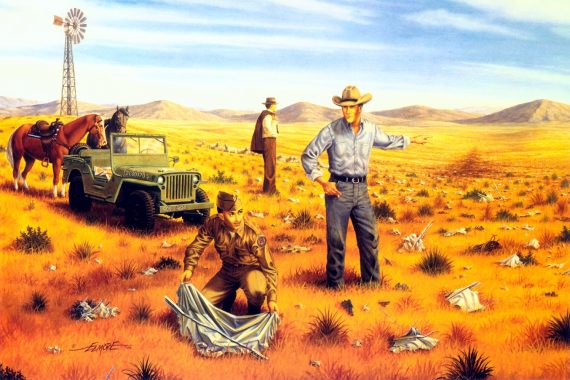 The Air Force has gone on record as stating that a detailed study of all available records has not uncovered a shred of data to conclusively show what happened at Roswell. It is the Air Force's theory, however, that the debris field was caused by a huge Mogul-balloon train. The General Accounting Office (now the Government Accountability Office) looked into Roswell at roughly the same time as the Air Force. Aside from being advised of the Air Force's Mogul theory, the GAO came up utterly empty-handed too. Numerous other agencies of the US government, the US military, and the US Intelligence community were also contacted by the GAO. The collective responses were, essentially, "we checked, we looked, we found nothing." Aside, that is, from a couple of scraps in the files of the FBI which proved nothing conclusive.

This leads me to suspect that whatever happened outside of Roswell in 1947 it (the materials, the bodies, the documentation, etc.) is not - today - under the jurisdiction of the Air Force, the CIA, or indeed any of the many and varied bodies that have been accused of hiding the truth. I suspect we're dealing with some sort of "Special Access Program" or "black-budget" operation, which is incredibly well hidden and perhaps answerable to almost no-one at all.

If that's the case, knocking on the door of the Pentagon, and asking about "victims of the wreck," will not work. Filing Freedom of Information requests will not work. Probing questions from Congress may not get anywhere. The people that so many expect to know the truth - the Air Force, the CIA, and so on - are not the keepers of the Roswell secret. Someone is, though. So, even if the Ramey Memo is shown to make a reference to the "victims of the wreck," the battle will not have been won. Finding files that not even the GAO or the Air Force could find will be a challenge of the likes that Ufology has never come up against before. If (and it's still wide open, of course) the "victims" controversy is vindicated, we are likely to see some interesting times ahead in Ufology.

On the other hand, however, if as has been suggested the words actually read "viewing of the wreck" (which gives a very different perspective!) it will be back to the drawing-board. And, of course, there's always the chance that the Ramey Memo won't become any clearer than it is right now. Time will tell where all this leads. Or, it won't. Either way, I will continue to eagerly watch my favorite soap.

In Search of the British Griffin, Pt. 2