Does PepsiCo know something we don’t know about the Black Knight satellite – that mysterious space object rumored to have been secretly orbiting Earth for 13,000 before its signals were heard by Nikola Tesla in 1899? There may be hints in this new six-minute video released by PepsiCo this week called “Black Knight Decoded.” What message from PepsiCo and the Black Knight are we suppose to see – other than Pepsi is the choice of the new alien generation?

The video/commercial is called “Black Knight Decoded” and is about a mission to decode signals from the Black Knight satellite, a fight against the government and a goal of uniting the world to hear the message. While it contains an anti-government angle, the video includes pictures from a camera on the International Space Station which probably required permission from NASA.

Does PepsiCo have its own secret UFO message or mission? This isn’t the first time PepsiCo has used UFOs in a commercial. In 1984 (1984!), Pepsi released this famous commercial where a boy watches a UFO hover over two soda machines before choosing a Pepsi.

In this 2014 Pepsi Max commercial, people see UFOs in a bus shelter.

In January, 2015, as a prelude to its Super Bowl XLIX halftime show in Arizona, Pepsi attended to recreate the famous Phoenix Lights UFO sighting with illuminated balloons and created a crop circle in the shape of its logo. 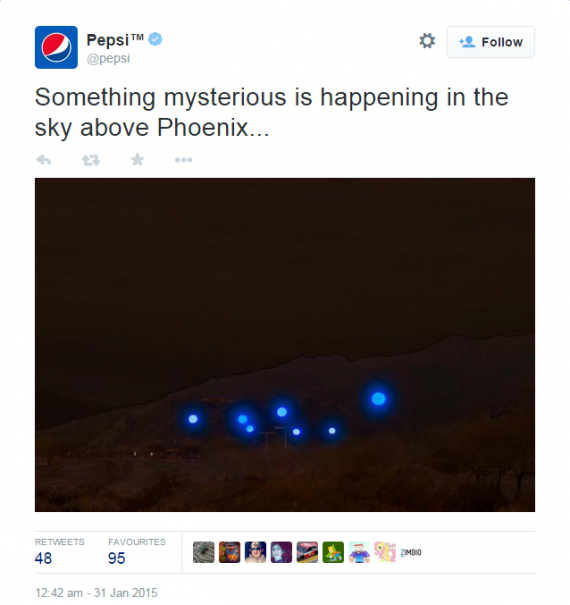 Then there’s the controversial burning hair commercial with Michael Jackson – known moonwalker and suspected alien. Is PepsiCo trying to make up to an alien species for harming one of its Earth residents?

Why has PepsiCo made such an effort to be associated with UFOs? Why is it releasing such an elaborate video about the Black Knight satellite now? Does it have real evidence of its existence (or of other UFOs or aliens) that it plans to reveal eventually? Is PepsiCo under the control of the Black Satellite? Should we be afraid? Should Coca-Cola?

Elongated Skulls Could Have Been a Survival Aid