The Lambton Worm, and the ‘Wicker Man’ Sequel That Almost Was

The terrific fear presented in Sergeant Howie's screams (portrayed by Edward Woodward) uttering the words above as he beholds the monstrous human effigy known as the "Wicker Man", has remained among the most iconic lines in British cinema. 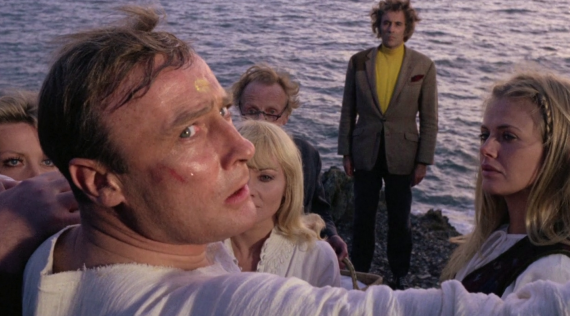 The Wicker Man, a British Lion Films production, was indeed the very stuff of cult classic cinema. It was cited by Christopher Lee as perhaps the finest among films he had starred in, in which he played the gregariously ominous Lord Summerisle, leader of a pagan cult on an island somewhere in the Hebrides. At the film's climax, the pure-hearted Sergeant Howie finds that his quest to save a missing girl, Rowan Morrison, was an elaborate trap set up by the religious sect on the island, set in motion to manipulate Howie to present himself before the cult of his own free will, and destined to become a human sacrifice.

As the film concludes, Howie is observed being burned within the massive wicker effigy, as the delighted cult members swing and sway to the sun setting over the ocean in a truly iconic ending sequence.

What is less well known about this ending is that, at one point, plans were underway to pick up where it left off, spinning an even stranger continuing story around the cult, Sergeant Howie, and the mysteries of the island. In fact, had this sequel ever been seen to fruition, it may likely have expanded the lore surrounding The Wicker Man into a fantastical legend, bearing more resemblance to The Lair of the White Worm than David Pinner's novel Ritual, the initial inspiration behind The Wicker Man.

More than fifteen years after The Wicker Man was released in theaters, writer Anthony Shaffer began work on what would become a thirty-page scrip for a direct sequel. Laden with heavy use of special effects, the story would open with a group of officers from the mainland arriving at the eleventh hour, just in time to rescue Neil Howie from being roasted within the belly of the wicker man. Upon his rescue, Howie sets about pursuing Lord Summerisle, who must be brought to justice for his horrific actions. 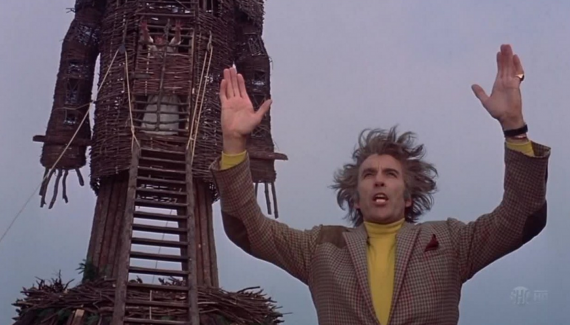 With so many years having passed since the first film had been made, Shaffer had written into the plot that as punishment for the failed sacrifice of Howie, all the cultists on the island appear to have aged prematurely. This would become one of the many new elements the sequel would have presented, drawing more heavily from witchcraft and sorcery, among other elements of fantasy which might have appeared more akin to Lord of the Rings than any precedent set by The Wicker Man.

In his book Inside the Wicker Man: How Not to Make a Cult Classic, chronicler Allan Brown described a number of the new elements the sequel would have presented:

"Where The Wicker Man drew from Celtic pastoralism and ancient Greek propitiatory myths dealing with death and rebirth in the cycle of nature, The Wicker Man II is spiced with references to more esoteric European folklore, such as Polevics, which are Russian corn spirits; the Rusalka, an erotic spirit which dwelt in trees; and the Leshy, another Russian forest spirit. There are also plates depicting the legend of Faustus, who sold his soul to devil, and the Lambton Worm, a malevolent snake/serpent which would coil round and squeezed the life from its victims. A pre-Christian precursor of the Saint George and the dragon myth, The Wonderful Legend of the Lambton Worm, was among the working title Schaeffer considered using for his sequel. Elsewhere many of the elements familiar from the first film reappeared: small baffling customs, taunting set-pieces, communal ceremonies, request for peace of hidden knowledge and, of course, spectacular and defining finale: ‘obviously it is a challenge to top the first film for an ending but I think we've done it,’ said Shaffer."

This ending, of course, would have seen Sergeant Howie engaged in a Saint George-style battle with the Lambton Worm itself, to be followed by a clash between spiritual world views: Howie's faith in the Christian God set against the old gods of Summerisle's pagan belief. Taken from Shaffer's script treatment, the dialogue between Howie and Summerisle describes the ultimate test of faith:

'Your a thirst for martyrdom will kill you,’ Summerisle tells Howie. ‘This is what makes it such a fair and fascinating test. You won't be able stop yourself from killing yourself - from offering yourself as a sacrifice to your god as I told you earlier, it's really why you came back.’

Here, Summerisle proposes a test, one which has held something of a tradition on the island. Howie will hurl himself from the cliffs above the sea where the last film's climax occurred, with a sea eagle tethered to each of his wrists, assisted in carrying Howie back to safe ground by his faith alone. Shaffer's treatment described the scene thusly:

’At first he falls slowly, sustained by the wildly flapping birds, but then he starts to travel downwards with a gradually gathering pace before disappearing into clouds which obscure the sea. There is a long silence and which we wait in vain to know the outcome of the fall. The camera slowly tracks along the line of islanders to see them all restored once again to youth.’

Although this certainly might have been an interesting film, had it ever been made, the doubts expressed about the script at the time prevented the project from getting off the ground. Later, Wicker Man director Robin Hardy had expressed dislike with the explanation for why the islanders had aged, as well as the principle upset Howie's survival from the wicker man ordeal might have caused (especially since, as the first film concludes, the head of the monstrous wicker effigy can be seen collapsing as it is consumed by fire, presumably falling with the rest of the burning body that contained Howie. In essence, his survival due to being rescued at this point might have presented logistical problems with continuity). 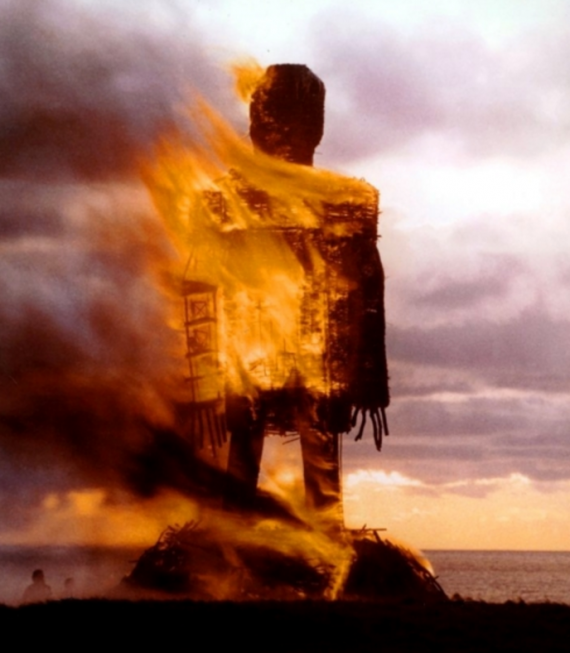 "I know [Shaffer] did write that," Hardy had been quoted saying of the script. "But I don't think anyone particularly liked it, or it would have been made."

Indeed, the surrealist elements presented in The Wicker Man might have been diminished had the continuation of the story drawn so heavily from the implausible; part of what made TWM such an unsettling story is the way that the supernatural elements, while implied, are strictly beholden to the belief among the islanders, whereas the literal battle with a dragon the sequel promised bore promise of throwing suspension of disbelief right out the window. Here again, the reader is asked to consider a film like Lair of the White Worm, and imagine it as a sequel to The Wicker Man, in which the clash of mythologies, while complimentary at times, becomes quite apparent on the whole.

Had Shaffer's script treatment actually been considered at the time, could there have been eventual revisions to the sequel's story elements, or even some kind of collaboration that might have helped bring certain elements back down to earth, and in a way that Wicker fans would have appreciated? Or, much like Sergeant Neil Howie in the first story's conclusion, would the entire thing have gone up in smoke? Whatever the case, it is fun to imagine what might have been, had the project been seen to fruition... or then again, perhaps not.

H.P. Lovecraft: His Triumph, Tragedy, and Teachings on Weird Fiction