Besides volcanoes, mines, deserted farm roads, Area 51 and the International Space Station, the best place to see UFOs these days seems to be through the window of an airborne passenger plane. Why are the numbers of these sightings increasing? Are UFOs becoming more interested in planes or are passengers becoming bored with peanuts and screaming babies and spending more time looking out the window?

This sighting took place in October 2014 but was only reported recently and is unusual for the number of UFOs spotted and recorded by the witness. The sighting occurred at 5 a.m., 30 minutes before the plane’s scheduled landing in Taiwan. The witness claims that he could have continued recording the UFOs but was told to shut down his iPhone in preparation for landing. Why didn’t he point them out to the flight attendant at that time? Good question.

This unusual UFO with orbs floating near it was reportedly recorded in November 2015 by a passenger on a flight over Rajasthan, India. It appears to change orientation before descending into the clouds.

This horseshoe-shaped UFO was recorded flying near a passenger plane over Busan, South Korea, in 2012. Horseshoe UFO sightings are also on the increase – could they be some secret military aircraft tracking passenger planes as practice for future war activity?

This UFO was seen by a flight attendant (although it appears she was a passenger on this flight) in September 2015 as the plane took off from St. Louis. Her husband, a commercial pilot, claims he’s never seen anything like this. 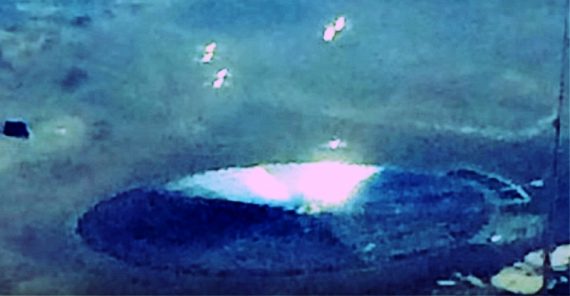 The most talked about recent sighting from a plane took place over the Nevada desert near Area 51. From the photos, it should be called an unidentified not-flying object (UNFO?) as it appears to be a large metallic disc on the ground. The photos were taken in October 2015 and the witness claimed he showed it to Air Force personnel who could not identify it. However, others speculate it’s actually a round solar panel from a solar power facility in the desert.

There are undoubtedly many more sightings from planes by passengers who don’t believe what they’re seeing or are afraid to reveal it for a variety of reasons. Without these reports, and especially photographs and videos, we may never know what’s following these planes.

Oh, and it wouldn’t hurt to point it out to a flight attendant or fellow passenger.