UFO Sightings Near the Sun Heat Up in November

Pun intended. The number of UFOs seen near the Sun continues to increase at a hot pace (OK, that’s the last one). Just in the month of November, there have been sightings of objects that resemble an angel, a cube, a large spacecraft and various other orbs and shapes. Is the Sun becoming an even bigger UFO hot spot (I lied) than it was before or are more people getting bored with Facebook and spending their time instead searching the SOHO LASCO images for UFOs?

The most interesting UFO of the month has many people scrambling for images to compare it to. The symmetrical shape appears to some as a conventional Earth satellite (albeit huge), to others as the Chevrolet logo (now that would be an impressive advertising gimmick) and still others as the Angel of the North – a sculpture by Sir Antony Gormley standing in Tyne and Wear, England. Whatever it is, it’s very well-defined as far as solar UFOs go.

Another interesting and symmetrical UFO found in early November is shaped like a cube with a star or cross on its side. Cube-shaped UFOs are common on Earth but unusual near the Sun. The cross or star has some looking at it as a religious symbol or apocalyptic omen.

This UFO spotted on November 9th looks more like a conventional spacecraft with rear wings and a long nose. 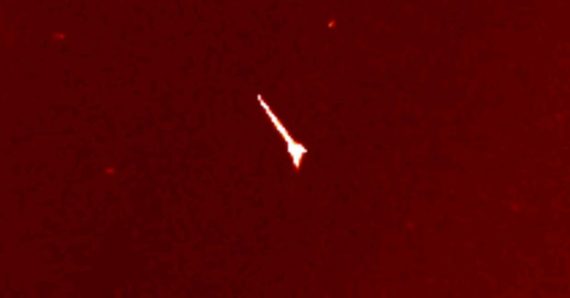 Most solar UFOs look more like something that resembles a blurred disc or saucer that you wish was just a little bit closer, like this one seen on November 20th. Maybe a mothership, maybe a fuel barge, maybe something else. 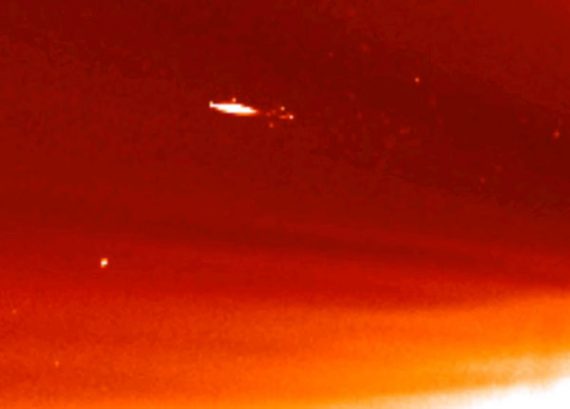 While astronaut Scott Kelly’s UFO tweet from the International Space Station got all of the publicity, a similar UFO was spotted near the Sun just days later by the NASA’s stereo/EUV-A-304 satellite. Could it have been the same object? 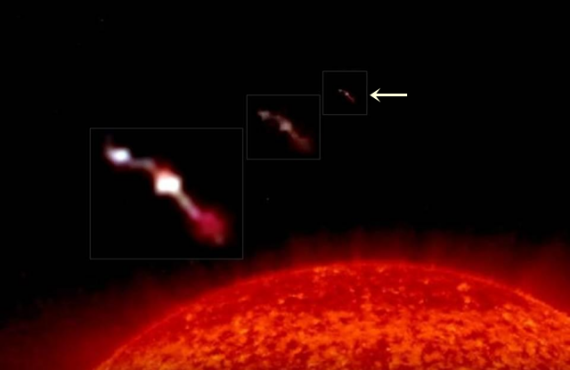 Why are so many UFOs being spotted near the Sun? Is it really just because there’s more eyes scrutinizing the photos? Are more spaceships lining up to refuel because the price of solar power is about to go up universally? Am I getting (here it comes) warmer?