UFOs: Creatures in the Sky?

Make mention of UFOs and it will likely conjure up imagery of flying saucers and diminutive, black-eyed, large headed ETs, and alien abductions. At least some UFOs, however, may have absolutely nothing whatsoever to do with visitors from far away solar-systems and galaxies. Welcome to the world of Trevor James Constable, who was born in 1925. Having investigated the UFO phenomenon extensively, Constable penned several books on the subject, including They Live in the Sky (which was published in 1958) and Sky Creatures, which followed two decades later. In deeply studying the UFO phenomenon, Constable came to a fascinating conclusion concerning what he believed to be the truth of the mystery surrounding flying saucers.

Constable’s conclusion was that some UFOs are not nuts-and-bolts craft from distant worlds, but living creatures that inhabit the higherlevels of the Earth’s atmosphere. While many UFO investigators scoffed at Constable’s undeniably unique ideas, none could deny that his theory was well thought out. Constable believed the creatures to be unicellular and amoeba-like, but having metallic-like outer-shells, which gave them their flying saucer-style appearances. He also believed they varied in size from extremely small to lengths approaching half a mile – which, admittedly accords with what UFO witnesses tell us: the assumed alien craft that people have reported do indeed vary from a few feet to massive “mother-ships.”

If the skies of our planet are constantly populated by an untold number of airborne critters, then why don’t we see them for what they really are – and on a regular basis? It’s not a case they are here one minute and gone the next. For Constable, that was only how it appears. They’re always here, in massive numbers; we’re just not physically able to see them in their natural state. Constable also concluded that this theory explained why some UFO witnesses had photographed UFOs, but had not seen anything out of the ordinary when they took the picture. In other words, when it comes to Constable’s sky-critters, the camera may see what the human eye cannot.

Constable believed that even though the sky-beasts possessed formidable powers that allowed them to remain out of sight – for the most part – they could be seen and photographed if one specifically used an infrared cine-film and a suitable filter. Constable even put his theories into practice. He did so in the heart of California's Mojave Desert, specifically in Lucerne Valley. Constable did not shy away from publishing his photos, which continue to provoke a great deal of debate among the UFO faithful. It’s important to note, however, that Constable’s claims did not stand alone. 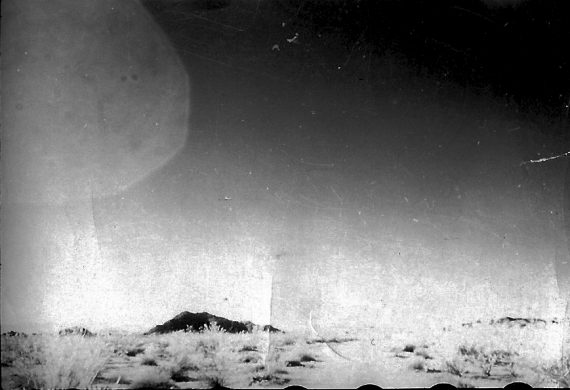 In May 1977, a UFO investigator named Richard Toronto – who had developed a fascination for Constable’s theories – decided to try and replicate Constable’s photos, also in the Mojave Desert. He claimed considerable success. As with Constable’s pictures – which some researchers felt showed nothing stranger than aircraft landing-lights, stars and planets – down to earth claims for the anomalies abounded. At least, they did among those UFO enthusiasts who didn’t want to see their cherished extraterrestrial theories questioned.

There is another theory for what both Trevor James Constable and Richard Toronto photographed. It’s a fascinating one, which was postulated by the late UFO- and paranormal-investigator, D. Scott Rogo. It was his opinion – or, perhaps, his “strong suspicion” would be better terminology – that both men had unknowingly created the sky-monsters from the depths of their imaginations. And their psychic abilities allowed them to project their mind-monsters externally, to the point where they had quasi-independent lives and could even be caught on camera. In that sense, we're talking about something akin to the issues surrounding "thought-forms" and Tulpas.

Whatever the truth of the matter, today, decades after he first began formulating his undeniably alternative theory for what UFOs might be, Trevor James Constable still retains a faithful following, who believe our skies are not filled with extraterrestrials, but with large, flying, amoeba-like creatures.

Security on High Alert After UFOs Seen Over Delhi Airport