In a creepy case of life imitating art, a man in Indiana pleaded guilty to breaking into a former mental hospital to steal jars containing human brains that he then sold on the Internet. Is he a modern-day Igor? What were these wannabe Dr. Frankensteins who bought them going to use the brains for? 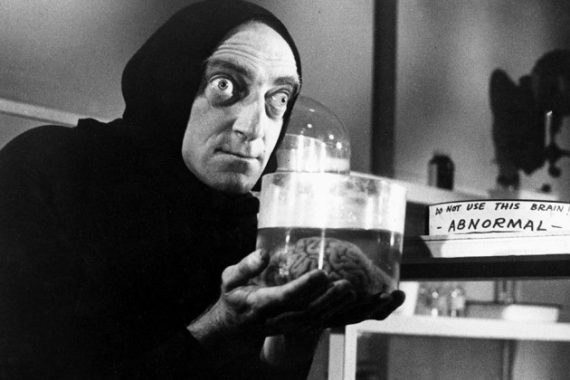 It all started in 2013 when then 21-year-old David Charles began stealing jars of human brains and preserved human tissue from the Indiana Medical History Museum. The museum was formerly the Central Indiana Hospital for the Insane where patients with psychiatric and mental disorders were treated from 1848 to 1994. The brains were removed during autopsies on patients.

What did Charles do with the brains? He sold them on his Facebook page. In a post on October 14, 2013, he said:

yo I got a bunch of human brains in jars for sale hmu for details u know u want one for Halloween.

How many brains did he have in stock? Investigators recovered 80 jars, including 60 stolen for his best customer – a man who had previously purchased 6 jars from Charles for $600. That planned big sale turned out to be a big bust. The man noticed his brains were stolen and notified the police, who set up a sting to capture Charles. He pleaded guilty this week to six charges including burglary and receiving stolen property and was sentenced to one year of home detention and two years of probation.

What about the guy who bought the brains on eBay and anyone else who shopped at Charles’ brain boutique? The buyer who set him up nor any other customers are identified in any of the reports.

Could the brain buyers have been wannabe Frankesteins? It’s entirely possible since Mary Shelley’s “Frankenstein; or, The Modern Prometheus” may have been inspired by real people: Giovanni Aldini, who attempted to reanimate deceased humans or Johann Konrad Dippel, who attempted to use chemistry to prolong life. However, the original novel had no brain-stealing assistant named Igor.

Perhaps the buyers are trying to beat Dr. Sergio Canavero in his attempt (scheduled for 2017) to perform the first human head transplant.

In any case, the brain thief of Indiana has been captured. You can stop wearing your burglar alarm hat.

Donut UFOs Seen at Space Station and Over Thailand