In their efforts to seek out the truth of Bigfoot, investigators have secured a wealth of material that, while it does not absolutely prove the existence of the creatures, most assuredly goes a long way towards doing exactly that. Footprints, film-footage, photographs, and witness testimony have all added greatly to what we know about these elusive beasts. And then there is the matter of the voice of Bigfoot.

A number of recordings have been made of what are purported to be the vocalizations of Bigfoot. While some have been explained away as known animals, there is one set of recordings that, more than any other, really catches the attention of people. They have become known as the Sierra Sounds. The story of the Sierra Sounds dates back to the 1970s, and is focused around two Bigfoot investigators, Ron Morehead and Al Berry. On a number of occasions, the two men captured astonishing audio recordings of what many believe to have been Bigfoot creatures – in the Sierra Nevada Mountains of California.

There is, however, another angle to the controversy surrounding the voice of Bigfoot. It's an angle that pushes things down a very weird and controversial path. We're talking about Bigfoot being telepathic. There's absolutely no doubt that many researchers of Bigfoot ignore the "high-strangeness" aspect of the mystery. By that, I mean things like (a) reports of Bigfoot-type creatures seen in the same time-frame and locations as UFOs; (b) accounts of Bigfoot vanishing in a flash of light; and (c) the "inter-dimensional" theory to explain the origins of the Bigfoot creatures.

I, however, don't ignore such cases, and for one very good reason. I always tell people - if and when the subject comes up - that the most important people in the field of Bigfoot are not the researchers, the investigators, the authors, or the radio-show hosts. The most important people are the witnesses. After all, they are the ones who have seen the beasts, and they are the ones sharing their stories with us. So, we should listen to them, no matter how strange their accounts might be. Doing nothing but relegating "rogue" reports to the filing-cabinet - with barely a second-look - demonstrates an unfortunate bias on the part of the investigator.

Over the years I have come across quite a few reports of people claiming to have heard Bigfoot in the woods. Typically, we're talking about reports revolving around growling, grunting, howling, and screaming. On more than a dozen occasions, however, I have been on the receiving end of reports from people who claim to have received what can only be described as telepathic messages from Bigfoot. And in English, no less! Yep, I can see eyes-rolling and heads-shaking as I write these words!

Of course, it's controversial enough to say you've seen a Bigfoot. It's even more so to claim it spoke to you on a mind-to-mind basis. But, when such reports exist, there's a duty to study them. I can honestly say that of the probably fourteen or fifteen people who I've interviewed in relation to this issue, I would only class two as being suspect. One was clearly nuttier than squirrel shit, and the other was more than a bit odd.

But, as for the rest of the reports...well, they came from people who exhibited no odd traits, and who just wanted to share their accounts in an effort to try and figure out what it was that happened to them. Of all the cases I have on file, the one that is always foremost in my mind is that of a husband and wife named Donnie and Lynne. I interviewed them back in late March 2007. In the early part of that same month - as Donnie and Lynne told me - the pair encountered a huge Bigfoot in the expansive depths of the Ouachita National Forest, which covers parts of Arkansas and Oklahoma. 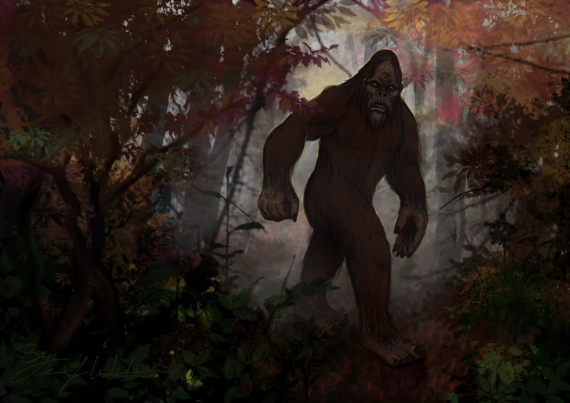 It was while walking along a trail that the two were suddenly plunged into states of terror when a hair-covered creature, in excess of eight-feet in height, and with a cone-shaped head, crashed through the woods and appeared around twenty-feet from them. Lynne told me how she dropped to her knees in fear, while Donnie - demonstrating a really open account of what happened - uncontrollably urinated in his pants. With hindsight, they felt the beast was caught by surprise. Although, it clearly didn't exhibit any of the fear that Donnie and Lynne did. Now, is where it gets controversial.

Both of them heard the following words in their minds: "Do not be afraid. You will not be harmed. Do not come closer." Well, I say they heard the words. But, it's almost as if they interpreted them. On this specific matter, Donnie said to me that it was as if "...we were thinking the words, but listening to them too, if that makes any sense." The creature moved closer to them, again offering a few choice words of warning, before vanishing into the woods. Weirdest of all, the voice sounded like that of a human woman, soft and clear.

I don't think Donnie and Lynne were spinning a tall-tale, and I can't see any reason why they would even want to. Admittedly, I have no way to explain such bizarre reports, beyond saying that while my files certainly aren't massive on this odd aspect of the Bigfoot controversy, I do have a handful or two of very similar ones. The Bigfoot phenomenon, there's no doubt in my mind, is a real one. But, the more I receive so-called "rogue" cases, the less and less I view these things as just unknown, North American apes.

Cube Satellite to Hunt for UFOs and Take Clear Pictures