We’re not shocked at the news about a mass animal cloning factory opening in China that is rumored to be conducting experiments on humans, so why is there such skepticism that aliens may be doing conducting genetic experiments with body parts taken from Earth animals during so-called ‘cattle mutilations’? Analysis of the remains of cattle after a recent mutilation in Argentina suggests this may be what happened there.

The cattle mutilation occurred in Villa Cool, a town in east-central Argentina. The bodies of three cows and a bull were found with body parts expertly removed with no evidence of blood. That’s not unusual since most reports on cattle mutilations use words like “surgical precision” and “laser-like” to describe the incisions. What caught the eyes of investigators in this case were what body parts were removed - tongues, jaws, brains, eyes and reproductive organs.

Why should we be concerned about these particular body parts being missing? Germs and bacteria, says Johanan Diaz who was investigating the mutilations for a documentary produced by Tercer Milenio. These are the body parts with the most germs and bacteria and that’s why they’re possibly being taken by aliens … to dissect, analyze and potentially modify the bacteria and genes. 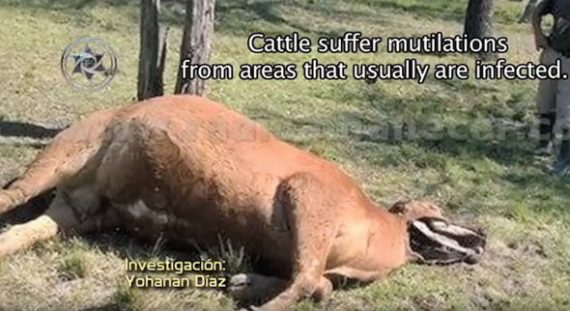 The genetically modified bacteria or germs could then be used by an alien invader to control or conquer humans by secretly manipulating the food supply. The bacteria could be changed to sicken or kill humans eating the cattle or, as may be the case in the factory in China and probably many other places, modify them to suit their needs.

Animal mutilations have long been a controversial topic. Suggested "natural" causes have included nature (animals or parasites eating the animals), decomposition (bloated skin splitting open like it was cut), religious cults, sick pranksters or secret experiments by governments or businesses.

If we humans are already conducting secret genetic experiments on animals and each other, why is it so hard to believe that aliens wouldn't do the same thing?

Flying Humanoid Over Indonesia May Be An Orang-Bati