For years now, there has been debate raging over the controversial introduction of genetically modified foods, commonly referred to as GMOs, for human consumption, which is primarily occurring in the United States. While the FDA rules that there is no discernible harm that results from human consumption of such products, many still worry that in the long term, perhaps there will be ill health effects that won't begin to surface until much further down the road; concerns that may have been overlooked in our haste to issue crops capable of yielding more produce, and more quickly than ever before.

Until now, FDA approved foods that have been modified genetically are relegated to plan species; mostly corn and soy, though some root vegetables such as beets and potatoes are included, as well as papaya, sprouts, and a few others, resulting in roughly 80% of all processed foods sold in the U.S. containing GMOs. However, the latest candidate for GMOs being introduced into our markets and restaurants won't be the kind that is planted and grown.

TIME reports this week that an engineered variety of salmon, called the GMO AquAdvantage salmon, are full-grown at 18 months, making them more than twice the size of a wild Atlantic salmon at the same age. The FDA has also just green-lighted them for consumption, which means they could be appearing in stores, and on menus, very soon.

Currently, the question over whether gene modification will harm these fish "isn't clear," which is sure to upset many animal rights activists (and yes, despite being genetically modified, the resulting fish are very much still animals, though not entirely natural). With questions over how genetic modification may potentially effect the salmon themselves, some are equally concerned over whether long-term health effects might not arise as a result of their consumption by humans. With this in mind, of equal concern is the fact that there are no regulations in the U.S. presently that require companies to label GMOs as such... which means that you would not necessarily know whether or not the salmon you order in a restaurant could be one of the genetically modified varieties.

The FDA, by saying the new GMO AquAdvantage salmon are safe for human consumption, are of course affirming that rigorous scientific testing has been done to support this. However, does this make it unjustified to worry that we may not be seeing the full picture here, which arguably, only time will show (especially since this is the first instance where a non-plant source of GMO food is close to being introduced)?

There is also the pressing question of what might happen if any of the genetically modified varieties of salmon (or other similar GMO species yet to be accounted for) were ever introduced into the wild, whether by intent, or by pure accident; what changes might take place among wild salmon populations as a result? 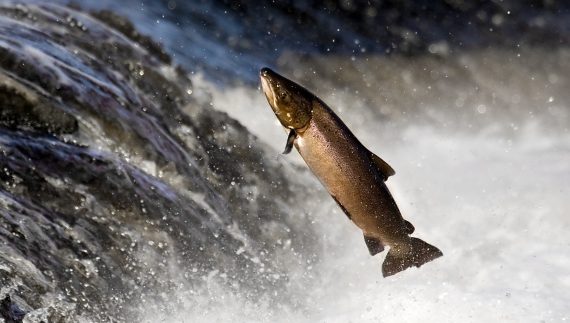 According to the Library of Congress resource page titled, "Restrictions on Genetically Modified Organisms: United States," under Section III it is stated that the FDA, "also asserts jurisdiction over genetically engineered animals, pursuant to its authority to regulate “new animal drugs” (NADs) under the FFDCA. It is further stated that:

"A [New Animal Drug Application] for a [genetically engineered] animal must include information on the animal’s identification; chemistry; clinical purpose; labeling; components and composition; manufacturing methods, facilities, and controls; safety and effectiveness; environmental impact; and other information."

Noting here that "environmental impact" is specifically cited among the queries the FDA must pursue in relation to obtaining NADAs, one would gather that there are indeed certain regulations that would apply to the influence such GMO species might have if ever assimilated into the wild. However, even regulations and federal laws might not be capable of preventing the accidental release of a GE animal the likes of the AquAdvantage salmon in every instance.

To be fair, on the "pro-GMO" side of things, one must realize the necessity for overcoming scarcity in the coming years, especially with concerns over population growth, and the existing concerns over hunger worldwide. However, it is hard to overcome the sense that without a complete data set to counter the possible worries that arise in relation to the GMO issue, this could present more problems further down the road than we presently realize.