In our ever expanding civilization with its voracious push into the frontiers of the world, it is exciting to know that there are places hidden away in the far flung remote corners of this planet of ours which have remained untouched, untamed, and unexplored. Existing in solitude for millions of years, some locales seem to be able to resist our relentless push into the unknown, and exist very much as they always have and perhaps aways will. One such mysterious and little understood place sits within the sprawling wilderness of South America's highlands, a place that is at once achingly beautiful and elusively mysterious. Here is a world within a world that sits perched high up within the clouds, with a history of Native legends and exploration just as daring as any adventure story. Within the confines of this patch of wilderness scamper creatures we know nothing of, and mysteries we are no closer to understanding than we were when it materialized out of the fog nearly 30 years ago. Welcome to the lost world of Venezuela's mysterious mountaintop sinkholes.

Scattered about the jungles of the Guiana Highlands of South America are majestic table top, or flat topped, mountains that rise up from the rain forest anywhere from from 1,000–3,000 meters (3,300–9,800 ft) up into the clouds. These are the awe inspiring tepuis of South America, notable for their sheer rock cliffs that erupt forth from the surrounding green to tower over and dominate the landscape, as well as their unique, ancient ecosystems living high above the forest floor, evolving in total isolation from the jungle, and indeed the world, around them. In fact, the ecology of these towering mesas is so completely unique and isolated that the tepuis are often referred to as “islands above the rainforests,” as well as “the Galapagos of the mainland.” Many of these tepuis are obscured by a perpetual crown of clouds and fog, masking their surfaces from view and requiring radar photography from aircraft to get a any visual image of them. Most of the tepuis are so far removed from the world below them that they have their own climates and weather, existing in almost another place and time. There are more than 100 of these tepuis dotting the landscape of the southern parts of Venezuela and Guiana, as well as in the bordering regions of Brazil, and they have held a place in the legends and myths of the local Native peoples for thousands of years, with the very name tepui meaning “house of the gods” in the language of the indigenous Pemon people.

Although all of the tepuis are a magnificent sight to behold, some in particular strike truly imposing visages. One such tepui which exudes immense grandeur and legend is Sarisariñama tepui, located in Jaua-Sarisariñama National Park at the far south-west of Bolívar State, in Venezuela. At approximately 984-7,710 ft. (300–2,350 m) high, with a summit area of 546.88 km² and slope area of 482 km² , it is truly a behemoth, and as with other mountains of its type, this tepui too is steeped in legends. The Ye’kuana people of the region believed that Sarisariñama tepui was the home of a dark, wicked spirit which hunted humans for food, which it would then whisk away into murky, dank caves to feast upon their flesh, and indeed the name Sarisariñama comes from the sound of the evil demon chewing flesh and bone, which was said to be a sound like “sari sari.” Indeed, to this day the local tribes regard this tepui as a menacing place inhabited by evil spirits, regarding it with a mix of both reverence and potent fear.

In addition to its imposing presence and the sinister myths surrounding it, Sarisariñama tepui is also known as being a rare example of a tepui with a forested top, and the summit here is packed with thick trees of various species which tower up to 25 meters (82 feet) high. It is also known for a total of four enormous sinkholes, which are deep, generally circular depressions in the ground caused by some collapse of the surface layer. The largest of these is the sinkhole known as Sima Humboldt, with “sima” meaning “sinkhole,” which is remarkably large, being 352 meters wide at its top, 502 meters wide at its bottom, and 314 meters deep. Sharing this forest world of the clouds is the other rather large sinkhole of the tepui, called Sima Martel, which lies 700 meters away and has a depth of 248 meters. At the bottom of both of these cavernous holes are groves of forest that precariously exist bathed in shafts of light that pierce through the murk from above. Perhaps even more intriguing than the sheer physical granduer of the sinkholes themselves is the story of their discovery and subsequent exploration, which reads like something out of an Indiana Jones adventure.

It was in November of 1961 when jungle pilot Harry Gibson was flying over Sarisariñama tepui and just happened to look down to see the yawning pits of the sinkholes peeking through the clouds below, marking their first discovery, at least to the outside world. The finding of these ancient sinkholes perched atop the jungle cloaked tepui and carpeted with trees at their bottoms spurred the imagination, and there was all sorts of speculation as to what wonders they might hold within them, with some going so far as to speculate that there could be prehistoric beasts roaming about them in true Arthur Conan Doyle fashion. Although interest was strong among intrepid adventurers and explorers to go check the enigmatic sinkholes out, the formidable, perilous terrain of nearly impenetrable jungle, lack of any roads, and steep, sheer cliff faces leading up the tepui made any such effort a decidedly daunting task. It was not until 1974 that a proper, well equipped and funded expedition was mounted to make the trek to the flat topped mountain and its mysterious sinkholes. Led by David Nott and Charles Brewer-Carias, the team consisted of an array of specialists who were about to penetrate into a region which was until then totally unexplored, uncharted territory that may as well have been the surface of another planet.

The team was dropped off at the tepui by helicopter, after which they prepared to descend down into the unknown down there in the murky gloom of the sinkholes themselves. Expedition members lowered themselves down into the largest Sima Humboldt with ropes, but soon faced a harrowing dilemma. It became apparent that the bottom of the sinkhole was significantly wider than the top, which resulted in the ropes hanging free and leaving no way out. Understanding that they were in a dire predicament, other concerned team members lowered down supplies as well as chainsaws for the purpose of clearing enough of the forest choked bottom for the helicopter to come in and land. The trapped expedition members went about cutting down several large trees that were perhaps entirely new species, and in the process did an unknown amount of damage to the delicate, secluded ecosystem that had existed there in isolation for eons. It soon became clear that there was no way the helicopter was going to get down there, and finally they were able to escape their jungle prison with cable ladders that were dropped down to them. Although there was no sign of dinosaurs, there seemed to be a wondrous array of new plant and animal life about, which would have to wait for later teams to catalogue. Among all of the potential wonders of this place, one of the mysteries uncovered during this expedition was that of how the sinkhole was formed in the first place. It had been thought that an underground river had formed it, but no sign of any such river was found and this would remain a mystery until further studies could be done. 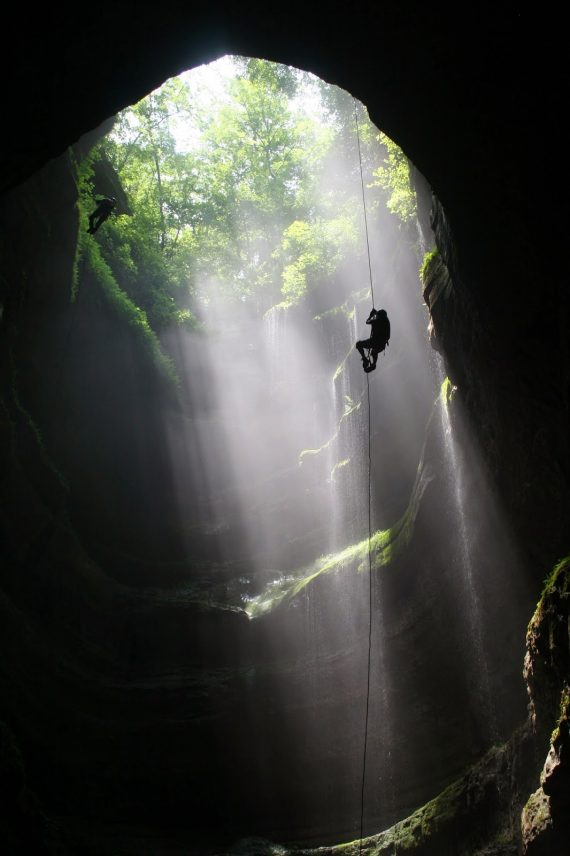 Another expedition to this remote locale followed in 1976, conducted in cooperation between the Polish and Venezuelan governments. This well equipped expedition would uncover another sinkhole, Sima de la Lluvia, which at 1.35 km long was long considered to be the longest known quartzite cave in the world. The discovery of this particular sinkhole also shed light on the mystery of how they had been formed in the absence of an underground water source, in this case an unusual origin of inexorable erosion caused by the weather. In later years, the two main sinkholes, Sima Humboldt and Sima Martel, would be named after the explorer Alexander von Humboldt and speleologist Édouard-Alfred Martel.

Even with these occasional expeditions over the years, Sarisariñama tepui and its magnificent sinkholes are even now largely unexplored and retain much of their mystique. Very few subsequent expeditions have attempted to gain more insight into the mysteries that lurk here, and the region is largely off limits to tourists in order to protect the incredibly unique ecosystem here, with only limited permits grudgingly given out to serious researchers to study the area. The potential discoveries to be made here are exciting indeed. The habitat of the forested tepui itself is home to a wide range of endemic flora and fauna found nowhere else on earth, totally cut off from the rest of the world by imposing, insurmountable vertical walls of rock, and there is thought to be a high concentration of new, never before seen species waiting to be found here. Lying within the two main sinkholes, just as evolutionarily isolated from each other and the rest of the tepui as the tepui is from the jungle far below the clouds, are the isolated forests at their bottoms, which are often called "islands within an island." Here too are thought to be an unknown number of new species of plant and animal life totally endemic to the sinkholes, with the species of each sinkhole distinctly unique and isolated; two different worlds despite lying only 700 meters away from each other.

No matter how much we explore this planet, no matter how much we strive to tame, understand, and control it, it seems there will always be wild places like this. Our planet shows an almost sentient will to hide them from us, to cultivate them, and to let them remain unchanged as they have been for millions of years. What secrets lie hidden from us at the bottom of these jungle holes held aloft in the sky? Will we ever understand their mysteries? Were we ever meant to? For now Sima Humboldt and Sima Martel remain a testament to our planet's tendency to sequester away some of its natural grandeur from our gaze, and I for one like the idea that there are still wild places in this world which we may never truly tame. Perhaps that is the way it was meant to be. Perhaps that is the way it should be.