Too Late for Christmas But At Least This Hoverboard Hovers

The biggest and possibly most dangerous dud this holiday season wasn’t Grandma’s flaming rumcake (a real dessert and a great name for a band) but the misnamed "hoverboards" that didn’t hover but instead rolled until they caught fire and stopped. While it was too late for Christmas gift giving (not to mention a little too expensive and a little too big to fit under the standard plastic Christmas tree), a company this week demonstrated an actual working (that means hovering) hoverboard. So should you put down the fire extinguisher and start making your list for next Christmas?

The hoverboard is called the ArcaBoard and it's the brainchild of the Marty McFly wannabes at ARCA Space Corporation, a New Mexico aerospace company better known for making stratospheric rockets and large scale stratospheric balloons and is currently developing a suborbital rocket plane and a stratospheric unmanned aerial vehicle.

Yeah, yeah, OK … what about the hoverboard? The ArcaBoard (it needs a better name) is a rectangular personal hovering vehicle that appears to measure about 4 feet by 5 feet. It’s lift comes from an array of 36 battery-powered fans that generate 430 pound of thrust to raise a rider almost a foot above the ground. The board also has some secret self-stabilizing technology that keeps the rider on the board.

Here’s the best news about the Arcaboard – unlike other previous hoverboards, it requires no special metal or magnet-filled track for riding but can be used over any solid terrain (it doesn’t look it’s a waterboard yet).

So why are we extinguishing flaming scooters and not riding this “revolutionary breakthrough transportation” hoverboard this Christmas? First, there’s the battery life. Generating 272 horsepower drains the battery in only 6 minutes and it requires 6 hours to recharge. An optional charger cuts that down to 35 minutes but costs $4,500. The rider steers the Arcaboard by shifting body weight – the optional stabilizer runs on a smartphone. Add all that to the $19,900 price tag for the basic Arcaboard and its no longer stocking-stuffer material.

The Arcaboard could use some better names too. The basic 3-minute-ride board is called the “Enhanced Thrust” model while the 6-minute-ride comes from the “Long Endurance” model – is this a hoverboard or sex toy?

When can you get an Arcaboard? It appears April 2016 is the target date for the first consumer-ready model. With its potential hover-ability, let’s hope it’s the real thing and not a cruel April Fool joke. 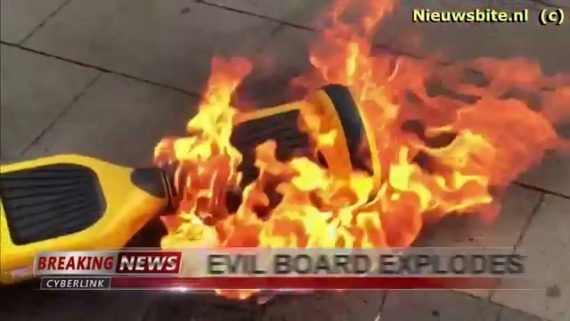 Number of Twins Born Sets Record and Doubles Since 1980