Hot on the heels of the discovery of a dome-like structure on the surface of Mars, a UFO was spotted by the Curiosity rover. Are the two events related? The number of UFOs on Mars seems to be increasing. Are the UFOs a sign that someone is getting nervous about human exploration on Mars? Or is someone trying to hide evidence of past human residence on the planet?

The latest UFO appears in a photo taken by Curiosity rover on December 4th, 2015. The image shows a disc-shaped UFO above the surface with the rover visible in the fish-eye view. Is this UFO in the same area as the dome? It’s hard to tell from the photo. Is its appearance related to the discovery of the dome?

That’s a question worth contemplating as it seems the number of UFOs being spotted above and on the surface of Mars is on the increase. This odd-shaped UFO was photographed in August 2015.

In March 2015, what appears to be a flying saucer that either landed or crashed in the Aram Chaos region of Mars was photographed by the Mars Observer orbiter.

That’s a lot of UFOs seen in just a span of a few months. Prior to this, they have been seen often but less frequently. A flying saucer-shaped UFO appears in a photograph taken by Curiosity in July 2014.

This UFO was photographed in January 2014 by Curiosity and appears to have some sort of exhaust or trail of emissions behind it. Is it making a quick getaway after being spotted?

Why do the UFO sightings on Mars appear to be on the increase? One theory is that they are from secret bases on Mars run by corporations and business is picking up. A series of interviews were conducted in 2014 with Randy Cramer, also known as Captain Kaye, who claims he spent 17 years living on Mars as part of the Mars Defense Force run by the Mars Colony Corporation which had established settlements and conducted mining operations there.

Wait, what? Where are the pictures of THAT?

Whatever they’re doing and wherever they are from, more and more UFOs on Mars are being photographed from both above and below. Is the news about water just a distraction from a bigger story? Is it under the dome? 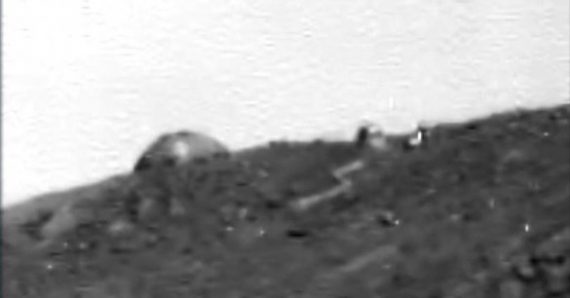