Was John Dee’s Fascination With the Occult Driven by Espionage?

Throughout the middle 1500s, renowned scientist and philosopher John Dee became what many would recognize as the first of the famous British spies. Whilst working as an educator in the fields of astronomy and mathematics (among other areas of expertise), Dee had famously been an advisor to Queen Elizabeth during his lifetime, occasionally working to secretly collect and transfer information to her as a personal liaison. Foreshadowing things to come, it had even been the insignia for Queen Elizabeth’s nickname for Dee—she referred to him as “eyes”—that likely inspired the later codename “007” that would appear in Ian Fleming’s James Bond novels.

Despite his scientific prowess and work as a statesman, John Dee has remained a controversial historical figure due to his occult leanings. Dee, after all, had aspired to study the fields of science in equal measure to that of magic and hermeticism, all during in an era in which the divide between the two was growing to be ever-more divided.

Because of his indistinguishable focus between such disparate fields of study, many scholars looking back on Dee’s life and work consider him a troubling--and perhaps also a troubled--figure. While obviously one of the great minds of his era, he had seemingly also appeared to be, at times, a rather credulous dupe.

Dee’s infamous partnership with occult seer Edward Kelley, for instance, would produce the “Enochian scripts” for which Dee is perhaps most famous; though at times, this came with great personal struggle and loss on Dee's part. Kelley, for instance, wishing to rid himself of such boring pursuits with the passing of time, would go to great extremes with hope of repelling Dee from any further interest in such collaborations. In one notable instance, Kelley even advised Dee that the “angels” they communicated with had advised that the two men must share their wives. Rather than rejecting the idea (and Kelley) as intended, Dee begrudgingly agreed to the arrangement, revealing his apparent utter trust for Kelley’s divining abilities, which, as history has since shown, were probably little more than the acts of an opportunistic charlatan.

The prolonged fascination that Dee maintained for such occult studies have remained a dark mark in the minds of many modern scholars, who cannot accept how such faith and fascination in the realms of “magic” might have complimented a learned man like Dee in any manner. And yet, there is perhaps another, less-often observed possibility pertaining to Dee, which some scholars suggest as an underlying reason for his devotion to magical studies. If true, it would suggest far less about his interest in the occult, instead having everything to do with his operations as a spy for the Queen during this period.

Around the same period Dee had been enthralled with his magical studies, Sir Francis Walsingham had served his tenure as Queen Elizabeth’s secretary of state. It has been speculated by some historians that Dee and Walsingham, with Dee’s role as spy and advisor to Elizabeth at the time, may indeed have been involved in British espionage work while he was visiting Prague (this is also where his angelic collaborations with Kelley had taken place). Given this set of circumstances, the angelic “revelations”, and their focus on the creation of a secret language, may be interpreted differently from having been an obsessive occult interest; the “Enochian” scripts may in fact have been representative of a coded language which Dee might use to communicate secretly with Walsingham, who remained in England at the same time. 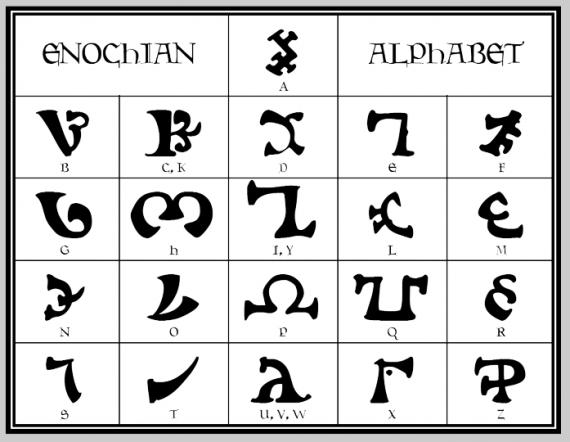 Further, the language itself, rather than having been “divinely” inspired by Kelley’s alleged observations through his shew stone of an angel Dee recognized as “Madimi”, could have had simpler origins: the earlier work of German cryptographer Johannes Trithemius may even have served as the inspiration for these scripts.

However, there are other possible implications that would have resulted from this odd tidbit in the annals of secret history. As suggested by occult scholar Peter Levenda, “the entire basis of the famous occult order known as the Golden Dawn may well have had its origins in espionage work.” It is well known, of course, that Dee’s works would go on to inspire the likes of MacGregor Mathers, as well as William Wynn Wescott, principle founder of the Golden Dawn that emerged, in part, from the earlier Masonic traditions that influenced these men. Later, Aliester Crowley would similarly borrow from the Enochian scripts of Dee (the latter, though, having expressed a certain disdain for Dee, ascribing the greater importance to the manipulator Kelley. We know, of course, that Kelley would go on to practice the magical arts well beyond his years with Dee, though none of this would end well for him. Kelley, after making the claim that he possessed knowledge on how to alchemically produce gold, would become essentially imprisoned by Emperor Rudolph II at Křivoklát Castle, near Prague. None of this, of course, might remove Kelley from having been complicit with Dee’s espionage operations, had he in fact been aware of them during their cooperative years.

It would indeed be interesting if Dee’s involvement in occult workings while in Prague might have had far less to do with the pseudoscientific “obsession” that many modern scholars attribute to him. In fact, due to his known activities as an Elizabethan spy, it may very well be the case that Dee was up to more than many may ever have realized.

The Strangest, and Most Significant, Weird Headlines of 2015