What Ever Happened to the “Flying Saucer” Shaped UFOs?

Beginning in early 1951, Edward J. Ruppelt, a young, witty, and overall promising US Air Force officer, began his service as chief of the USAF’s famous Project Blue Book. Housed within the Air Technical Intelligence Center, Ruppelt and a handful of staff would begin fielding the most credible reports of aerial phenomena which, at the time, were considered a legitimate potential threat to national security: these were, of course, the famous “flying saucers” that had been reported since the summer of 1947.

“UFO,” Ruppelt would later affirm, “is the official term that I created to replace the words 'flying saucers’.” The reason for this had been rather obvious: in the foreword written by Drunvalo Melchizedek, it was noted that there a handful of “types” of UFO that the USAF documented during the Blue Book years under Ruppelt’s oversight; these were the, Triangular craft, Cigars, Balls of Light, Balls of Flame, and of course, the famous “Flying Saucer". “The Air Force's conclusion,” Melchizedek notes, “after about four years of dramatic study was that this phenomenon was not the work of the Russians, not the United States — not anyone from this planet.”

Whether or not the non-terrestrial nature of the alleged craft can indeed be affirmed, it is clear that there had been far more occurring throughout the 1950s—and throughout the decades that would follow, just as well—than most conventional surveys of aviation history would indicate. In equal measure, it can hardly be argued that a number of the sorts of “saucers” and other UFOs that were being reported as humankind coasted along into the Atomic Age were, in fact, of terrestrial origin. Just within the last few years, the release of previously classified documents pertaining to aircraft test flights like the Oxcart program, the CIA’s codename for its project for development of the Lockheed A-12 reconnaissance aircraft, have shed new light on strange “saucers” seen at high altitudes above the American Southwest… saucers which, obvious though it seems to us today, bore more resemblance then to the advanced jet aircraft most of us are used to seeing today. 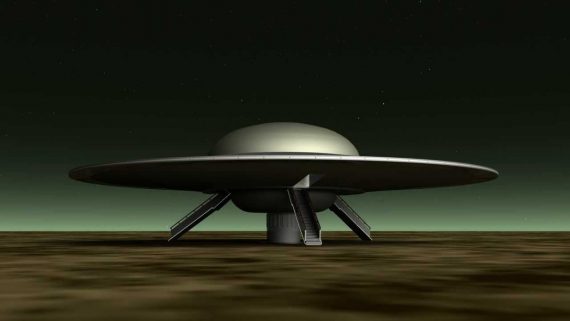 But that’s not to say that there haven’t been some legitimate reports of UFOs that aren’t so easily ID’d in retrospect, particularly those bearing the now-famous “saucer” shape. Consider the following account, once again sourced from Ruppelt’s own book on the subject:

“Just before noon on March 16, Chief Petty Officer Charles Lewis saw a disk shaped UFO come streaking across the sky and buzz a high flying B-36. Lewis first saw the UFO coming in from the north, lower than the B-36; then he saw it pull up to the big bomber as it got closer. It hovered under the B-36 for an instant, then it went speeding off and disappeared. When the press inquired about the incident, Captain M. A. Nation, commander of the air station, vouched for his chief and added that the base tower operators had seen and reported a UFO to him about ten days before.”

Similar non-air force reports have yielded fruit on occasion in the years that would follow. In my own personal research into UFOs over the last several years, a number of witnesses have described such seemingly-impossible aircraft to me; witnesses that I have come to know quite well in many instances, and whose judgement and credibility have earned my sincerest confidence.

One such report was related to me in the summer of 2013 by an individual named “Betty”. Having formerly worked as a statistician in various branches of the U.S. government throughout the 1980s and 90s, Betty confided to me that she had never been particularly interested in UFOs, and considered herself to be a “skeptic”. This, however, hadn’t caused her to dismiss her own observation of a classic, saucer-shaped aircraft in the early 1970s.

I must have been about 12, my brother Billy (11 months older) was there as well.  We lived in Venice, California at the time, about a mile from the beach.  Anyway, one night, Billy and I were outside playing around.  Suddenly we stopped at a loud engine sound and looked up to see the Goodyear Blimp flying low about a block away, heading west.  We were able to clearly see the advertisement on the side of the blimp.  Later, we stopped again to see the Goodyear Blimp slowly flying by to the east.  Every child in Los Angeles knows the Goodyear Blimp.

Billy and I had resumed our playing when suddenly I heard a vibrating sound coming from the right corner of the house.  I looked up and hovering close to the house was some sort of craft.  Because it was so close to the house I could only see about a 3rd of it's size (an estimation).  I saw the lights that appeared to go around the craft.  I remember red and white lights, too much time has gone by to remember for sure if there were other colors as well.  As I focused in on the rest of the exposed craft, I could see what appeared to be a "classic" flying saucer of the 1960s.  There were no apparent lights on the upper portion of the craft, it was grayed in its own lighting and from my house and street lamps.  I glanced at Billy who was staring with his mouth open. I looked back at the craft and saw it slightly tilt downward toward us.  I was so excited!   Just then my brother yelled "go get mom!"  I ran inside the living room and yelled at my mother "There's a UFO!" as she stared at me from the dining room with my oldest brother.  I pivoted there and ran back outside.  By the time I returned to my spot, my mom and older brother were already there.

"Where'd it go!"  I demanded from Billy.  Looking like he was shaken, he said that as soon as I turned to go into the house, the UFO shot out of there in a flash.  It was extremely fast and shot out toward the Venice Pier.  I looked out that way but could only see small orbs of light, much like airplanes from the airport (there are no stars in Los Angeles).

Billy and I were scoffed at and we were left to ponder over what we saw.

The next day my mother told me that in the paper, there were reports of an unusual light seen out over the Venice pier.”

Betty's encounter is like many that have crossed my desk over the years, supplied by clear-minded, sober individuals that, if anything, have maintained very little interest in the UFO subject. And yet, in such instances, the famed, if not archetypal "flying saucer" shape has remained, though perhaps not prevalently. 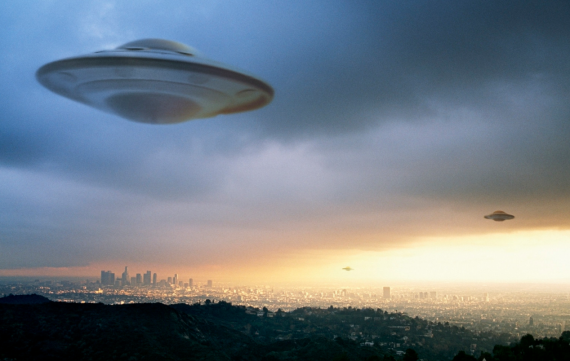 It is indeed funny, in retrospect, the way that so many things that once scared us become relegated to the lunatic fringe; like the drive-in horror movies from decades ago that scared the daylights out of us which, today, we laugh at, and point at the dangling bits of wiggling rubber that make up the monstrosities that once caused us to cower.

Maybe the UFOs are no different, in a sense: the only thing that could have actually been as scary as bug-eyed aliens in saucers from someplace else would have been the once-inevitable conclusion that the USAF had thought they might eventually determine: that the "saucers" had been something of our own making, and belonging to the boys across the pond, who were now waving the bigger stick. That ended up not being the case, of course... but if not Russian, then whose were they?

Even today, the odd disc shaped aircraft are still reported. They appear only sparingly--almost as if just to assert themselves from time to time--or maybe to be taken as some archaic reminder of the kind of weirdness that UFOs "used to be". Or at least, a reminder of how things were back in the good ol' days, when the flying saucer craze that swept the nation in the earliest years of the Cold War was still something new, refreshing, enticing, and yes, even scary.