Builders on Mars Will Be Able to Use Martian Concrete

While there’s no guarantee that Earth contractors on Mars will show up at the job site on time and finish the project when they said they would and under budget, at least they’ll never have to run back to their home planet to pick up more materials. A team of scientists on Earth has developed concrete using ingredients found in abundance in Martian soil.

According to a research paper by scientists at Northwestern University, the surprising secret ingredient for making usable Martian concrete is not the newly-discovered but very scarce Martian water – it's sulfur. The team, led by doctoral candidate Lin Wan, created simulated Martian soil by combining silicon dioxide, aluminum oxide, oxide, titanium dioxide and other materials. They found that the best particles for making the aggregate – the stone stuff in concrete - were 1 mm in diameter.

On Earth, the next step would be to add water and stir. That won’t work on Mars where water is scarce. Instead, the team used sulfur heated to 464 degrees Fahrenheit - the point at which it becomes a liquid. Mixed with the aggregate at a 50-50 ratio, the sulfuric slurry cools and hardens to form a concrete that is rated at 50 MPa - MPa (megapascal) is the metric unit used to measure concrete for pressure or stress. For comparison, builders on Earth use concrete rated at 20 MPa.

Another benefit to using sulfur is recycling. The sulfur concrete can be reheated, re-melted, reshaped and reused. Add to that the fact that it’s easy to handle, sets fast and uses materials that are plentiful on Mars and you’ve got the perfect building blocks for Martian offices, factories and apartments.

Wait a minute … what about those structures that have already been spotted in photographs taken by Mars rovers and satellites?

Do you think the first humans on Mars (that we know of) would want to be squatters? Besides, those buildings are probably overrun with Martian rats. 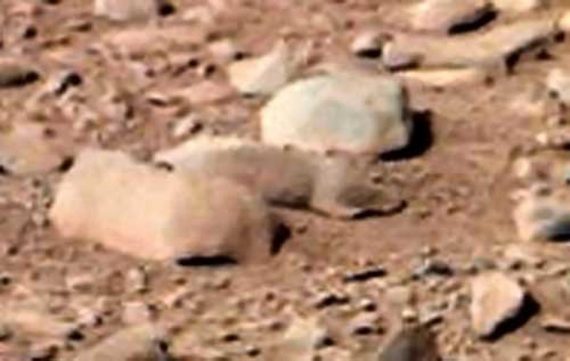