Conspiracy Theories: The Anatomy (and Etymology) of Misunderstanding

November 22, 1963 began as any other windy day in Dallas, Texas, apart from the scheduled visit of U.S. President John F. Kennedy that afternoon, who would make an appearance around lunchtime in the downtown area of Dealey Plaza. Kennedy's appearance at the motorcade that day would end tragically, as history shows us, marking one of the darkest moments in modern American history.

The results of what occurred that day would have much broader implications, however. While the idea of "conspiracy theories" is one that has been with us for quite some time, ideas about secret groups and cabals working in collusion with one another to carry out nefarious acts--much like that which resulted in the death of Kennedy that November day in Dallas--also began to change. Americans became ever-more wary of a "hidden truth" being withheld from them, and in turn, the American media began to employ the term "conspiracy theory" more virulently; a trend which has continued, if not worsened, leading right up to the present day.

The word conspiracy is, in itself, already a term that has resulted in some confusion about its use. The word seems to date back to the latter 1300s, in terms of its popular meaning, although the combined phrase "conspiracy theory" is believed to have first appeared as recently as 1909. The generally accepted definition of a conspiracy entails, "a secret plan by a group to do something unlawful or harmful," with the definition expanded by Merriam-Webster to include, "the act of secretly planning to do something that is harmful or illegal." However, the term has been defined in other ways, such as Dictionary.com's secondary definition, circa 2010, which carries somewhat less ominous undertones in describing, "To act or work together toward the same result or goal."

Echoing the latter, more esoteric definition of the term, prior to the 1300s conspiracy would literally have implied for two or more to "breathe together". This archaic usage of the term had been employed with some confusion by author Marilyn Ferguson with her 1980 treatise on New Age philosophy, The Aquarian Conspiracy (apparently the idea for using the term in this way was borrowed from Pierre Teilhard de Cardin, philosopher, futurist, and sometimes paleontologist who had at one time been suspected of involvement in the "Piltdown man" controversy of 1912). It takes little imagination to gather the kind of confusion Ferguson's book managed to arouse by employing "conspiracy" in its obsolete usage, let alone doing so as recently as the 1980s. 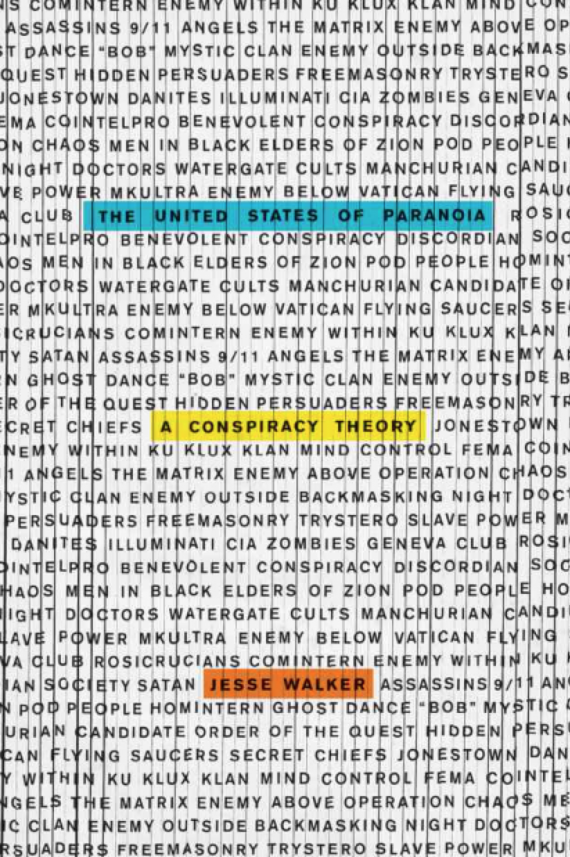 In his book The United States of Paranoia, Jesse Walker describes how, long before Kennedy's assassination, American culture had been rife with conspiracies:

"Pundits tend to write off political paranoia as a feature of the fringe, a disorder that occasionally flares up until the sober center can put out the flames. They’re wrong. The fear of conspiracies has been a potent force across the political spectrum, from the colonial era to the present, in the establishment as well as at the extremes. Conspiracy theories played major roles in conflicts from the Indian wars of the seventeenth century to the labor battles of the Gilded Age, from the Civil War to the Cold War, from the American Revolution to the War on Terror. They have flourished not just in times of great division but in eras of relative comity. They have been popular not just with dissenters and nonconformists but with individuals and institutions at the center of power. They are not simply a colorful historical byway. They are at the country’s core."

It had been around the time of Kennedy's assassination, however (and as Walker goes on to note) that the truly modern notion of a conspiracy theory began to truly take shape. Fundamentally, this began with the publication of Richard Hofstadter's The Paranoid Style in American Politics, in which American political conspiracism had brewed to a point capable of being recognized purely by "heated exaggeration, suspiciousness, and conspiratorial fantasy,” which Hofstadter noted could be found easily in both left and right-leaning publications of his day.

Returning again to Walker who, in writing of Hofstadter's examination, further notes the following:

"To be sure, there is more to Hofstadter’s paranoid style than a mere belief in a conspiracy theory. And there’s a risk of reading too much into those answers: You can believe the government has covered up information related to UFOs without believing it’s hiding alien bodies in New Mexico. (You might, for example, think that some UFO witnesses encountered weapons tests that the government would prefer not to acknowledge.) There is also a revised version of Hofstadter’s argument that you sometimes hear, one that accepts that conspiracies are more popular than the historian suggested but that still draws a line between the paranoia of the disreputable fringes and the sobriety of the educated establishment. It’s just that the “fringe,” in this telling, turns out to be larger than the word implies."

Just how much larger, though? In truth, it is this "fringe" association that appears to have dominated the conspiracy theory motif today. In the passage above, Walker notes that one "might, for example, think that some UFO witnesses encountered weapons tests that the government would prefer not to acknowledge." This example is a good one, primarily because of its proper understanding of the term "UFO". It is a term that has been hijacked in such a way (much like conspiracy has) that its modern usage is generally meant to convey belief in visitation by alien spacecraft... which is hardly what the meaning of the term had been intended for (and obviously, Walker understood this, as evidenced by his brief exposition quote above).

One might argue that the "conspiracy theory" which Hofstadter once thought could be wielded by "the sobriety of the educated establishment" is long gone in popular usage today; if mainstream usage today is any indication, "conspiracy theory" has been generalized to the point that it can be taken to mean any scenario espoused by an individual that deals with the following:

We could go on, but the point should be fairly clear by now. No, not all UFOs are "aliens"; yes, sometimes the U.S. government does withhold information from the public; yes, there are times where aspects of the valid science of climate change, like any scientific model, must undergo scrutiny; and yes, certain controversial historical discoveries may later prove to be factual, and based on good science, rather than idiot ramblings by some blogger on some "conspiracy theory" website (like the one you're reading, I'll point out... at least as far as Snopes.com is concerned. But hey, even I don't always agree with everything my fellow Mysterious Universe writers have to say. Consider me the resident skeptic, as it were... albeit a friendly one).

"Conspiracy theory", at its simplest, purely means that one speculates or theorizes that a conspiracy may be underway. When proposed under reasonable circumstances, this doesn't have to fall immediately to the fringe, but in fact could very much entail Hofstadter's conspiracy theory of the educated establishment.

The divide between the proper use of the term, and its modern editorial bastardization, became most apparent around the time of the 50th anniversary of the Kennedy Assassination. Admittedly, I found that I disagreed with little in the estimation of those who argued against the conspiracies involving a second gunman, and other popular conspiracies about what happened at Dealey Plaza that day. However, in the general commentary that was being offered by skeptical historians few (if any) were addressing the more obscure elements about the incident which, in the opinion of this author, certainly do beg further questions.

As I've outlined in the past, former KGB spy Yuri Nosenko, who defected to the United States after the assassination, failed more than one polygraph test involving questions over whether or not Lee Harvey Oswald had had further involvement with Russian KGB than U.S. officials had known (it was known, however, that Oswald had attempted to apply for recruitment with the organization while visiting Russia some years prior to Kennedy's assassination). Despite the alarming situation involving Nosenko, no mention of his interrogations had been included with the Warren Commission's eventual report on the assassination.

This is only one of several elements that are based in fact, but which nonetheless are omitted from most general discussion of the Kennedy assassination. In truth, if constant regurgitation of the notion that "Oswald may not have acted alone that day" is the only conspiratorial element one chooses to address in relation to the Kennedy assassination, we're really doing it no justice. Oswald's direct involvement is already taken as a matter of historical fact, with reliable evidence present that is accepted by the FBI's crime lab, as well as independent ballistic specialists who say (and have said) that everything, right down to what we see in the famous Zapruder Film, meets the expectations of real occurrences, explained in accordance with the narrative that describes Oswald as the gunman. 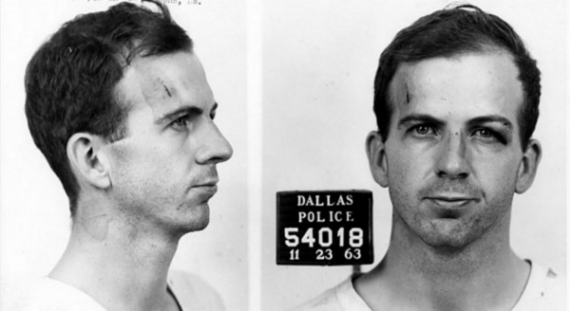 Still, even if he acted alone that day, could outside forces have nonetheless been present at some point, influencing his later actions? If so, could it also be the case that certain evidence suggestive of this was omitted from the official inquiry into the cause of Kennedy's assassination? If such ideas are to be entertained, one might further question why they aren't more often entertained by academic historians, rather than the popular rubbish which most ascribe to a "cover up". These, indeed, may be the facts about the case which Hofstadter would have offered to "the sobriety of the educated establishment." (For more on this, including U.S. Secretary of State John Kerry's opinions on the matter, see my past articles here and here).

To conclude, language, we must remember, is a funny thing; especially when one begins to realize that concepts do exist behind the superficial words we use in our attempt to express the reality around us. Language becomes even funnier once we observe the way words, and their meaning, can seemingly change, arbitrarily over time, leading to a further breakdown in the proper way of conveying knowledge and ideas. Much like term "UFO" before it, today we seem to have a cultural meaning attributed to the term "conspiracy theory" that irrevocably means fringe, if not simply idiotic... and in its mainstream usage, those who employ it this way are happy to keep it like that.

The Art of Deception: UFO Cults and Their Influence in America