It's a tried and tested scenario that has been used (to the point of complete and utter tediousness) in numerous monster-themed movies. We know that scenario all too well: a bunch of twenty-somethings head out into the heart of dense and isolated woods. And, in doing so, they fall victim to a marauding beast that takes out the group, one by one, and in inevitable violent fashion. Generally, the group is comprised of a couple of well-stacked hot-babes, a guy (or two) of the "heroic" type, and a geeky nerd. You know the movies and you know the channels that have the gall to air them, too. The problem is that, for the most part, they are nothing but cheaply-made crap. As for the "actors," well, the less said about them the better. Thankfully, however, there is the occasional gem in what is now a huge ocean of stinking sewage.

All of this brings me to Exists. It's a 2014 movie I have now had the opportunity to see on a couple of occasions. Exists, I'm pleased to say, is a welcome relief from the kinds of movies that I gave up on years ago. Written by Jamie Nash and directed be Eduardo Sanchez, Exists employs actors who actually know how to act. If only so many other film-makers would do likewise! Exists is very much a "found footage" movie, which many may not find surprising, given that Sanchez was the co-director of the 1999 hit movie, The Blair Witch Project.

Our group is comprised of Matt, Elizabeth, Todd, Dora, and Brian. When their vehicle slams into something strange and unidentified late at night, and as the group heads to a cabin in the woods, you just know things aren't going to go well. And they don't. Not at all. We're talking about an enraged Bigfoot taking out its ferocious fury on our ill-fated team. But (and without giving away the plot), that same Bigfoot has a very good and justified reason for getting mad. As is so often the case in the real world, it's us, the Human Race, that blunders around, causing tragedy and disaster in the process. The Bigfoot is merely responding to our actions.

Thus begins a cool and atmospheric production that makes great use of dense forestland, spooky shadows, something in the woods, and a profound sense of menace-meets-mayhem head-on. Whereas Bigfoot is so often portrayed in movies as a lumbering and slow-moving beast, that's most definitely not the case in Exists. Our Bigfoot is practically an Olympic runner. That becomes very clear when we get to see some entertaining footage of the monster racing after one of its doomed victims - who is trying, but failing, to flee on a bicycle. Bit by bit, and piece by piece, we learn that when we piss it off, Bigfoot rarely takes prisoners. It will, however, have no qualms about pulverizing you into the ground. 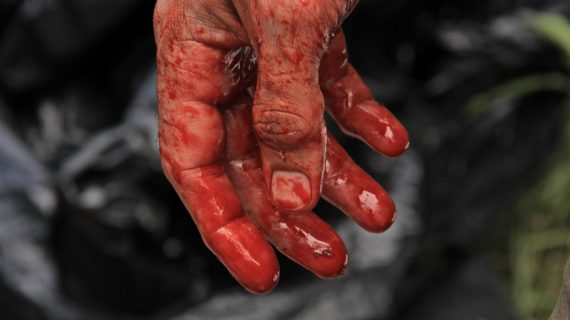 As Exists progresses, an answer surfaces as to why this particular Bigfoot is showing such hostility, and why it's wiping out the group, one by one. It's an answer that demands we look at Bigfoot in a very different light. The term "monster" is hardly appropriate for the creature, as finally becomes apparent. As far as the cast is concerned, there is not even a single winner in this movie, but there are certainly losers and victims. Some of them are human and others are not. Exists, however, is no loser. It's a very well-made movie. And it's a thought-provoking movie, too.

If Bigfoot and cryptozoology are your things - whether in reality, in fiction, or in both - check out Exists, if you haven't already seen it. Now, if only I could forget that one about the Chupacabra.