Back in 2006, Anomalist Books published my book, On the Trail of the Saucer Spies. It was a full-length study of how and why numerous people within the field of Ufology became the subjects of official interest and surveillance. When word of the book got out, many people assumed those same UFO researchers and witnesses were watched because they were getting too close to the truth behind the UFO phenomenon. Wrong.

As I demonstrated time and again, the surveillance typically occurred because the relevant people had other things going on in their lives; sometimes very controversial things. Take, for example, the FBI's file on George Adamski. The dossier on Adamski wasn't opened because of his claimed contacts with long-haired, human-looking ETs. Rather, action was taken because Adamski was telling audiences - and sizable audiences, too - that his cosmic buddies were commies, that communism was the way of the future, and that Russia would dominate the years ahead. All this at the height of "Reds under the beds" scares. No wonder J. Edgar Hoover sat up and took notice.

Matthew Williams is a Welshman and one of the few people arrested for creating a Crop Circle ("criminal damage" being the actual charge). Williams also spent a great deal of time, in the 1990s, securing high-res, close-up photos of certain UK military installations. They were military facilities Williams suspected housed crashed UFOs and the remains of dead aliens.

A significantly-sized file on Williams was opened by the British Police Force. Not because he was about to blow the lid on the British Government's very own Roswell-like events. Nope. It was because the authorities thought Williams may have been in cahoots with terrorists. Namely, the Irish Republican Army (IRA). Files show that the IRA-Williams links were actually none-existent, but those same files also make it very clear it was this suspicion - rather than UFOs directly - that worried UK authorities. For a while, at least. 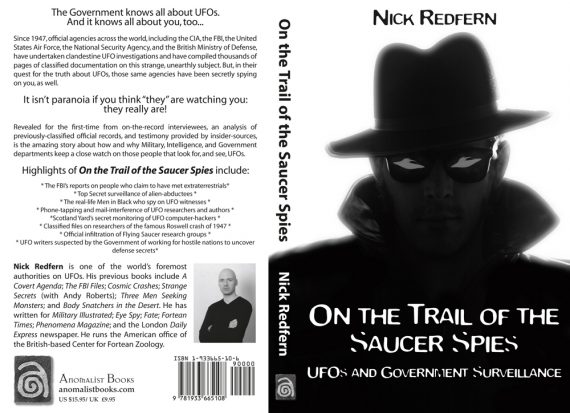 Other UFO investigators - as On the Trail of the Saucer Spies shows - became the subject of government files due to their connections to extreme right-wing groups. All of which brings me to another file, one which surfaced too late to detail in my book. It's the 40-page file on the late George King and his Aetherius Society, a copy of which was provided to me by Dr. David Clarke, and which was compiled by the British Police Force's Special Branch.

On May 26, 1957, an article appeared in the UK's Empire News. Its title: "Flying Saucer Clubs Probe." According to the newspaper: "'Warnings' from outer space against Britain's H-Bomb tests published in a flying saucer magazine take a similar line to Moscow-inspired propaganda. The 'warning' - in a special issue of the magazine - is being scrutinized by Scotland Yard's Special Branch. It is suspected that a number of flying saucer clubs - and some spiritualists as well - are unwittingly being used by the communists. The warning appears in the magazine of the Aetherius Society, which circulates widely among flying saucer enthusiasts."

While references to the Special Branch file appeared in the Empire News, the file itself was not declassified until the 2000s, when the aforementioned Dr. David Clarke obtained a copy, under the terms of the UK's Freedom of Information Act. The file is very revealing, and makes for intriguing reading. It makes it clear that Special Branch had no interest, at all, in UFOs as unexplained phenomena. But, people within Ufology were quite another kettle of fish.

Special Branch noted that "King is obviously a crank." However, SB personnel took careful notice of what was afoot in the world of the Aetherius Society, as the following extract from one particular document reveals: "Since 1st June 1957, the date of the last report about the Aetherius Society, this organization has remained active in its campaign against nuclear weapons tests, and in this respect its policy is closely allied with that of the Communist Party. However, there is still no evidence of open communist association with the Society."

Special Branch files make it clear that the Aetherius Society was watched fairly closely in the late-1950s, and particularly so in relation to public meetings the society organized in that same time-frame. One such event occurred in London's Trafalgar Square. Special Branch noted that a portion of the event was "...devoted to almost incomprehensible rubbish about Venusians and Martians, and how the Aetherius Society was in touch with superior beings from Galactic Space..."

And then there's this from the same document: "It appears that the Aetherius Society is pacifist insofar as war is abhorrent to the 'Cosmic Parliament,' and in like manner is aligning itself with the demand for a cessation of nuclear tests and the abolition of nuclear weapons." The file continues in similar fashion, with further references to (a) newspaper articles on the Aetherius Society and (b) Special Branch's surveillance of the society's activities, primarily in the London area.

Once again, we see a fascinating, official file compiled on a well-known figure in Ufology. But, for reasons that revolved around matters not directly connected to the UFO phenomenon. Yes, government, military, and law-enforcement agencies most assuredly have taken an interest in many people engaged in UFO research - and for decades. I have yet to find a single file, however, where that interest revolves directly around the UFO puzzle itself. The UFO angle is always tangential. So far...