It turns out the answer is “yes.” According to a report in the current edition of Biology Letters, scientists at the University of Sydney have successfully trained wild yellow-spotted monitor lizards (Varanus panoptes) – called goannas in Australia – to avoid eating deadly cane toads. 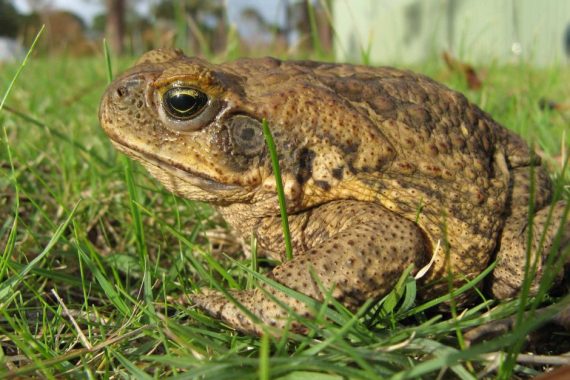 The cane toad story is well known. Introduced in 1935 to control beetles in Australian sugar cane fields, the poisonous amphibians (Rhinella marina) are responsible for decimating the populations of a number of native reptiles, snakes and crocodiles, including reducing the goanna population by 90 percent. Since there’s 200 million cane toads on the island with no enemies, getting rid of them is not an option.

That’s why researchers led by Georgia Ward-Fear decided to try the novel approach of training goannas to avoid the toads. Working in the Kimberley wilderness in northwestern Australia, they provided non-lethal but still foul-tasting young cane toads to wild yellow-spotted monitor lizards. Ward-Fear said it took an average of two tastes of toad to teach the goannas to avoid them. When exposed to adult poisonous toads, the trained goannas turned up their noses while untrained lizards dined and died.

Is this a long-term solution to the cane toad problem? Ward-Fear says goannas trained 18 months ago are still alive despite being tempted by toads. It remains to be seen if they can pass their life-saving aversion to their offspring or to other observant monitors. Training with tiny toads is tedious but there’s no way to have them self-destruct before growing to toxic adulthood.

Toad aversion training in goannas is a localized, small-scale solution at best, but anything that helps save at least some of these magnificent lizards in the wild is worthwhile.

First Visible Light in Black Hole Could Be Seen by Amateurs