Meanwhile on the Campaign Trail: Mainstream Media Continues to Play Down UFOs

The subject of UFOs is seldom--if ever--given serious treatment in the arena of U.S. politics. Notable exceptions to this have included Senator Barry Goldwater's personal inquiries into the subject, as well as Gerald Ford who, while serving as a Representative in Michigan, proposed an open hearing on UFOs in response to the number of sightings being reported by his constituents. Rather famously, in response to Ford's proposed hearing, then head of the USAF's Project Blue Book, Lt. Col. Hector Quintanilla, retorted that, "When I heard about Congressman Ford’s proposal I had to shake my head and laugh. An open hearing would be a circus and I didn’t want any part in it."

As illustrated here, it has often been the case that when a US President or other politician has taken interest in the UFO subject, the derision comes not from fellow politicians, but instead from one of three other areas: government agencies (as with Quintanilla above), skeptical members of the scientific community, or the mainstream media.

As reported previously here at Mysterious Universe, recent evidence of the latter of these was made apparent following news that Democratic hopeful Hillary Clinton, during a campaign stop at the offices of the Conway Daily Sun, had pledged to "get to the bottom" of UFOs. More specifically, Clinton said that at the urging of staffer John Podesta (who has his own long history of interest in the UFO subject), she would hope to release any government UFO files still withheld from the public, and referenced a "task force" in response to the enduring air of mystery appended to Area 51.

In likelihood, Clinton may have been "playing politics", and employing a bit of charm when she engaged journalist Daymond Steer and the staff of the Conway Daily Sun in response to Steer's UFO question. However, there is little doubt that Clinton has some genuine interest in the subject, just like her husband did during his presidency.

In fact, Bill Clinton had been quite well known for his interest in UFOs, following an initiative to the Clinton administration spearheaded by Laurance Rockefeller aimed at disclosing information on the subject during his presidency. Finally, the former president's discussion of the subject on Jimmy Kimmel Live in 2015 further illustrated his efforts to secure that information, candidly telling the late night host that if he had found anything, he would have given this information to the public. 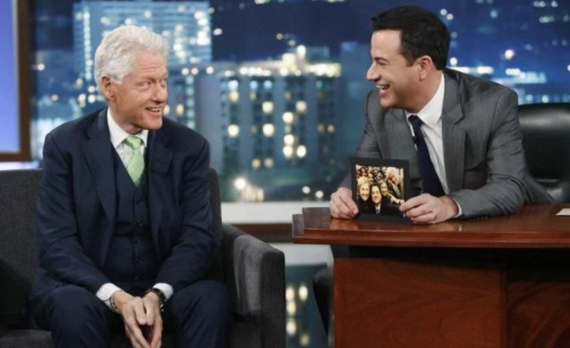 Considering the likelihood that Clinton had been serious when she discussed UFOs at the Sun offices, it is amusing to compare Clinton's, and her campaign chairman John Podesta's attitudes toward the UFO subject, to the treatment being seen elsewhere in the media. Most notably, a recent CNN article took great pains to emphasize that Clinton had merely been "joking" when she addressed the subject.

In the CNN piece, writer Eli Watkins worked hard to establish that Clinton's attitudes had been less than serious:

During a meeting with The Conway Daily Sun, Hillary Clinton jokingly pledged to look into UFO's, an article from the New Hampshire paper says.

"Yes, I'm going to get to the bottom of it," Clinton said, tongue-in-cheek, in response to a question from reporter Daymond Steer on UFOs.

Maybe it's understandable why the media's general attitudes toward Clinton (and Podesta's) UFO interests would seek to play things down. First of all, from a general ideological standpoint that perceives UFOs as purely fiction--or at very least the stuff of "conspiracy theories"--it's natural that many would assume Clinton, a Democratic frontrunner and likely future US President, could only have been joking. Further, in the event that she had been serious, media outlets of a more liberal leaning might be very likely to play down Clinton's statements, so as to help remove any perception that her UFO interests might be damaging to her campaign. (Then again, could anything be more damaging than going around saying that we should ban certain religious groups from being able to enter the United States? Maybe a little chit-chat about UFOs wouldn't be so damaging after all... but I digress).

Needless to say, we have had numerous instances where UFO beliefs among candidates--particularly among the Democratic party--has made its way into political discussion and debate. Back in 2008, New Mexico Governor Bill Richardson had been similarly castigated for expressing interest in reviewing the Roswell UFO Incident, his home state's most famous UFO case. The subject was even brought up during Democratic televised debates, along with Dennis Kucinich's reported observation of a "triangle" UFO outside the home of actress Shirley MacLaine, to which he had previously written that he felt some kind of a spiritual connection.

The last thing we want, of course, is a bunch of politicians running around saying they believe in UFOs. I mean, that's just not setting a good example for leadership, right?

Quite the contrary, maybe a general interest in the subject among our presidential hopefuls is a good thing. Furthermore, with the proper guidance, and responsible initiatives in place to help maintain that any future investigation of the phenomenon would be scientific, and most important of all, impartial to polarizing attitudes that exist already about UFOs, then perhaps political interest in the UFO subject might indeed be helpful. It might eventually help bring about greater transparency in government in a variety of different ways, as well as the potential for new scientific discoveries beneficial to humanity. But let's be clear: either of these "hopeful" scenarios might be the case, with or without any need for trying to "prove" the existence of alien life, or that UFOs even have anything to do with the subject. Again, we need to be unbiased, and objective in our aims with future UFO studies... whatever results they may yield.

Just don't tell that to our mainstream media shills, of course, who despite attempting to be "fair and balanced", usually make it quite clear what their thoughts on the UFO subject are... which in truth, only shows how little they know, and how little they've actually spent any time thinking about it at all.

The Strange Mystery of the New Orleans Axeman