On December 16 of last year I wrote an article here at Mysterious Universe titled "UFOs: 'Elimination of Non-Military Personnel.'" It began as follows (QUOTE): "As anyone and everyone with knowledge of the UFO phenomenon will be aware, the entire subject is steeped in controversy. But some aspects of the UFO phenomenon are more controversial than others. And then there are those aspects that are really controversial. All of which brings me to today’s article. In 1997 I interviewed the well-known British UFO investigator, Jenny Randles, regarding a strange series of events she found herself in, back in late 1986. It was a very curious saga involving allegedly classified documents, dead aliens, crashed flying saucers, and much more."

The article continued: "It all began in October 1986, when Randles came into contact with a man who had then recently left his employment with the British Army. According to the man, he had in his possession a large stash of still-classified material on UFOs that he had acquired under very controversial circumstances. Well, despite the nature of the story, Randles agreed to meet with the man – named Robert – at a location in the English town of Eccles, which wasn’t at all far from where Randles lived. Also along for the meeting with Robert was Peter Hough, a friend of Randles and a fellow UFO investigator." (END OF QUOTE).

When the article was published, a number of people contacted me to inquire if there was anymore to the story. Well, actually, yes, there is more to the story. In the article I focused most of my attention on the means by which Robert allegedly obtained the files - as well as information he shared with Randles and Hough on the aforementioned "elimination of non-military personnel." However, when I interviewed Randles back in 1997, much more surfaced than was contained in my December article. So, I figured now would be a good time to reveal the rest of the story.

Jenny Randles told me: "There were a number of specific case histories, including a case which, Robert said, involved a UFO which had crashed somewhere in England in 1980. Robert couldn't remember where exactly in the country this was supposed to have been, but he said that there were definitely photographs of the object and it was incredible. It was at night; it was a disc; and it was surrounded by lights. Some of the things that Robert said about it suggested the Rendlesham Forest case. For example, he said that the crash was in connection with a military base which was nearby. That's why it was covered up so effectively."

She continued: "It was blatantly obvious to both Peter and I that much of what the files referred to was the Roswell crash. Robert said that there was mention of a UFO which had crashed somewhere in the western United States in 1947, and that wreckage and bodies were found. Robert wasn't saying this in an overenthusiastic way. It was all done very methodically and matter-of-factly. And that was one of the most convincing aspects of what he was telling us. But you could hear the awe in his voice, as if he'd never come across any possibility like this before." 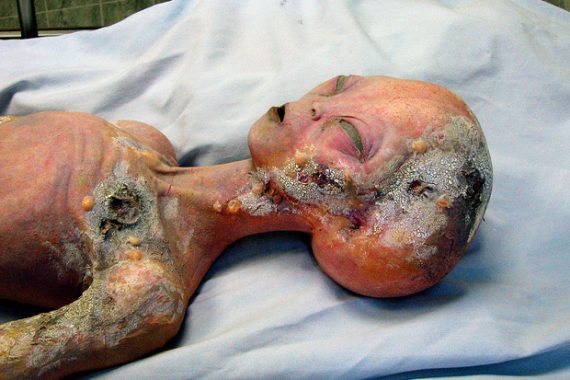 Randles also said: "There was a lot of material about Roswell, including photographs of the UFO and of the aliens. One of the most detailed files was an autopsy report on one of the bodies recovered from the Roswell crash. Robert remembered the name of the doctor who had written it. His name was Dr. Frederick Hauser, a name I'd never seen connected with UFOs in any way whatsoever. Robert said that there was a very detailed account that was mostly filled with medical jargon about the autopsy which he didn't understand, and there was a photograph of this entity with a slit right down the middle from the neck to the navel."

And there was still more to come, as Jenny Randles demonstrated to me: "One of the first things Robert said was that the aliens were very human-looking. He said that the head was completely bald, but the most unusual feature of the face was the nose, which was almost flush into the face, almost unnoticeable. He couldn't tell from the photographs, but the autopsy report made it clear that the beings were slightly smaller than average human size - about five feet in height."

Perhaps, now, someone will dig deeper into the matter of all this, including the story of Robert, and the reference to a Dr. Frederick Hauser. Anyone up for the challenge?