Space Beyond Space: The Divide Between Science and Modern Philosophy

One of the very greatest questions to confront humankind has to do with the origins of our universe, and whether there is indeed an "origin point", or if the universe as we know it may indeed be timeless, at least in a sense.

Modern astrophysics seems to suggest that there was indeed some kind of a starting point, as evidenced by the observable expansion of the universe and all matter within it. Such observations form the foundation upon which the concept of a "big bang" rests, with the constant outward motion of stellar bodies evidence of a point in our distant past--the outset of the universe, as it were--during which all of space and time existed within a single, point of virtually infinite density (this is called a singularity), in which even the laws of Einstein's ever-reliable theory of general relativity appear to break down.

Ever troubling to the scientist is the philosophical question of whether, if our universe had a point of origin, there might also have been (or could still be) something outside the boundaries of the universe as well... a "space beyond space", as it were. Of this, physicist and Lucasian Professor of Mathematics at Cambridge University, Sir Stephen Hawking, argues that, since anything beyond (or in this case, also before) our universe exists outside of observable scientific laws, it is therefore a concept that science does not address. (I will note here that, as we are discussing the possibility of those things "beyond" our universe, if such a state is to be considered, we will draw the necessary distinction here between those things presumably "outside" our universe, in a physical sense, and such similar, but unrelated ideas as a multiverse). 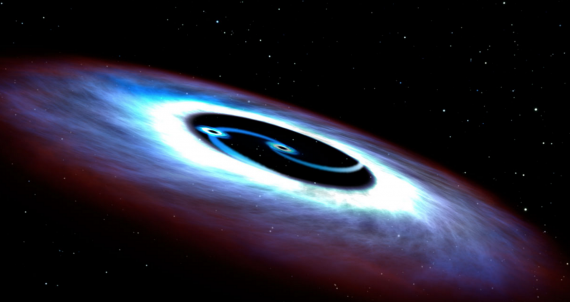 Left to the philosophers for consideration, Hawking similarly expresses of such questions that philosophy has not kept up with science, citing Ludwig Wittgenstein's fascination (and to an extent, perhaps preoccupation) with the relationship between concepts and human language as being evidence that language was all there is left for study by the philosopher of the 20th century. "Philosophers reduced the scope of their inquiries so much that Wittgenstein, the most famous philosopher of this century, said, 'The sole remaining task for philosophy is the analysis of language.' What a comedown from the great tradition of philosophy from Aristotle to Kant!"

"The people whose business it is to ask why, the philosophers, have not been able to keep up with the advance of scientific theories," Hawking wrote in A Brief History of Time. Hawking succeeded in outlining the divide that has been steadily growing between philosophy and science (and of course, let us be clear in noting that all of this remains a matter of ongoing debate between philosophers and scientists). However, one might argue that Hawking's estimation of Wittgenstein's views toward language may have been taken slightly out of context.

To be brief, rather than saying that language was all that philosophers had left to study, one interpretation of Wittgenstein's work may be that language formed a sort of barrier between concepts, and that by recognizing this, certain philosophical (and perhaps scientific) conundrums might be freed, as if releasing the proverbial fly from the bottle. In a sense, we might infer that Wittgenstein would have applied this same logic to all manner of observable things in our universe, and hence, it was not "merely language" that his work sought to address. Conceptually, his views toward reality, and knowledge capable of being obtained by humankind (as expressed solely through language, along with mathematics), had much deeper implications.

Much more could be said of the divide between scientific thought, where physicists from Hawking to Feynman have been famously critical of philosophers of science, while philosophers maintain that their fundamental questions about the universe, rather than hindering or "falling behind" science serve to balance scientific inquiry. But returning to the question over the universe's origins, and whether it represents some kind of finite, or to the contrary, an infinite space, the debate between the Hawking and Wittgenstein viewpoints has led to some interesting conjecture regarding notions of what, if anything, might exist beyond or "outside" our known universe.

Writer Giles Humphrey presents an excellent essay on this subject at his website, titled "Wittgenstein Versus Hawking - The Impossibility of Infinity", in which he addresses such concepts as the breakdown between the outlook of physicists such as Hawking, as it relates to concepts of infinity. I'll note here that, although Humphrey is a writer and a journalist, rather than an astrophysicist or philosopher, he notes at his site's page on philosophy that, "I am vain enough to believe that both the articles on this page are philosophically significant," and I would agree that the one referenced here offers some rewarding concepts for the careful reader. Specifically, on this troubling notion of "space beyond space", Humphrey includes the following passage, which is worthy of consideration here:

"Perhaps, following the “outer outer space” model someone might seek to show only that space stretches "infinitely" far ahead of us. One could propose a kind of pure space, a complete absence of anything, waiting to receive the expanding universe, that is an “outer outer” space. But this would be to confuse the absence of anything for the presence of something. If someone insisted on talking in this way, and declared this “pure space” to be “infinite”, then I could understand them only if I took them to mean that “infinity” = nothing. In either case I can't see any way of proving that a flat universe is simply connected and thus "infinite". An "infinite" plane is a mathematical concept, in practice one imagines a plane with fuzzy edges, a kind of note to self that the plane can always be extended. One can't actually get to the edge of the plane and see it has no edge."

While the passage above is conceptually relevant, I advise that those interested in the subject read Humphrey's entire essay at his website, so that the passage can be taken properly into the broader context of its discussion about infinity, and whether such an idea is conceptually feasible.

More specific, perhaps, to the divide between Wittgenstein and Hawking's outlook had been the latter's own assertion of the primacy of the former. Dino Jakušić of the University of Warwick authored an insightful paper on this, titled "Stephen Hawking and the death of Philosophy" (Dino's essay can be read here). In it, he underscores the fundamental misunderstandings of Hawking's derailment of philosophy, but with specific regard to Wittgenstein, addresses the question of why Hawking would ascribe such significance to he alone, in calling him "the most famous philosopher of this century"... and perhaps misinterpreting "fame" as being equivalent to influence:

Hawking's claim about Wittgenstein being the most famous philosopher of 20th Century is questionable. Regardless of the question of fame, it is very contentious to take Wittgenstein as the representative of the whole of philosophy of the 20th Century. Firstly, both "Wittgensteins‟, one of the Tractatus and the other of the Philosophical Investigations can be seen as some sort of anti-philosophers. First makes his attempt in solving all the problems of philosophy by logical reductionism, the other claims that “philosophical problems arise when language goes on holiday."

Jakušić continues to say that, "Wittgenstein left the minimal trace within contemporary Continental tradition. Even within contemporary Analytic approach philosophy of Wittgenstein, Ordinary Language Philosophy or the philosophy of Cambridge Wittgensteinians seems to have been pushed away by the influence of Oxford and USA scholars.""The main question we should be asking ourselves,"Jakušić concludes, "is why has Hawking's criticism, so flawed and unsubstantiated as it is, been so resonant at all?"

Physicist Richard Feynman, who was mentioned briefly a bit earlier in this post, was traditionally (if not famously) critical of philosophers of science, and to a somewhat lesser extent in recent years, Hawking has continued to promote this sort of position. Few would (nor could they) debate the importance of either of these gentlemen, let alone their numerable contributions to our understanding of the physical universe. But does this remove questions like those Ludwig Wittgenstein had addressed with his philosophical researches into the divide between language and conceptual thought, and what relationship they may have to the study of the physical sciences? In equal measure, if notions of anything "before" (or after) the big bang, and thus beyond the known universe aren't questions that science seeks to address, does that rightly remove them from falling within the purview of modern philosophers?

Separate though they may be from the modern physicist in thought and approach, our philosophers are very much still relevant, and there are indeed rewards that philosophy can still offer the modern thinker. While we continue to deal with such questions about the nature of reality, as well as the origins, and ultimately, the fate of the cosmos, philosophy may be able to lend guidance, balance, and even a degree of hope for the deeper questions we have about the universe, and what role we play within it.

The Myriad Mysteries of the Florida Everglades