So, you know what a nuclear bomb is, right?  Of course you do.  Everyone does.  The very idea is ubiquitous throughout human culture.  Do you know how a nuclear bomb works?  That’s another matter entirely, isn’t it?

It’s actually not that complicated.  Well, the basic concept isn’t.  Getting one to explode is another story.  You’ve heard the term “splitting the atom” right?  That was the big breakthrough proposed theoretically in 1938 by several scientists, then experimentally confirmed in 1939 by Otto Frisch, and then eventually realised as a weapon by The Manhattan Project back in 1945, forever changing the world and its prospects for survival.

Essentially, what happens when you split an atom – meaning the breaking open of the nucleus of an atom (hence the term nuclear) – is that an enormous amount of energy is released.  Which, obviously, is quite handy when your goal is death and destruction. 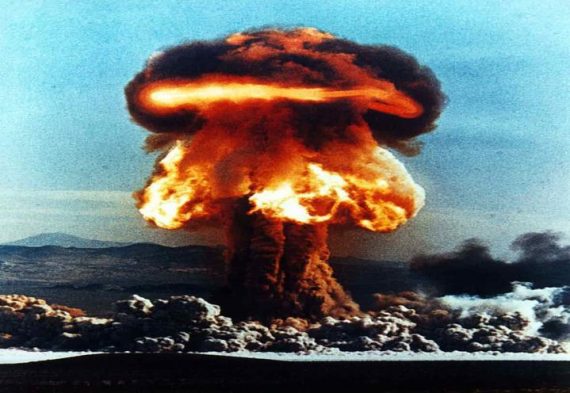 When we refer to “splitting the atom”, we’re not talking about taking a really tiny knife and chopping an atom in two.  The term refers to an induced fission reaction.  Fission is the name for the entire process, and in this case it begins with neutron bombardment.  What happens is, an atom, uranium-235 for instance, is struck with a tiny particle called a neutron, like they do in particle accelerators such as the Large Hadron Collider at CERN.  That collision causes the uranium-235 to briefly change into uranium-236 (a slightly heavier element).  The excitation of the particles caused by the collision in turn causes the atom to split apart, releasing the faster-moving, lighter elements within (fission products), as well as the free neutrons it contains.  Those particles, once separated, spread out from the nucleus at extremely high-energy, which is what provides the power…or destruction.

So, as mentioned, the process is relatively simple, but building and detonating a nuclear bomb is not something one can do accidentally.  It takes a great deal of technical knowledge, equipment, resources, and money.

It’s a slightly different story for a fission reactor, though.  The process is nearly identical, as is the result.  The kinetic energy of the fission products in a bomb are allowed to continue expanding, releasing that energy directly into the environment (and destroying anything in the vicinity), but in a reactor that energy, along with the electromagnetic energy from the gamma ray bursts is converted into heat energy when the particles collide with the atoms of the specially constructed reactor material and its active fluid (usually water).  That heat energy is then used to power steam turbines to produce electricity.

You’ll notice the distinct lack of explosions related to fission reactors, with some pointed exceptions.  But as with bombs, the process requires an initial input of energy to get the reaction started.  You might wonder though, as I did, why this doesn’t happen naturally, and the short answer is…it does.

The Sun, of course, is actually a giant nuclear fusion reactor.  It does the same thing any nuclear power reactor on Earth does, except it doesn’t split the atoms, it fuses two or more smaller atoms together by way of gravitational pressure (which is the difference between fission and fusion).  But the Sun, and its many billions and billions of star cousins, aren’t the only places these reactions happen spontaneously.

They’ve happened here on Earth too, a very, very long time ago.

The continent of Africa still holds some secrets, and one of them resides at Oklo in the Central African state of Gabon.  Oklo was at one time Europe’s richest source of energy grade uranium.  France operated several mines in the region for decades, until eventually the supply was exhausted.  The uranium mined at Oklo has been used in nearly every nuclear reactor in Europe, but in 1972 it was discovered that there was something odd about some of the samples.

French physicist Francis Perrin found that comparisons of uranium-235 from several sites brought up clear discrepancies.  Uranium ore, like any ore, is found in different places all over the world, and the ore from each location has subtle differences that can be used to trace the origin of the enriched ore later in production.  Normally, Oklo’s ore had a uranium-235 content of 0.7202%, but some samples were found to contain a concentration of only 0.600%, which is a considerable difference.  It was almost as though the uranium had already been inside a reactor…it was depleted as though it was already used.

Upon further study it was found, quite remarkably, that the uranium deposits at Oklo, in some sixteen different locations, had undergone spontaneous fission inside a naturally occurring reactor approximately 1.7 billion years ago.  Special conditions were indeed needed for this to occur.  It turns out that the ratio of 235U to 238U just happened to be nearly the same as is used in today’s nuclear power reactors, and all that was needed was for the introduction of ground water to act as a neutron moderator and voila![1]  You’ve got yourself a spontaneous fission reactor.

Despite the fact that the Oklo reactors are the only ones that have ever existed on Earth, we actually know a great deal about when it occurred and for how long.  It’s been determined, by studying the decay products of the reaction – such as the amount of xenon in the surrounding material – that each reactor was active on a continuous cycle of thirty minutes of criticality followed by two hours and thirty minutes of cool down.  And this went on for several hundred thousand years.

Interestingly, some believe that a spontaneous fission reaction such as those at Oklo, which may have taken the form of a detonation rather than a reactor, may have been the explosion event that created Earth’s moon.  While not a widely accepted hypothesis, the idea does have some evidentiary support, though so does its competition, the giant impact hypothesis.

It’s also thought that Mars, which is thought to have an abundance of radioactive uranium, thorium, and potassium, might have experienced these types of localised spontaneous fission reactors as well, in the very distant past.  Which may offer future Mars explorers a source of energy on the red planet, if we ever do get there.

So now you know how a nuclear bomb works, and how nuclear physics, with is complicated math and confusing terminology is actually fairly simple, when you get right down to it.  It’s so simple, in fact, that Mother Nature can do it all on her own.

[1] Normal ground water was sufficient at the time because the 235U content was higher than it is now.  The same reaction today would require heavy water, with a significantly higher hydrogen content.

The Mushroom Death Suit is Ready to Consume Your Body