The Amazing Case of the Fireproof Woman

The human body is a complex, little understood system of genetics, cells, bone, blood, muscle, and physiological processes which try as we might we have never really been able to truly comprehend. It seems the mysteries of the human body go deeper than we imagine, and throughout history there have been the occasional individuals who have stepped forward from the unknown to demonstrate abilities far beyond what we would call normal, and who have called into question just how much we truly know about the extant of human potential. These are the people who have challenged our notions of what we are capable of, and perhaps offered a peek into the vast, undiscovered and untapped realm of the powers of the human mind and body. In the 1800s, one such exceptional person burst onto the scene; a lady who seemed to be impervious to the effects of not only heat and fire, but even corrosive acid. She is an enigmatic case which has never truly been solved, and which leaves one to wonder if there are perhaps hidden realms of the human form which we have not yet begun to fully understand.

One very common circus act is that of the fire-eater. This persistently crowd pleasing act involves the performers inserting hot, open flames into the mouth, which seems very impressive but is actually possible due to a very simple set of techniques that revolve around the unwavering rule that heat travels upwards. A fire-eater will typically lower the flame from above, its heat traveling upwards rather than down towards the mouth, and the performer will slowly exhale to further ensure that they are not burned. As the fire enter the mouth, the wick, which is usually made of kevlar and is actually quite cool to the touch, is placed against the tongue and the performer will either very quickly engulf the flame with their mouth to put it out through lack of oxygen, or use a powerful, sharp exhale to essentially blow it out. It is all based on rather simple physics, although it can take years to master to the point where it is completely safe while at the same time looking impressive to audiences. And impressive it is, with a good fire-eater able to wow even people who are well aware of the tricks they use. 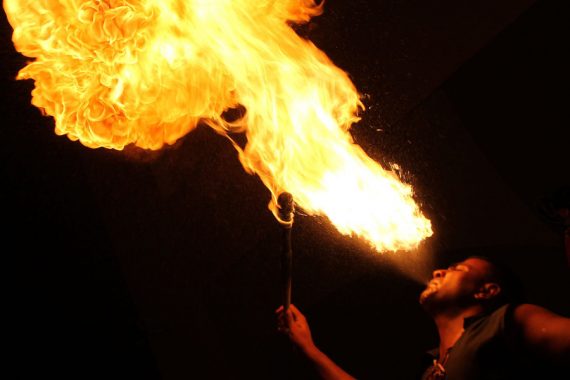 However, back in the early 1800s there emerged a rising star in the world of fire-eating who was more than just impressive, exhibiting skills that went beyond the tricks of the trade and indeed extended into the realms of the decidedly bizarre. In the days when traveling sideshows were all the rage, one young woman in particular started to make a name for herself in a rather extraordinary way. Jo Girardelli was a performer born in Italy in the 1780s, and she quickly made a name for herself with her baffling act throughout Europe and England in around 1810. It was here that both public audiences and private ones comprised of society’s wealthy went away stunned, astonished, and baffled by her stupefying, dangerous acts. A typical Girardelli show began with a bang, with the young performer doing several astounding fire-eating feats before taking straight nitric acid into her mouth, where she proceeded to casually swirl it around and gargle it. Lest the gawking onlookers think that she had just imbibed some harmless substance, Girardelli would then proceed to spit the highly dangerous acid out onto an iron bar, where it would smoke and eat away at the metal, while her mouth remained miraculously unscathed.

This was perhaps already incredible enough, but in Girardelli’s show, it was just the warm up. Usually she would follow the acid trick with a perhaps even more amazing exhibition, where she would drink a dish of boiling oil without any injury. Typically, this trick would involve her heating up a plate of oil until it was frothing and boiling over, and just for good measure she would often proceed to cook a raw egg in the oil so that everyone would know she meant business and that there was no trickery involved. After this, she would take the pan of oil and pour it into her mouth without the least hint of pain or discomfort, and swirl it around for awhile as the shocked audience looked on before spitting it onto a roaring fire where it would ignite into a ball of flame, or onto wood where it would sizzle and crackle. There was no evidence whatsoever that Girardelli had been burned or injured in any way by the scalding oil, or indeed that she had even experienced any pain at all.

With these acts, Girardelli was already gaining notoriety throughout Europe, to the point that she was proclaimed the “Queen of the Fire Eaters,” but her steadily escalating displays of superhuman feats would not end there. She came up with a new trick which involved her putting hot, molten sealing wax into her mouth and then asking a member of the audience to come make a seal impression with the wax as it sat seething upon her tongue. In every instance the audience member was unable to find any evidence of trickery or illusion, each time stating that the wax was indeed hot enough that they could feel the waves of heat wafting out of the woman’s mouth.

This display still was not enough for the ambitious performer, and Girardellli moved on to even more brazen displays of her apparent immunity to being burned. In later tricks, she would take a vat of scalding molten lead and then scoop some of it out with her bare hands to deposit it within her mouth. After letting the incredibly hot lead languidly swill around within her mouth for a time, Girardelli would then produce coin sized pieces of solidified lead, demonstrating that it had actually cooled and congealed within her mouth without causing her any harm whatsoever. Close inspection of her mouth and indeed her hands would turn up no evidence of the severe burns that should have been present there. 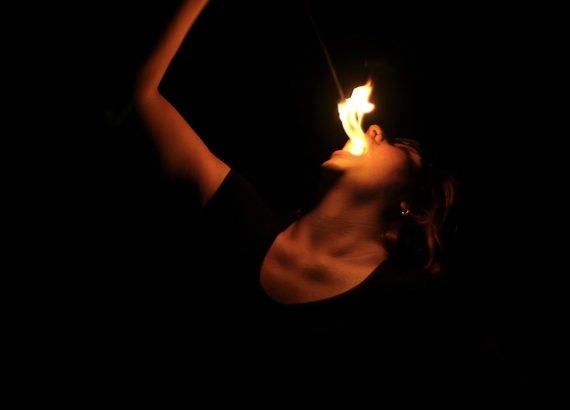 Adding to her repertoire was an act in which she would heat up a shovel over an open fire until it was glowing hot, then press it against her body and hair, with no indication that she was being burned in any way. To top off this brazen defiance of the laws of physics, Girardelli would then press the red hot shovel against her tongue, where it would ominously sizzle and steam, yet leave her unburned and unfazed. With such mesmerizing displays, Jo Girardelli became a sensation across Europe and of course there were those who wanted to know her secrets, but all she would divulge was that there was a “secret composition” involved. In addition to the perplexed populace, even scientists weighed in on the bizarre young woman’s abilities, and came to the conclusion that there was no known form of protective oil, cream, or ointment which would be able to protect her from the kind of searing heat and the corrosive materials she was constantly subjecting herself to. Skeptics were also keen to jump on the act, subjecting Girardelli to controlled trials where they could sniff out any obfuscation or trickery, but they were never able to find any indication that illusion was involved. For all appearances, Jo Girardelli really was unable to be burned.

Then, as suddenly as she had risen to fame as one of the most awe inspiring acts the continent had ever seen, she was gone. There appears to be no record as to what happened to Jo Girardelli after this, with speculation running from the idea that she retired to live a normal life, to others who say she merely continued her mind-blowing feats in other locales. Who was this marvel of a woman? Was this just someone well versed in the arts of trickery and illusion, or was there something more going on here? Had she found some miraculous material that could protect her from harm, but which is now lost? Or was there perhaps in Jo Girardelli an example of a human being who has branched out into the unknown limits of our physiology and the power of the mind? Considering that there is very little in the record left behind other than her jaw dropping shows, we will perhaps be forever left to ponder these questions. Nevertheless, the case remains a fascinating glimpse into the unknown potential of the human form, a possible hint of what we are capable of, and perhaps a potent testament to mysteries of human physiology that we are nowhere near close to understanding.

The Monster of California’s Lake Elsinore