The Ancient Mystery of the Fisher King and His Holy Grail

In the 12th century, Geoffrey of Monmouth's publication of the Historia Regum Britanniae or "History of the Kings of Britain" presented a illustrative, though also highly imaginative retelling of the ancient lords of the British Isles. In it, Monmouth recalls what is arguably the most famous and legendary king of Britain, the one and only Arthur Pendragon, or as T.H. White had penned, "The Once and Future King."

White's title had been borrowed from the ancient mythic inscription said to mark the legendary king's tomb, which read "Hic iacet Arthurus, rex quondam, rexque futurus", or "Here lies Arthur, king once, and king to be." The line summarizes the ancient heroic tradition of the fallen king believed to rise again, as represented in such exhaustive mythological works as Sir James George Frazier's The Golden Bough, in which a hero king represents a timeless cycle of rejuvenation; that is, to overcome the seemingly impossible struggle between man and his greatest enemy, the gradual decline that represents the universal entropic forces themselves.

However, apart from Arthur's own story, one among the most enduring, and also peculiar mysteries related in the famous Arthurian legends is that of the Fisher King. This character is an enigmatic -- and also tragic -- ruler who is recognized in the stories as the last in a long line of Grail-keepers. Many different versions of his story exist, with the earliest telling of the paladin Perceval  (or later, Percival) coming into his company, and learning a remarkable, though somewhat strange lesson while held in his court.

Among the earliest references to this meeting between Perceval and the Fisher King is that of Chrétien de Troyes' Perceval (hence the archaic spelling of the knight's name used here). In Chrétien’s account, it is during Perceval's meeting with the Fisher King where the Grail is first spied. However, there is more to the story as well, which involves not only the mythical grail, but also another unusual relic of high-symbolism:

"Perceval then returns to his seat and continues his conversation with the lord of the castle. They talk well into the evening and enjoy a splendid conversation, but while they are speaking something odd happens. First, one of the attendants enters the great hall from one of the chambers carrying a white lance upright around its middle. The boy proceeds with the lance in between the fire and the lounge in which they are sitting. As he does so, a drop of blood emerges from the tip of the lance and trickles down the weapon to the boy’s hand. He watches in awe and amazement at the sight and longs to ask the lord of the castle about it, but then he remembers the instructions of his mentor. His mentor had warned him sternly to beware of talking too much."

The account above, excerpted from The Holy Grail: The History and Legend of the Famous Relic, is but one of many retellings of the story. Subsequent to this episode with the mysterious bloody lance, a young girl passes carrying what is taken to be the grail itself; finally, a third youth passes through the hallway, carrying a large silver platter. One may note here that, of all the three relics presented at the home of the Fisher King, it is interesting that the grail had stood out as it did among the legends; arguably, the imagery presented by the bloody lance is the more striking of the three.

On the subject of the ominous, bloody lance, while this element would later be "Christianized" in later adaptations of the story (as with numerous other elements), Chrétien’s tale describes a weapon of immense destructive power -- poisonous, even -- whose ominous characteristics aren't easily ignored. Some scholars interpret this to be a distinct characteristic that differentiates Chrétien’s narrative from the later ones adopted into an Arthurian, and decidedly Christian narrative.

Nonetheless, Perceval chooses to remain mum, at the instruction of his mentor, and thus none of the objects in this strange and elaborate little parade are explained to the hero. Later, it is revealed to Perceval that if he had merely asked about these mysteries, not only would he have obtained this knowledge, but the Fisher King's unusual injuries would have been healed; hence, Perceval learns an equally esoteric lesson: that there are certain times that are indeed right for asking questions, and that neglecting to do so may in fact be tantamount to thoughtlessness.

In some traditions, the Fisher King's injury was sustained when a javelin pierced his side, impaling him through his hip and disabling him from being able to mount his horse. However, another common interpretation had been that this injury had more directly affected the King's inguinal region, and thus his masculinity had been compromised. This directly affects his ability to rule, since his impotence rules out an ability to birth an heir, and hence the Fisher King's enduring tragedy.

Many have analyzed the mythic themes this legend represents, though among the finest of recent years had been Australian Psychologist Richard A. Sanderson, who discussed the matter thusly in his essay, "Wounded Masculinity: Parsifal and The Fisher King Wound":

"At the heart of the Grail Castle a Holy Spear and a Holy Chalice lay. The two divine implements are needed daily for The Holy Grail enactment, the eternal task of bringing light into the kingdom; for that light is the source of the cycle of life and death. The two divine implements represent the masculine and feminine principles which when combined in perfect wholeness produce light into the kingdom of the Fisher King. The Holy Chalice represents the feminine aspect of feeling and beauty that both contains and transforms. The chalice in christianized versions is that which Jesus used at the Last Supper, containing the wine and later his blood. The Holy Spear represents the masculine strength required to stand ‘erect' and guard the precious Grail... Each day every knight of the inner order (of the Arthurian tradition) would renew his oath to defend the Grail with his very life and affirm his service to the Holy Grail.

...The wound to The Fisher King, via a spear through his testicles (to the tenderest part of the male anatomy), signifies a wounding to man's sense of potency and his self-esteem. The wounding in this "private part" of himself will not heal and equates to The Fisher Kings "Fall from Grace" (the noble part of the king has fallen from grace). He is metaphorically expelled from the Garden of Eden (The Holy Grail). Interestingly, The Fisher King only gets relief from his pain when he is fishing, meaning, doing reflective work on himself. The Fisher King's kingdom has been laid to waste, the meadows and flowers are dried up and the waters shrunken. The suggestion is that any malaise to the king is mirrored in his kingdom."

Indeed, the lesson learned from the Grail mythos becomes interesting when one reflects upon the undertones of sexuality expressed in the ancient narrative, in which the grail is the decidedly feminine counterpart to the lance Perceval observed. This echoes shades of popular Davinci Code-esque modern retelling of the legends, in which the long-sought "Holy Grail" might actually have been feminine; more specifically, that Mary Magdalene, the companion of Jesus "whom he loved more than any of the apostles, and kissed often", had been his wife or partner in sexual union.

It should be noted that scholars largely dismiss that any direct evidence found in the Gospels supports this notion of a sexual relationship or marriage between Jesus and Mary Magdalene, although usage of the Greek koinōnos (companion) in reference to the relationship does present derivations that may suggest a sexual union and/or marriage, as is represented in the Gnostic Gospel of Phillip. Such interpretive analysis, as one may gather here, remains a matter of scholarly debate.

Whether the grail is represented within the context of the earlier (likely pre-Arthurian) legends of Perceval, or interpreted in relation to the life, and actual relationships shared by the historic Jesus, the quest for the legendary Grail becomes one not of a holy artifact, but of man's own longing for wholeness, and the search for completion. Much like the concept of Christian sacraments as being physical representations of a deeper spiritual reality, the legends of the Grail quest itself become a sort of tangible retelling of an intangible reality that serves as the very essence of human relations and coupling. Often it is the case that, where language fails, emotion, feeling, and symbolism prevails; hence, the quest for the Holy Grail becomes the spiritual mirror-image of our own inner quest for union with the divine, and with each other.

Addendum: It is interesting to note, shifting our attention to pop culture and science fiction for this final moment, that in the fourth episode in the ninth series of the British television program Doctor Who, entitled "Before the Flood", the villain is also named "The Fisher King". The episode was written by Toby Whithouse (though directed by Daniel O'Hara), and the role of the Fisher King, a monstrous alien with a booming, British accent in this incarnation, was portrayed by actor Neil Fingleton, and voiced by Peter Serafinowicz. 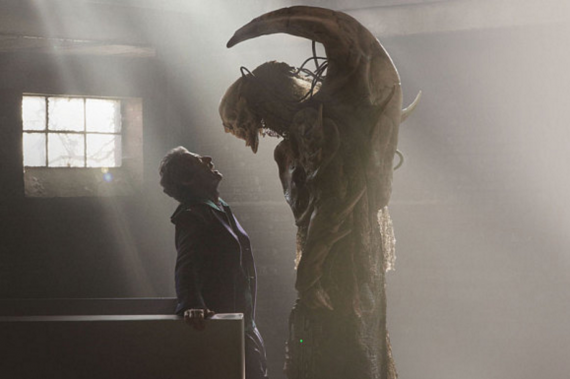 It remains somewhat ambiguous what the significance of the alien monster's name had been, although according to an article on the character at tardis.wikia.com, the comparison between the creature and the Arthurian character is made. Here, it notes that, "Having been wounded, the legendary king waits for someone who is able to heal him to arrive. This is similar to the Doctor Who character who is waiting for someone from his people to come and save him."

A Dark Flight to the World’s Most Haunted Airports