The Art of Deception: UFO Cults and Their Influence in America

"It was our first book signing," the man told me from across the table in the New York diner where we sat together, sawing on pancakes that spilled off the sides of our plates, in between sips of black coffee.

"There was a long line of people with their books, and at a certain point I looked up. There was a man standing in front of me, and it was one of those rare moments in life where my reaction was that I literally wanted to jump up from the table and back off. I never saw anybody quite like this, and it made me immediately uncomfortable."

At this point, the owner of the diner came around to our table and refilled our coffees, making his rounds and seeing that everyone's breakfast was in perfect order. It had been the Utopia Diner where my host and I were sitting that morning, and although it wasn't the likes of the Sunday brunch one might have doled out before them at the Country Club on weekends, what we were having was American, and it was enjoyable.

"The expression on his face was pretty much like this," my company says, mimicking the gaunt and unsettling visage of the strange looking man he had met at the book signing years earlier. "And I'm thinking, what can a person be thinking, to choose, or involuntarily look like that?"

As the stranger lifted one of the books, my author friend recalled asking him if he would like his copy inscribed, or merely signed, to which the pallid visitor replied in a strange monotone, just sign.

Yes, the book in question had been about UFOs: the title was Left at East Gate, and my friend recounting the story had been Peter Robbins, an author and long-time local tour guide, historian, and UFO researcher in the New York area. As with the retelling of many such stories when the subject drifts around to the discussion of UFOs, the more credulous--or perhaps merely imaginative--among the UFO crowd would cap such a story off with a peppering of wide-eyed speculation: maybe the eerie "visitor" had been a government agent; perhaps even one of the nefarious "Men in Black" said to haunt the paths of UFO researchers and unfortunate witnesses alike. Or perhaps this "man" had actually been one of them... one of the "others" that spin around in their saucers, keeping tabs on earthly happenings.

Robbins, eloquently spoken and intellectual in approach, isn't the type to offer such speculative spins on things. In fact, the reason he had chosen to bring this story to mind at all had been the fact that he felt the story was, as he put it, "an important one," and one that "needed to be told." After all, when he agreed to sign the man's book, he had asked, and in turn had been given, the odd fellow's name.

Yes, the same wild-eyed Marshall Applewhite that had preached before the Millenarian cult group known as Heaven's Gate, which culminated in a ritual suicide by 39 of the group's members on March 26, 1997.

"Most renditions by human artists of extraterrestrials are the most grotesque things that you can possibly imagine," Applewhite preached in what would be his final address before the March 26th incident. "They look like some praying mantis or some insect that has some crazy shape or form, and that's ridiculous." To the contrary, Applewhite's alleged aliens were "beautiful" beings, neither male nor female, and with no necessity for hairstyling, makeup, or the other affectations piled on by humanity for sake of presentation." 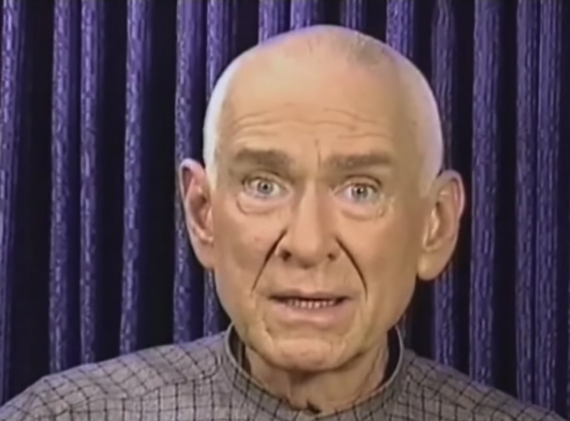 "This is your chance!" Applewhite proclaimed. "I can take you out of here. I can lead you to that new level above human." There was a caveat, of course.

"That can't happen unless you leave the human world that you're in, and come and follow me."

Which, in turn, a significant number of the cultists certainly did, following Applewhite and his insane belief in quasi-physical and otherwise physically perfect "space brothers" right to their untimely deaths.

As for Robbins and his entire relationship with the episode, once the media had been allowed into the area where the cultists had resided, Left at East Gate had been among a number of UFO-themed books Applewhite and his followers had been reading. However, the similarities between the book's title and that of the cult group immediately attracted attention, which was only fueled by the recent signature and date penned by the author on it's first pages.

As speculation about the incident unfolded, late night radio host Art Bell was also drawn into the affair, having been cited as a possible influence on the group after going on his radio program at the time, Coast to Coast AM, and describing an alleged "anomaly" that some astronomers--amateur and professional alike--had spotted in the tail of the Hale Bopp comet shortly before the Heaven's Gate group's mass suicide. (To his credit, Bell had also been among the earliest news outlets to offer an explanation for the "anomaly" in question that was backed by scientific opinions, none of which endorsed anything but natural causes underlying the appearance of the comet's tail.)

Such circumstances have, in fact, been observed for years in relation to the connections between cult groups and UFO belief. Astrophysicist and computer scientist Jacques Vallee’s own researches into UFO studies led to the formation of a new argument, over time, about how mythologies associated with UFO belief even led to the formation of such cult groups. These, in turn, have possibly gone on to influence the masses with the proliferation of their bizarre, and largely unfounded, beliefs involving UFOs, an idea that culminated in Vallee's book Messengers of Deception (1979). Notably, within the pages of Messengers, Vallee had specifically discussed the aforementioned Heaven's Gate group and their worrisome activities, a good 17 years prior to their unsettling demise.

“I think the place where ufology--the way it has developed today--meets with my interest in communications, and my interest in networks, is in deception and manipulation," Vallee said in an interview with Conspire.com in 2014 (the archived interview can be read in its entirety here). "I think that is an area of which people should be aware. Because I think a lot of the things that are being discussed today, among people who believe in UFOs, are either mythical or a part of manipulation of some sort, which could include the stories of little aliens and the hybrids and abductions and so forth. A lot of that may be either material that cults have injected into the culture because it suits their own fantasy about the end of the world or the millennium and all that.”

What one begins to see among the multitude of UFO-related mythologies present in our culture today are motifs that are indeed cult-like in their effect (and whether or not they are seen through to their potential extremities, as was the case with Heaven's Gate). Our presumed "space brothers" are far more intelligent and evolved than we are, and thus, for us to truly know ourselves, it is in our best interest to know them: the unseeable, unknowable non-entities that present themselves to us "terrestrial types" only through ambiguous flashes of light in the night sky, or through the dodgy and dreamlike communiqués that occur aboard their spacecraft. Here, after a healthy poking and prodding by advanced (or, in many cases, remarkably non-advanced) equipment, UFO abductees are told that they, and Earthlings in general, must change their ways, or Earth shall be forever doomed (little imagination is required in noting the way these "alien" messages so closely mirror our environmental concerns of the last few decades).

Granted, the majority of modern adherents to UFO beliefs that, in truth, might be likened to a sort of UFO-based spiritualism or philosophy, are not extremists. They especially would not advocate the illogical extremes that Heaven's Gate, or other similar UFO cults, have gone on to perpetuate.

Nonetheless, as Vallee noted in Messengers (and echoed in later writings), the persistence of belief, particularly in things for which little or no evidence exists, seems to be a hallmark of the UFO community even today. It was for this assessment, in part, along with a similar skeptical treatment of the UFO subject in relation to its long-supposed "extraterrestrial" nature, that evoked boos from attendees when Vallee first addressed it publicly.

Not surprisingly, even today the discussion of a "UFO" as being anything but alien visitors in their interstellar spacecraft is often met with confusion, or worse, simply derision. Whether hardened skeptics, in their arguments against alien visitation, or the UFO proponents, and promoters of their various forms of "faith" in the subject, are quick to defend their dogmatic positions that a "UFO", in general discussion, is taken to mean "alien"; when in fact, the very history of the acronym and its first use by the USAF (with its then-promising Project Bluebook) had been intended to lend ambiguity to the phenomenon in the absence of any conclusions.

So many decades later, we are yet to have many conclusive determinations about Unidentified Flying Objects. The skeptics still argue against aliens, which appear to be as truant from the situation as they were at any time; meanwhile those of the new UFO spiritualism remain ever-faithful in their new gods... "gods" that are as mysterious, invisible, and disconcertingly silent as any deity to have ruled over its fledglings below, carrying forth in timeless non-interference that borders on utter disregard.

One might argue that the majority of us who have taken interest in the UFO subject could have been deceived at one time or another, believer and skeptic alike. However, this sort of "deception" may not be an act of malice, so much as it it is a matter of "blind leading the blind." Belief is a powerful thing, after all, and once a mind has been primed for it, it can be difficult to unlearn the dogmatic attitudes that are built up over time. On the less extreme side of things, dogmatism may very well be the root underlying the apparent lack of progress we have seen regarding UFO research in the last several decades just as well; troubling though it is, this is the innocuous element, compared with what happens when dogmatic ideals are paired with radical (and irrational) belief.

"[What] I was addressing in Messengers of Deception is the social level," Vallee once told an interviewer. "The impact on our belief systems. At that level--and that level is very difficult to convey to the believers in UFOs, the believers in little green men from space--that at that level, it really doesn't matter whether UFOs are real or not. If enough people believe something is real, then it is real in its effects. In terms of a social reality, and in terms of how people act in relation to their beliefs. And that opens the question of... could the UFO phenomenon be manipulating us? Could it be a teaching system of some sort, perhaps something that we are creating ourself?"

Belief, as UFO writer John Keel and contemporary of Vallee once penned, is the enemy. At its best, one might differ, it can be useful, and perhaps even instructional. But at its worst, belief can be a dangerous thing, just as well.