The Curious Tale of the “Giant Guinea-Pigs”

Back in 1998, I interviewed a woman who had an unusual encounter near the Staffordshire, England village of Alrewas, located not far from where I was living at the time. It was the summer of 1992 when the encounter went down, and the woman - a resident of Brighton, England - was visiting friends in the area. On one particular morning, and while taking a stroll around the village, the woman was stopped in her tracks by the sight of what she recalled describing to her friends as "two fat guinea-pigs running up the road." Indeed, she told me, they were "giant" in size. In fact, such was their incredible size, she was unable to believe that such immense guinea-pigs could even exist.

It turns out that the animals were not guinea-pigs, after all. They were, in reality, coypus; which are hardly native to the UK, to say the least! Nevertheless, they do have a long and convoluted tie to the UK. The coypu (Myocastor coypus) is a significantly-sized rodent, and has its origins in South America. It has, however, been introduced into Asia, Africa, and the United States. But, what of the UK?

Coypus were brought to the UK - specifically East Anglia - from Argentina in 1929. It was their fur that counted. A decade or so later, numerous coypus escaped from the Carill-Worsley Farm, East Anglia, on what was the proverbial dark and stormy night. It practically ensured the near-inevitable establishment of a wild population of the creatures all across the region. Certainly, by 1961 it was estimated that coypus had turned around 40,000 acres of Essex, Suffolk, and Norfolk land into their very own stomping grounds. 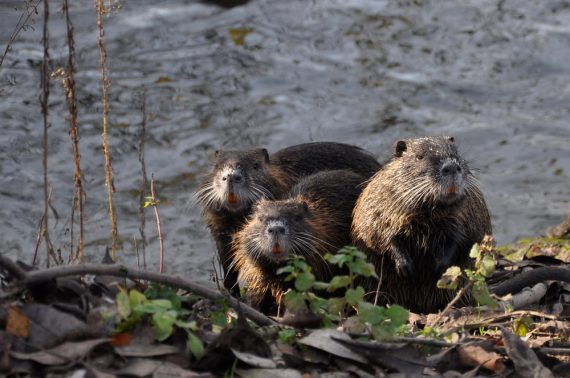 As a result of this "invasion of the coypus" the British Government found itself embroiled in the controversy. On December 21, 1965, the following exchange, extracted from Hansard, occurred: "Mr. Hazell asked the Minister of Agriculture, Fisheries and Food if he will make a statement about the coypu campaign which his Department has undertaken in East Anglia during the past three years."

The reply, from one Mr. Peart, was as follows: "The campaign which opened in August 1962, will end on the 31st of this month. The coypu or nutria is a South American aquatic rodent which was introduced into Great Britain about 1930 for fur farming purposes. As a result of escapes from farms coypus established themselves in Norfolk and Suffolk and spread to neighboring counties. It became clear that this animal was capable of causing serious damage to agricultural crops, especially sugar beet and other roots, as well as undermining the banks of rivers and dykes. It was therefore decided to launch a special campaign to bring the coypu under control."

Peart continued: "Coypus have been systematically cleared by working inwards through Norfolk and North Suffolk through the heart of the infestation in the Norfolk Broads. In the more inaccessible areas of the Broads themselves, total eradication is not possible, but even there the coypu population has been reduced to manageable limits. As a result of this campaign, farmers and other occupiers should now be able to deal with the pest as is their responsibility. My Department will advise if individual occupiers need help and rabbit clearance societies will continue to receive grant for work against the coypu. The Joint Parliamentary Secretary will attend a meeting in Norwich on 6th January, 1966 to outline plans for ensuring that the pest does not reestablish itself, and he will convey my thanks to the many organizations which have contributed to the success of the campaign."

As for the situation today, the British Government maintains that the coypu presence was eradicated in 1989. The Alrewas saga, however, suggests otherwise. And, it's far from being alone. A likely encounter occurred in 2012. Then, we have this, from 2015.

And, in September 2014, one of the UK's most well-respected seekers of strange creatures - Dr. Karl Shuker - had an encounter with what he believes to have been a coypu. You can find Karl's account right here. As Karl noted: "Checking out images of the coypu online, there is little doubt that this species resembles my mystery beast more closely than anything else that I know of."

Karl also noted that "...after doing some more research concerning the area where I saw the creature, I discovered that it contains not only fields, open spaces, and even a small nature reserve (the Lime Pits Nature Reserve), but also some very large pools and the Rushall Canal. If the creature is indeed a coypu, such a location as this offers a very compatible habitat for its continued survival."

In all probability, the coypu did not become extinct in 1989. In other words, those "giant guinea-pigs" are still with us!

A “Strange Animal” In The UK