The Future of Beauty Pageants is Robot Judges

Metallic swimsuit? Check. Evening gown with GPS? Check. Ventriloquist dummy that looks like BB-8? Check. It sounds like you’re ready to compete in the first ever international beauty pageant that will be judged solely by robots. Take that, Steve Harvey!

According to its press release, the Beauty.ai pageant is organized by the Youth Laboratories collective, a team of biogerontologists and data scientists who believe that:

… in the near future machines will be able to get a lot of vital medical information about people's health by just processing their photos, to develop a set of algorithms that can accurately evaluate the criteria linked to perception of human beauty and health where it is most important – the human face. 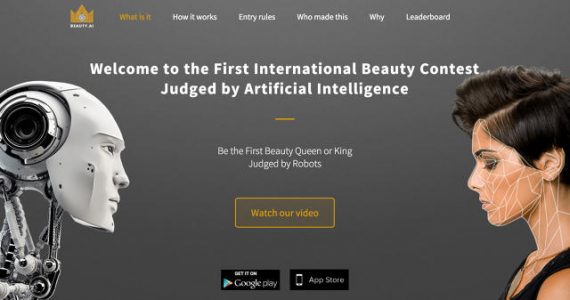 Using the Beauty.ai app, contestants submit selfies to the three robot judges who will evaluate “symmetry, skin color, wrinkles and many other beauty, youthfulness and health parameters.” Then they’ll compare the contestants within their race, age group and sex. That’s right – guys can enter too.

To bring together some of the most advanced humans - those who are interested in robot opinion and those developers, who are building intelligent systems to understand the beauty function.

Wait a minute … doesn’t that sound like they're building a dating service for programmers?

Do you feel your intelligence is superior to your looks? Then enter the separate pageant for AI developers and submit a similar algorithm for judging human appearance. The prize includes the chance to work with anti-aging and skin care companies that are partners with Beauty.ai.

Beauty.ai’s altruistic claim is that the software used and developed will eventually help people evaluate their appearance for signs of health issues and aging concerns.

What do you think? Is this robot-judged beauty pageant Miss Universe 2.0? An innovative way to detect skin problems? A creepy cover for testing facial recognition software? Something else?

Excuse me while go I comb my hair.

Builders on Mars Will Be Able to Use Martian Concrete