This year marks the fiftieth anniversary of one of my all-time favorite movies. So, I thought I would share with you my thoughts on it. And, in the process, maybe even create a few new converts! Made in 1966 by Hammer Film Productions, it's The Reptile. Mention Hammer to most people and they'll instantly think of the classic Dracula- and Frankenstein-themed movies starring Hammer legends Peter Cushing and Christopher Lee. However, there's no denying that Hammer released a number of great movies that specifically didn't feature their most famous stars. One of them being The Reptile.

Like so many Hammer movies, The Reptile is filled with mysterious characters, an old and atmospheric English locale, and disturbing and diabolical deaths. In terms of the latter, they are attributed to what seems to be a kind of plague. Or, as it's referred to in the movie, the dreaded "black death." It's not long at all, however, before we find out that the agonizing deaths are caused by something far stranger.

All of which brings us to a certain abode called Well House. This Baskerville Hall-style abode is home to a Dr. Franklyn, played by Noel Willman, who appeared in Hammer's 1963 production, The Kiss of the Vampire. Also living there is Franklyn's daughter, the somewhat enigmatic Anna (played by Jacqueline Pearce, and perhaps best known for her role as Servalan in the BBC's sci-fi series, Blake's 7, which ran from 1978 to 1981). And then there's Dr. Franklyn's odd servant/butler (actor Marne Maitland, who appeared in a 1962 Hammer movie, The Phantom of the Opera). Combined, they make for a creepy trio - a trio sitting on some terrible, dark secret.

When Harry and Valerie Spalding arrive on the scene (actors Ray Barrett and Jennifer Daniel), it quickly becomes obvious to them that something very strange and evil is afoot in the little village of Clagmoor Heath, Cornwall. That is made apparent when the pair is befriended by the landlord of the local pub, Tom Bailey. As an aside, Bailey is played by the late Michael Ripper, who appeared in more Hammer movies than any other actor. Tom reveals that the people of the village have been plunged into a collective state of fear - all as a result of the grisly deaths. 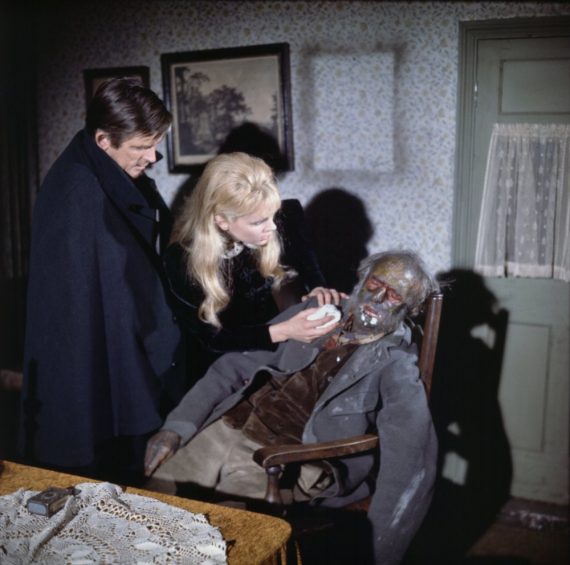 "Mad Peter" (actor John Laurie) is another character who the Spaldings cross path with. Not for long, however. The village eccentric soon meets a violent end - and to the absolute horror of Harry and Valerie. Indeed, something savage attacks Peter, the result of which is a rapid, nightmarish death. Harry decides to dig deeper into Mad Peter's death - as in literally. He embarks on a bit of grave-robbing and finds, to his horror and amazement, that Peter appears to have been killed by a snake. At least, that's what the wounds on Peter's neck strongly suggest.

When yet another body is examined - and is shown to exhibit identical wounds - none can deny that something very strange is going on. And it all leads back to Well House, which holds a shocking secret. Namely, that Anna is not what she appears to be. In case you haven't seen The Reptile, I won't give away the rest of the plot, but what I will say is that Clagmoor Heath has a monster in its midst; a deadly creature of shape-shifting proportions. And, like all Hammer movies, this one comes to its climax in deadly, bloody, and violent fashion. I wouldn't have it any other way!

NASA Now Has a Department of Doomsday Defense