The Yeti: What’s In A Name?

Many people have heard of the legendary Abominable Snowman or Yeti. It’s the equivalent of the United States’ famous Bigfoot - or Sasquatch, as it's all termed. But not so many, perhaps, know of the origins of the beastly man-monster of the snowy peaks. We're talking about a reportedly diabolical denizen of the huge Himalayas - a mountain range in Nepal, Tibet that is home to the 29,029-foot-high Mt. Everest. The Yeti is perceived, for all intents and purposes and depending on whom you care to ask, as a giant ape of an unclassified nature, or a surviving example of Gigantopithecus, a huge, gorilla-like animal long thought to be extinct. Others, of a far more skeptical mind, might very well say it’s merely a mixture of hoaxing, folklore, misidentification, and mythology.

Within Tibetan culture, there are tales of beliefs in, and knowledge of, a giant, Bigfoot-like creature existing there centuries ago. The Rongkup people of the area, for example, have ancient tales of a mighty creature of the glaciers, a large and lumbering ape-like animal that used stones as weapons, and whose blood was occasionally used in religious ceremonies. On similar territory, in 1832 the story surfaced of a mountaineer and naturalist named Brian Houghton Hodgson, a man who exhibited a deep interest in Buddhist teachings and beliefs. That same story told of how a number of Hodgson’s team encountered on the Himalayas a large, hairy animal that walked on two legs and which was concluded to be neither bear nor man. 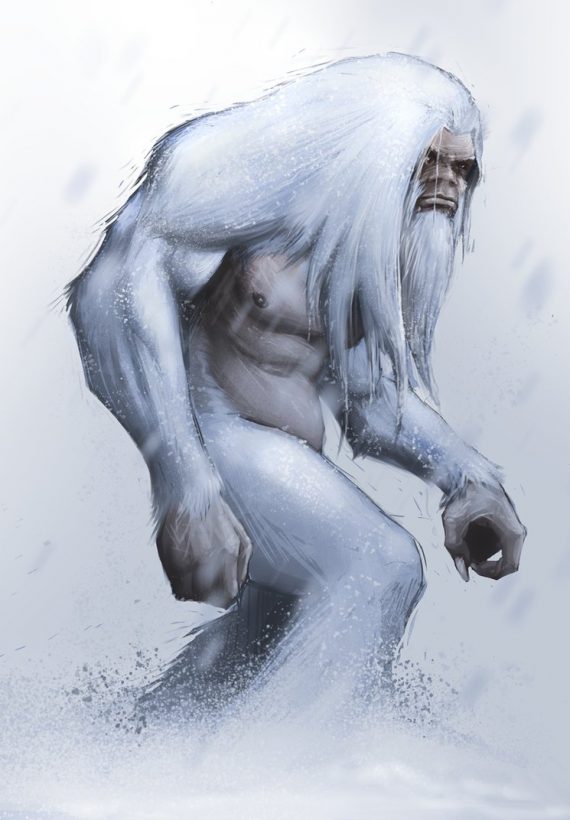 Hodgson, utterly baffled but admittedly fascinated too, could only theorize that the creature was possibly an orangutan, or at least something along those lines. Reports continued to surface, but it was not until 1921 that the title of "Abominable Snowman" came into being. In that year, a Lieutenant-Colonel Charles Howard-Bury – a British politician and a soldier with Britain’s King’s Royal Rifle Corps – led a team to the Himalayas called the Everest Reconnaissance Expedition. Its primary goal was to determine if the northern side of the massive mountain might allow for a degree of access to the peak.

While mapping out the treacherous mountain, Howard-Bury and his team came across a set of surprisingly large footprints, at an altitude in excess of 20,000-feet that appeared to resemble those of a bare-footed man, which was surely not what the group anticipated coming across at all. When a number of the local porters who had been hired to take part in Howard-Bury’s trek were later interviewed about their experiences – by a journalist named Henry Newman, who wrote for the Calcutta, India-based Statesman – and opened up regarding their knowledge of the legendary monster, Newman coined the term, "Abominable Snowman." He did so almost certainly incorrectly. The tribesmen described the beast as being "metoh" – meaning "filthy." Newman, however, mistranslated it as "abominable." And out of that error – or, as has also been suggested, a bit of imaginative, artistic license - the creature’s most famous name was let loose on a very soon to be captivated world.

In the 1950s, interest in the Yeti reached fever pitch point when a number of acclaimed mountain climbers, including Eric Shipton, Sir Edmund Hilary, and a team sponsored by Britain’s Daily Mail newspaper, photographed what appeared to be gargantuan footprints in the snowy and icy heights and collected sighting-reports of the wild man-thing said to be in their midst. Today, it must be admitted that while fascination for the Abominable Snowman is certainly nowhere near what it was decades ago, the hunt still goes steadily on. The beast, of course, remains elusive. As do most so-called cryptids.