In response to my recent article, "UFOs, JFK, and an Enigmatic Character," sixteen people contacted me to see what I thought about the allegations that President John F. Kennedy's assassination - on November 22, 1963, in Dallas, Texas - had a connection to the UFO issue. The reason being that the aforementioned article was focused on a man named Guy Banister. He was someone who investigated a number of UFO reports while working as a special-agent of the FBI in 1947. He was also someone who turns up in numerous books on the Kennedy assassination. Usually, from a sinister and conspiratorial perspective.

It's fair to say that within the field of Ufology, there are more than a few people who believe - or suspect - that JFK was whacked to prevent him from blowing the lid on his knowledge of the UFO phenomenon. I've written about aspects of this highly controversial issue before, and it's worth noting just how many connections there are between UFOs and the killing of JFK. Or, to be absolutely correct, the assumed connections. Ufology is, at times, very good at putting pieces of a ufological puzzle together. On other occasions, however, the field is guilty of leaping to conclusions based on nothing but assumption and by playing the extraterrestrial equivalent of "Six Degrees of Kevin Bacon."

Ufologists rarely agree on everything, so why should the community be united on this issue? The answer is simple: the community isn't united on this issue. For some, it's the ultimate conspiracy, one which involves Roswell, Area 51, the White House, mysterious gunmen, and the death of a president. For others, it's complete and utter garbage. So, with that said, I'm going to share with you the "JFK & UFOs" information. Or, at least, a small portion of it. Conspiracy or "six degrees"? Here we go... 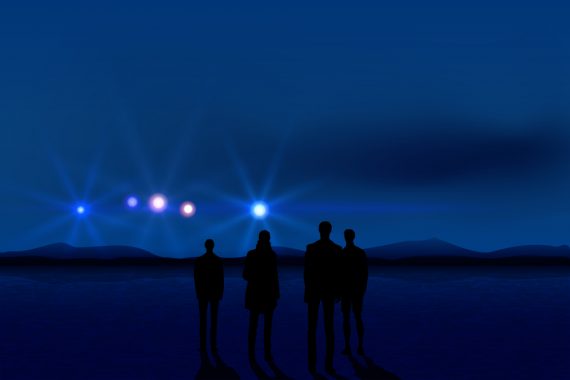 I mentioned that FBI special-agent Guy Banister investigated a body of UFO reports for J. Edgar Hoover in the summer months of 1947. Then, in the early 1960s, we see him fingered as a central player in the Kennedy killing. It turns out that another individual had ties to 1947-era Ufology and the death of JFK. That man was Fred Crisman, one of the key figures in the notorious UFO saga of Maury Island, Puget Sound, Washington State. It's a bizarre story which pre-dates, by a few days, Kenneth Arnold's famous flying saucer encounter of June 24, 1947. It's a case which involves the deaths of two members of the military - Lt. Frank Brown and Capt. William Davidson - and threats from a Man in Black-type character. Then there are claims of secret surveillance of the central players in the odd story. On the other hand, many within Ufology believe the whole thing was nothing but a tragic hoax.

As for Crisman, author Kenn Thomas tells us: "In 1968, New Orleans district attorney Jim Garrison subpoenaed Fred Crisman as part of his investigation into the JFK assassination, which became the subject of Oliver Stone’s 1992 JFK movie. Garrison believed that Crisman was the infamous grassy knoll shooter. And he’s the central figure in the 'Mystery Tramp' photo of the Dallas rail yard hobos."

It turns out that Garrison - played in the movie, JFK, by Kevin Costner - knew Guy Banister years before the Kennedy assassination. Specifically in the 1940s. Garrison said, in his book, On the Trail of the Assassins: "When he was in the police department, we had lunch together now and then, swapping colorful stories about our earlier careers in the FBI. A ruddy-faced man with blue eyes which stared right at you, he dressed immaculately and always wore a small rosebud in his lapel."

While there is a great deal of dispute about who shot JFK, there's no doubt about who killed Lee Harvey Oswald. It was Dallas strip-club-owner and Mob-buddy, Jack Ruby. Journalist Dorothy Kilgallen was deeply interested in the circumstances surrounding the JFK affair, and particularly so Ruby's links - to the extent that she managed to secure an interview with him. Back in 1955, the following words of Kilgallen appeared in the pages of the Los Angeles Examiner: "British scientists and airmen, after examining the wreckage of one mysterious flying ship, are convinced these strange aerial objects are not optical illusions or Soviet inventions, but are flying saucers which originate on another planet." Kilgallen claimed her information came from a British official of Cabinet rank.

Some suggest Kilgallen's death on November 8, 1965 was not the result of an accidental overdose of booze and pills. They see a far more sinister explanation. And the list goes on. The late conspiracy theorist Bill Cooper made the wild and crazy claim that one of the Secret Service agents present in Dealey Plaza when Kennedy was killed - a man named William Greer - was responsible for the president's death. And how was death achieved? Via nothing less than a weapon employing extraterrestrial technology! Am I allowed to say "bullshit" here? I certainly hope so, because that's exactly what it is.

One day before his death, JFK spoke at the dedication ceremony of the Aerospace Medical Health Center at Brooks Air Force Base, San Antonio, Texas. The base had been chosen to conduct groundbreaking work in the field of space-medicine; figuring out how to keep astronauts free from deadly radiation, learning more about how gravity-free environments can affect the human body, and so on. While at Brooks, Kennedy met with personnel from Wright-Patterson Air Force Base, Ohio (the alleged home of the legendary "Hangar 18"). JFK also met with staff from Fort Detrick, Maryland. For years, rumors have circulated to the effect that Fort Detrick has been the home of classified research into "alien viruses."

Still on the matter of Roswell, in 1997 one of the most controversial of all UFO books - ever - was published. Its title: The Day After Roswell. Penned by Bill Birnes (of UFO Hunters and UFO Magazine) and the late Lt. Col. Philip Corso, it told of Corso's alleged knowledge of alien technology, artifacts and bodies in the hands of the U.S. military. At the time of his death in 1998, at the age of 83, Corso was planning another book: The Day After Dallas. No prizes for guessing the subject-matter.

Moving on, back in the 1950s, U.S. Senator Richard Russell paid a visit to the Soviet Union. At the time, Russell was the Chairman of the Armed Services Committee. The date was October 4, 1955. Russell had a profound UFO encounter - which revolved around a pair of UFOs - while the train he was on was negotiating Russia's Trans-Caucasus area. Both the CIA and the Air Force took serious notice of what Russell had to say. Official records on the matter state that Russell "saw the first flying disc ascend and pass over the train."

We're also told: "One disc ascended almost vertically, at a relatively slow speed, with its outer surface revolving slowly to the right, to an altitude of about 6000 feet, where its speed then increased sharply as it headed north. The second flying disc was seen performing the same actions about one minute later. The take-off area was about 1-2 miles south of the rail line...all three saw the second disc and all agreed that they saw the same round, disc-shaped craft as the first."

Senator Richard Russell was a member of the "Warren Commission" (actually, the President's Commission on the Assassination of President Kennedy) that sought to find answers to who killed JFK. For the commission, it was Oswald. And there's more to come on Oswald: in October 1962, he began working for a Texas company by the name of Jaggars-Chiles-Stovall. In his book, Conspiracy, Anthony Summers wrote that JCS's work "...involved material obtained by the very U-2 planes Oswald had once watched in Japan, and only employees with a special security clearance were supposed to see it."

In 2013, the BBC noted: "The U-2 was one of the Cold War’s most infamous aircraft, a plane designed to fly over unfriendly territory too high for enemy fighters or missiles, and take pictures of unparalleled detail - and, as it has just been revealed, helped spur the development of the secret Area 51 airbase."

Oswald, the U-2, Jaggars-Chiles-Stovall, and Area 51: a connection or something akin to the "six degrees" issue? Again, personal opinion is very much the order of the day. I could go on and on, but you get the picture. Yes, a case can be made that links the Kennedy assassination to the UFO subject (very often, however, a tenuous link). But, in light of the "six degrees" phenomenon, should a case be made?

It Was Math That Killed The Conspiracy Theory