“Belgium and the UFO Issue”

Officially, the U.S. Government got out of the UFO issue in 1969 when the Air Force's Project Blue Book closed its doors. Of course, that doesn't mean that agencies have not taken an interest in UFOs post-1969. They certainly have. A perfect example is the so-called "Flying Triangle" phenomenon. It took off in the early-to-mid 1980s and reached its peak in the following decade. Although, a careful study of the history of Ufology demonstrates that the large, black, triangular-shaped UFOs have, in fact, been reported since the 1940s - although, admittedly, not on the scale they were reported in the eighties and the nineties.

One of the more interesting documents that demonstrates post-1969 interest in the UFO puzzle focuses on those strange Flying Triangles - specifically over Belgium in the 1989-1990 time-frame. It originates with the U.S. Department of Defense and is titled "Belgium and the UFO Issue." Circulated widely among the U.S. Intelligence community, it reveals the following: "Numerous UFO sightings have been made in Belgium since Nov 89. The credibility of some individuals making the reports is good...Investigation by BAF [Belgian Air Force] continues."

Then, the document digs into the matter of witness reports. We're told that...

"Source A cites Mr. Leon Brenig,a 43-year-old professor at the Free University of Brussels in the field of statistics and physics...Mr. Brenig was driving on the Ardennes autoroute in the Beaufays region east of Liege, Sunday, 18 March 1990 at 2030 hours when he observed an airborne object approaching in his direction from the North. It was in the form of a triangle...and had a yellow light surrounding it with a reddish center varying in intensity. Altitude appeared to be 500-1000 meters, moving at a slow speed with no sound. It did not move or behave like an aircraft."

"Source B," the document reveals, "...discusses a Belgian television interview with Colonel Wil De Brouwer, Chief of Operations for the BAF...De Brouwer noted the large number of reported sightings, particularly in NOV 89 in the Liege area and that the BAF and MOD [Ministry of Defense] are taking the issue seriously. BAF experts have not been able to explain the phenomena either."

Moving on, we have the following: "De Brouwer specifically addressed the possibility of the objects being USAF B-2 or F-117 Stealth aircraft which would not appear on Belgian radar, but might be sighted visually if they were operating at low altitude in the Ardennes area. He made it quite clear that no USAF overflight requests had ever been received for this type of mission and that the alleged observations did not correspond in any way to the observable characteristics of either U.S. aircraft."

We're then provided with the story of a very credible source: "[Deleted] related a similar UFO sighting which apparently happened to a Belgian Air Force officer in the same area near Liege during November 89. The officer and his wife were allegedly blinded by a huge bright object as they were driving on the autoroute. They stopped their car, but were so frightened they abandoned the vehicle and ran into the woods...The BAF is concerned to a point about the UFO issue and is taking action to investigate information they have...The USAF did confirm to the BAF and Belgian MOD that no USAF Stealth aircraft were operating in the Ardennes area during the periods in question."

There ends the document. But, not the interest in the Flying Triangles over Belgium. Following a wave of similar FT encounters in the U.K. in March 1993, Nick Pope - who, between 1991 and 1994, handled UFO reports for the British Ministry of Defense - approached the Belgian military to get its views on the Flying Triangle phenomenon (there is, however, a down to earth explanation for the UK sightings). In a January 1997 interview, Pope told me:

"I approached the Belgians to get a comparison after their sightings. I phoned the Air Attaché at the British Embassy in Brussels and he spoke to one of the F-16 pilots who had been scrambled to intercept a Flying Triangle over Belgium back in 1990. Well, the Air Attaché reported back to me that the corporate view of the Belgian Defense Staff was that they did believe that they were dealing with a solid, structured craft. Apparently, the word from the Belgians was: 'Thank God it was friendly.' If it hadn’t been, it was made clear to me that there was very little that the Belgian Air Force could have done anyway - despite the fact that the F-16 is no slouch.”

Pope also approached the U.S. Department of Defense to discuss the Flying Triangle phenomenon. Pope outlined the nature of the discussion: "We decided that we couldn't ignore the various rumors that were doing the rounds about a supposed Top Secret aircraft developed by the U.S. Government and called Aurora - or, indeed, any hypersonic and/or prototype aircraft operated by the Americans. There had been persistent rumors in the aviation world and among the UFO lobby that the SR71 Blackbird had been replaced by a hypersonic aircraft code-named Aurora and that that was what the Flying Triangles really were."

Pope continued: "I was well aware that there had been some interesting stories about visual and radar sightings around certain air bases; however, I hadn't put much store in these rumors – not least because there had been some very definitive denials from the Americans. I know there's a lot of cynicism about government and the military. And although officialdom may refuse to answer a question and may sometimes give a misleading answer, outright lying is incredibly rare. And when it does occur, if it's uncovered it almost certainly leads to resignation. 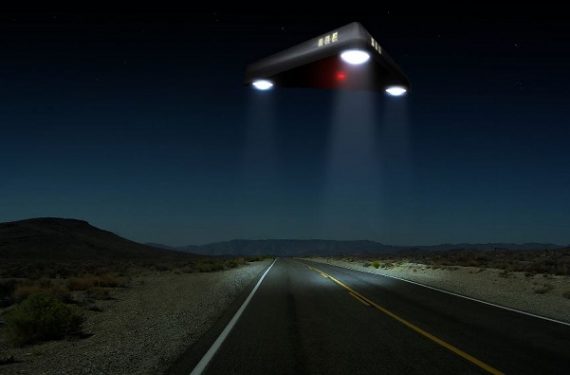 "But with the March 1993 sightings – and in spite of the denials from the Americans that they were responsible for the Flying Triangles – we did contact them to make inquiries. This was because they have the responsibility pertaining to the U.S. presence in Britain. Those inquiries bore absolutely no fruit at all. The Americans said: 'No. We can shed no light at all on the UFO sightings that have led to your inquiry.'"

Pope told me that the liaison with the Americans was not without its moment of intrigue: "If anything, there was an interesting little hint that the Americans, too, were seeing these Flying Triangles over their territory. As we were making our inquiries, they turned the question around and wanted to know if our Royal Air Force had a triangular-shaped, hyper-sonic prototype aircraft of some sort. So, presumably, the Americans were having Flying Triangle sightings, too."

Pope's final words on the matter are well worth keeping in mind: "But this was interesting, in light of the fact that the Americans supposedly got out of UFO investigations back in 1969 when the Air Force's Project Blue Book closed down. Of course, you may not officially be in the UFO game, but you are certainly going to be aware of – and take an interest in – reports of structured craft in your airspace."

Oregano May Reduce the Methane in Cow Burps