"Every picture tells a story", as the old saying goes (and yes, as Rod Stewart sang in 1971). This is especially the case when it comes to alleged photographs of unidentified flying objects, where more often than not, the pictures leave much to be desired.

However, in some cases, despite a lack of clear details of the purported craft in question, visual elements in some UFO photos still may help researchers by providing clues about the behavior of the objects they claim to document. Such was the case with a particularly unusual photo shared with me recently, taken on September 23, 1967, which appeared in one of the classic Aerial Phenomena Research Organization (APRO) Bulletin, provided to members of the group for a number of years by the husband-wife team of Jim and Coral Lorenzen.

The photograph came to my attention under rather unusual circumstances. I had been reviewing a number of the old APRO Bulletins, which have been made available online by the folks at OpenMinds here, having been obtained with the private collection of UFO researcher Lt. Colonel (USAF Ret.) Wendelle C. Stevens. Having shared them with a colleague, he recalled having seen "one image in a bulletin that I always thought the neatest and most thought provoking UFO picture I had ever seen (and still do)." Upon receiving the OpenMinds link to the old Bulletins, my friend had recalled the photo from a number of years back, but was unable to recall the date of the Bulletin in which it appeared.

"So, I just randomly hit on one bulletin from the list at Openminds," he wrote to me quickly afterward in an email. "Guess what? The one I selected and opened in PDF looked familiar. Damn if it wasn't the EXACT bulletin!!!"

Quite a synchronicity, indeed. I was thrilled that my own honest dispatch of a quick link via email helped my friend recover a long-lost UFO photo of certain interest, but became even more fascinated at the prospect of being able to see if for myself. Scrolling through the short few pages of the newsletter, which dated from March/April 1973, I was able to locate the image quickly, which depicted the alleged "liftoff" of an object at high-speed, as it shot into the skies above Sedona, Arizona, in September 1967. 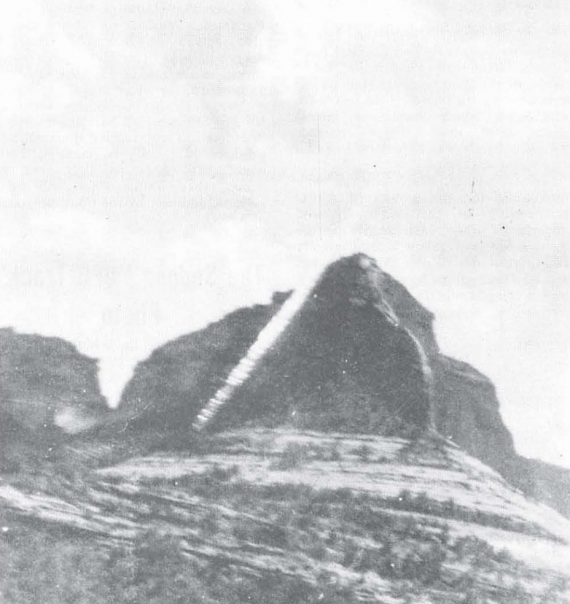 As mentioned previously of even the "best" UFO photos to have appeared over the years, this one certainly leaves quite a bit to the imagination. However, the analysis of the photograph, described in detail within the APRO Bulletin's accompanying article, is what makes it interesting.

First, a bit of background. Mr. C. Dwight Ghormley, a retired schoolteacher from Texas, had been visiting his sister in Flagstaff, Arizona, and decided to drive down to Sedona. Just a mile outside Sedona, Ghormley observed a large, silvery object which he had believed was a commercial carrier tank, a little less than a mile from the road. The location of the object seemed inaccessible, and Ghormley, having his Kodak Holiday camera handy, decided to stop and photograph the “tank”. Just as the shutter snapped, he looked back to see that the object was gone, and only a cloud of smoke or dust remained where it had been.

Ghormley nearly forgot the entire incident, having thought he may have been “seeing things”, and thought little of the strange object until some time later, when he had the film developed. The photograph he took seemingly captured the object as it took off into the sky, leaving a long “track” indicating its directional path.

The APRO had certainly been impressed with Mr. Ghormley, whose story indicated he had maintained no interest in the subject of UFOs prior to the experience. However, the photo itself had been heralded by the Lorenzens at the time as “one of the big breakthroughs in UFO research.”

An analysis of the photo was carried out by Dr. James A. Harder, an expert in photography and APRO’s consultant in Civil Engineering at the time (Harder would also go on to become involved in APRO's investigations of the 1973 Pascagoula abduction incident, involving coworkers Charles Hickson and Calvin Parker, as well as the 1975 Travis Walton abduction case). Of the "Sedona UFO Track" photo, Harder noted that, “From the standpoint of ‘proving’ the existence of UFOs [the photo] might be considered a flop, insofar as no details are seen — there is only what appears to be a sequence of spots. But from the standpoint of understanding more about UFOs it may be one of the most valuable photographs ever taken. For from it, and the data provided by the camera it was taken with, we can infer speeds, accelerations, and find even greater puzzles than we dreamed of a few short years ago.”

Without getting too heavily into the minutiae of Harder’s analysis here (more of which can be read in the bulletin), careful calculations based on the shutter speed and focal length of the Kodak camera Mr. Ghormley had used to capture the image led Harder to the following determinations: “At a distance of 4,000 feet from the camera, this represents a transverse distance of 700 feet traversed in approximately 29 ms. The calculated speed is thus on the order of 24,000 feet per second, or 16,000 miles per hour.”

Harder further noted that the estimated speeds of the object, while fast indeed, were nonetheless within the range of speeds which radar systems can detect, referring in his notes to the 1956 Lakenheath, England radar visual UFO case, collected by Project Blue Book. However, one curious feature about the photograph involved the multiple distinct impressions of the object in its direction of motion, rather than a simple line or “smear”. This, according to Harding’s preliminary examination, suggested one of two possibilities: that the craft in the photo had been producing a blinking or flashing illumination as it moved, or that the object was rapidly accelerating and stopping intermittently to complete its course of travel. “This is fast enough,” Harding surmised, “together with the inferred stop-and-go-character of the motion, to raise very basic questions about the mode of propulsion of these UFOs.”

(Note: I would submit that a third potential exists, pertaining to the object's movement indicated on film: might the effect of the "blinking" have resulted from a spinning object, which, as it rotated gyroscopically, reflected -- rather than emitting -- light off of a highly reflective surface at various intervals as it moved?)

The questions regarding the object's locomotion raised numerous unique questions  about the mode of operation that some UFOs may utilize. Thus, the unusual, distorted appearance of the object's flight path in the photo further lent itself, in Harder's mind, to the photo's (and Mr. Ghormley's) credibility.

As a concluding observation, Harder would develop a number of different theories about the underlying mechanisms of UFO craft, based on their behavior indicated in such studies. In 1968, Harder gave a Congressional testimony on the subject, in which he speculated that magnesium, purified of any innate crystalline defects, would be an ideal metal for the construction of a craft similar to those cited in flying saucer reports (he based this on his study of samples of magnesium recovered in Brazil in 1957, purportedly discharged from a UFO that exploded in midair). Harder also studied the UFO observation of chemist Wells A. Webb, who described observing a UFO through polaroid glasses which revealed three dark circular formations that appeared in concentric fashion around the object. Harder guessed that the concentric "rings" Webb observed were evidence of the Faraday effect, which is demonstrated in the video below:

Harder guessed that these elements were evidence of a strong magnetic field produced by the object, which further suggested a gravito-magnetic effect underlying the craft's mode of propulsion. This notion is similar, in certain regards, to an aircraft envisioned by Nikola Tesla, which he mentioned at various times throughout his life. Whether Tesla's visions of such an aircraft were ever formalized remains unclear; at the time of Tesla's death, assistant director of the FBI's New York office, P. E. Foxworth, was dispatched to his room at the New Yorker Hotel to examine possessions and documents believed to be of vital importance to the U.S. military. It was, after all, 1943, and the Allies were in the heat of conflict against the Axis powers; within two days of Tesla's passing, representatives of the Office of Alien Property went to his room, where all of his possessions were seized.

The notion that Tesla's ideas could be somehow related to the UFO mystery has been brought up often over the years, although this concept -- and its possible implications -- are outside the scope of the present discussion. The question should be offered here, however, as to whether study of the UFO phenomenon, and specific instances of UFO observation such as the "Sedona Track" photo, may yield data about the operation of UFO craft that is paralleled in other literature, or evidential of characteristics that can be confirmed in the various branches of science. If so, the nature and possible mechanism of some alleged "UFOs" may indeed eventually become attainable, rather than simply remaining "mysterious" fodder for the inquisitive among us.

Eyes Only: How the CIA Kept Tabs on a Civilian UFO Research Group 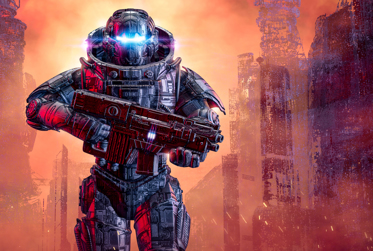 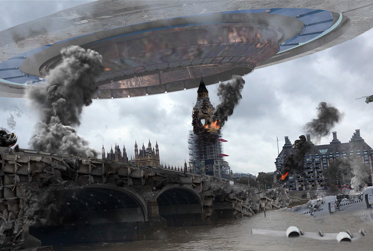