New Data on the Asteroid That Killed the Dinosaurs

We know that the 6-mile-wide asteroid that hit the Earth over 65 million years ago at Mexico’s Yucatan Peninsula killed the large dinosaurs and immediately changed history from the Cretaceous Period to the Paleogene Period. However, geologists could not tell what impact the impact had at its ground zero – the Gulf of Mexico – because the data found from deep drilling and seismic tests there was fiercely protected by the oil industry. Until now.

The story of this important historical data, as told in a new paper in the Journal of Geophysical Research: Solid Earth, begins in 1991 when David Kring of the Lunar and Planetary Institute in Houston discovered and named the Chicxulub impact site. Kring knew that there were massive amounts of drilling data around the impact site because the Gulf of Mexico is covered with oil rigs. However, the oil industry blocked all access to the data because … it’s business, baby.

Over 20 years later, researchers led by Jason Sanford, an exploration geologist for Chevron, were finally able to obtain data from 408 wells drilled 35,000 feet into the seafloor (50,000 feet below sea level) and seismic data from that area. From this, they were able to recreate what happened in the Gulf of Mexico after that massive impact.

The drilling data showed that 48,000 cubic miles of sediment buried the area from the Yucatán to the Caribbean in hundreds of feet of debris in just a matter of days, completely changing the layout of the floor of the Gulf. At the point of impact, the researchers found hundreds of feet of sand, gravel and boulders that were drawn to the site by landslides, tsunamis, falling debris and earthquakes from as far away as Texas and Florida. 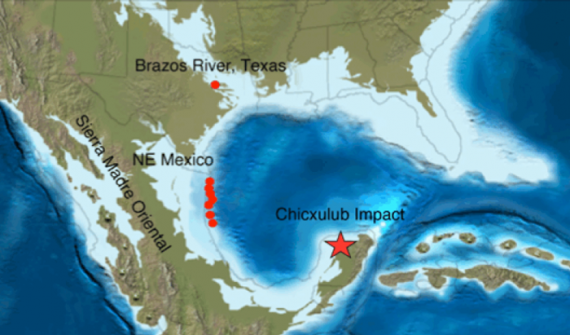 Analysis of the data helped the team determine that the energy released upon impact was equivalent to one hundred terratons of TNT or a billion times more powerful than the first atomic bomb. The next largest similar flow of debris is the Nuuanu Landslide from the Koolau Volcano on the island of Oahu, which the Chicxulub sediment dwarfs by two orders of magnitude.

The greatest event in 65 million years has finally been quantified and no oil profits were hurt in the making of this study.

Your Smell Determines How Many Mosquitoes Bite You