Los Angeles is a strange, and maybe even eerie place in the early morning hours. The illuminated summits of distant mountains, rising so steeply off the flat surface of the lowland expanse, certainly might lead a visitor to mistake structures along the ridges for distant, hovering lights.

Despite this illusion, reports of alleged mystery aircraft, sometimes hypothesized to be secret DARPA projects involving "stealth blimp" programs, have been reported in the area since the 1980s. According to the website of the Federation of American Scientists (FAS), "A very intriguing aircraft was been reported in the late 1980s. Some observers claim to have witnessed a vast black flying wing, estimated at between 600 and 800 feet in width, passing silently over city streets in California. The craft moved so slowly one observer claimed that he could jog along with it. The aircraft reportedly executed bizarre maneuvers in which it stopped, rotated in place and hovered vertically, pointing its thin trailing edge toward the ground."

It was around 5:15 AM local time as I traveled into Los Angeles recently with my friend, Brian "G.G." Bresler, on our way to Hollywood for a stop at Mel's famous all-night diner, shortly after which I would be catching a morning flight back to Atlanta. As Brian drove us through the outskirts of the City of Angels, the looming nighttime funk of this early hour (and the few hours of sleep I had managed to claim the night before) had me feeling like I'd fallen into a scene from Blade Runner. But more importantly, in this land where strange, massive mystery-things reportedly come and go through the late-evening and early-morning sky, I felt like one of these mythical "blimps" -- or whatever you may wish to call them -- might appear at any moment.

Talking about this with Brian as we stopped for orange juice and a few gallons of fuel at a gas station on our way into town, my driver decided to chime in on the subject, saying, "well my friend, I have a blimp story for you."

Brian's tale went like this: a number of years ago, he had been standing on the balcony of his apartment where he lived in LA at the time. It was nighttime, and he was smoking, and looking at the sky as he often did at night. On most occasions, others would be out on their balconies as well; Brian specifically recalled a yoga practitioner who performed various unusual contortions outside one of the adjacent apartments, amidst a number of others who frequented the view, even late at night. Tonight, however, Brian was all alone, standing and smoking as he looked up at the night sky.

"Very suddenly," he told me, "a large object appeared. This thing was obviously some kind of a blimp, although the way it appeared, and so suddenly, was almost as if someone had flipped a light switch. Boom, there it was, and this thing -- let me tell ya -- was huge."

Brian told me the dirigible, or whatever it might have been, certainly looked like a blimp, although far more massive than any he had seen previously. The craft appeared to be an off-white color, with a strip along the center that gave an impression such that windows might have existed there along the sides of the object. Then in three areas along the body of the massive thing, rings of bluish light were oriented vertically, which Brian told me had the appearance of looking "electrical". The blue rings of light flashed three times, almost as if strobing, before the object suddenly vanished again as quickly as it had appeared.

"I don't know what it was," Brian said, "but it was massive, and it was definitely there. Although it appeared, and then vanished again so quickly that I almost considered for a minute that it might have somehow been a projection or something, that someone had beamed up into the sky somehow."

I asked Brian what seeing this object had made him feel, to which he replied that he had felt a combination of great excitement, and sudden fear. "I shouted right out loud, did anybody else see that! But I had been the only one out on the balcony at that time, and the thing was there, and gone again, within just a few seconds.

The object Brian described certainly possessed unusual characteristics, even so far as alleged "UFO" reports may go. Namely, the enormous size of the "blimp", paired with its apparent concealment capabilities, don't match any known kind of aircraft operating in our skies, whether over Los Angeles, or anyplace else, for that matter. It did, however, bear certain resemblance to a report that was shared with me last year, which involved the observation of two large, silent aircraft with beacons oriented on the front, possibly something akin to reports of the United States Defense Department’s aims at creating “sophisticated, ultra-high altitude, 450-plus foot long blimps” used for high-altitude surveillance, as I discussed at my website around the time of the sighting. 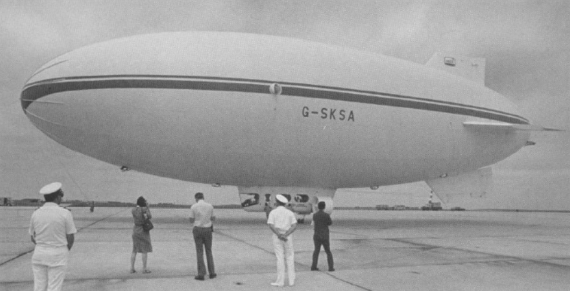 The pair of blimp-like objects were seen by a gentleman named Jason McCraw, who was accompanied by his girlfriend at the time of the observation. The two were standing together in a parking lot in the vicinity of Beaumont, California, at approximately 10:30 PM local time, on the evening of Monday, August 11, 2014. A report detailing what they saw was sent to me via email, and reads as follows:

“About one month ago, my girlfriend and I went on a late night donut run, (around 11:30pm), and witnessed something the likes of which neither of us had ever seen before. This was right on the main boulevard in our town, so when we exited the car in the parking lot, there were a fair amount of cars still driving around, just no other foot traffic as far as I could see.

We both were halfway through our cigarettes, so we decided to stand in the otherwise empty parking lot and finish them before going in. It was then that my girlfriend noticed two flashing white lights ascend from behind a range of hills approximately 70 miles to the south of where we stood. One was leading, and the other was following. In fact, it was pacing the first one so perfectly, it was as if it was attached to the first one by a tow rope.

The longer we watched as they straightened out and approached us, the stranger they looked. No sound, no wings, just gigantic blimp-shaped objects with one flashing white light at the “nose”.

They floated pretty fast, too fast and large to be blimps, and as they passed us directly overhead, you could make out their slightly off-white color in the flashing of the lights. They looked kind of worn. Older.

The strangest thing was that, as they continued to float past, one after the other released a single cluster of bright blue lights from their “tail” ends. No sound, definitely not blue ice. These lights were clustered and almost plasma-like in appearance. They were ejected directly over the center of town. They only stayed lit for a second before disappearing mid-air in the blink of an eye.

The objects then continued on their straight line until they were out of sight behind a low mountain range to the south.”

Incidentally, the same night that Jason and his girlfriend observed this peculiar, and obviously very large airship, an object described as "a grayish circle object in the distance moving at a high rate of speed across the night" was witnessed by a small group of individuals traveling together by car, approximately 1.5 hours away near Palmdale, California. The report appeared at the website of the National UFO Reporting Center, maintained by Peter Davenport.

Initially, around the time that Jason's story had been sent along to me, another associate of mine had suggested that this object seen over Beaumont that night was reminiscent of the Raytheon company's soon-to-be-launched Joint Land Attack Cruise Missile Defense Elevated Netted Sensor System (JLENS), a large white blimp designed for use by the US Army, which was scheduled for deployment the following year. However, tests involving various systems related to the JLENS program occurred throughout 2013, as well as a series of lab tests pertaining to JLENS radar data in October, 2014; it remains unclear wether any test launches coinciding with Jason's report above would have been underway in California two months earlier in August of that year. 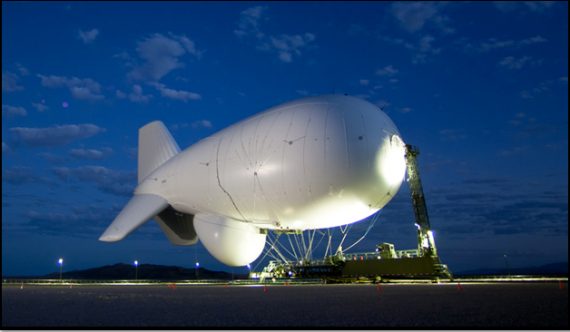 The actual program would take a bit longer to get off the ground, and during the JLENS' maiden operational tests on October 28, 2015, one of the tethered aerostats -- and all hell -- literally broke loose, bringing the program crashing back to Earth.

Defense News reported on the fiasco at the time of the incident:

One of the two aerostats that make up the Joint Land Attack Cruise Missile Defense Elevated Netted Sensor System (JLENS) broke free Oct. 28 from its mooring station near Baltimore and took a three-hour jaunt through the skies of Pennsylvania, finally landing in a wooded area in the northeast portion of the state.

The aerostat's tail broke off its body about a quarter mile from the blimp body's final resting place in a wooded glen, according to Capt. Matt Villa, the JLENS plans and coordination officer for the 263rd Army Air and Missile Defense Command, who was on the ground at the scene.

With the aforementioned in mind, the JLENS program, having taken longer than expected to get the point of being operational, and then undergoing the unfortunate set of circumstances we saw in October, appears to be increasingly less likely to be the explanation for the strange "mystery blimps" people have reported seeing over California.

Is there any other aircraft known to the public that might account for such observations, or are the reports of large (or even what might qualify for being massive) blimps over the West Coast indeed representative of some technology the majority of us remain unaware of at the present time? As always, readers are welcomed to contact me with their own recollections and observations of such things in the sky via email, or in the comments section below.

Pollen Can Improve the Performance of Lithium Batteries