The Art of Denial: The Secret Lives of Those Who Smear Saucers

Over the last several decades of research into so-called "UFOs", many individuals -- believers and skeptics alike -- have led seemingly "double lives."

This became particularly apparent to me over the course of a recent weekend outing, as I was riding up through the mountains of California with Stanton Friedman, nuclear physicist and UFO researcher who became the first among civilians to start looking into the decidedly sordid affair known as the Roswell UFO incident. We had been picked up by our friend Tracy at the Los Angeles Airport, and were making our way up to Big Bear Lake, California, for a weekend event we were both attending.

I hadn't personally seen Stanton since 2013, when he and I were each giving lectures at the International UFO Congress in Fountain Hills, Arizona. The event concluded with a panel discussion that featured Stan and I, along with our colleague Richard Dolan (former British MOD researcher Nick Pope also chimed in for a portion of the discussion, from his seat in the front row of the audience). Needless to say, I was eager to have a few hours of candid discussion with Stan as we made our way up into the mountains of Southern California; along the way, we decided to stop, at Tracy's recommendation, and grab lunch together at an outdoor sandwich shop in Riverside.

"Micah, I'm a skeptic!" Stanton proclaimed at one point, as the three of us enjoyed coffee and a slice of banana cream pie. I'll admit, this is indeed an unusual thing to hear one of the most vocal proponents of the extraterrestrial hypothesis say, especially as it relates to UFOs seen over the last few decades. "You're a skeptic too," he continued. "We're people who require facts, whereas a debunker will tell you, 'don't bother me with the facts, my mind is made up!' "

Stanton is somewhat famous for this catchphrase, and in truth, while I may not dive entirely down the proverbial rabbit hole that comprises the majority of UFO-related views in the 21st century, I agree wholeheartedly with Stanton; skeptical thought today, as well as the ideologies of the believers or advocates of various fringe claims, have become polarized to the point that many do make up their minds before coming into contact with any evidence that might change their views on things.

On that subject, I've never thought that the famous "Majestic 12" documents were among the data that had been capable of holding water in the broader mythos surrounding UFOs. Too many arguments against their authenticity exist to be able to justify their presence as a valid, reliable source of information, at least in their totality. Hence, when this subject came up during our lunchtime discourse, I was sure to ask Stanton about it directly, rather than to merely rely on second-hand information from books and older interviews.

"Obviously," Stan told me, "a large amount of the Majestic 12 information is fabricated." Once again, I was surprised by Stan's admission here, since generally what one will find in articles on the subject would have you believing that Stanton buys the entire thing, hook, line, and sinker.

Take, for example, this excerpt from the Wikipedia entry on "Majestic 12":

"Ufologists Linda Moulton Howe and Stanton T. Friedman believe the MJ12 Documents are authentic. Friedman examined the documents and has argued that the United States government has conspired to cover up knowledge of a crashed extraterrestrial spacecraft."

The statement above doesn't appear to mince any words in stating that Friedman (and Howe) "believe the MJ12 Documents are authentic." Which brings us back to some of the points Stanton made during our lunch rendezvous in Riverside. As he continued, he further expressed an essential point that I've often wondered over the years: that there may still be some truth to be gleaned from the MJ12 affair, even if the documents were a hoax. 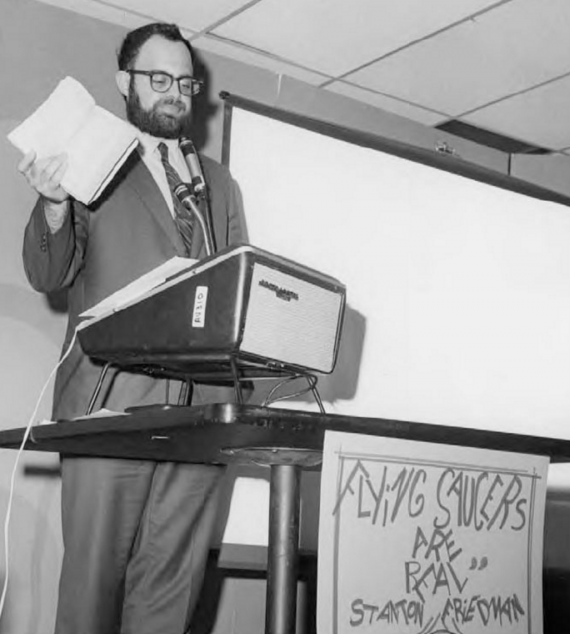 "The best way to muddy the waters," Stan said, "is to toss in some legitimate information, along with whatever bunk you're trying to peddle. No, you can't believe everything in the MJ12 Documents, but I maintain that there's a grain of truth, and maybe even some useful information to be found within."

A good example of this kind of "truth" is illustrated in Friedman's book Top Secret/ Majic: Operation Majestic-12 and the United States Government's UFO Cover-Up. In the book's second chapter, Friedman attempts to break down the curious inclusion of Dr. Donald H. Menzel among the alleged members of the secret "Majestic 12" group, overseen by Vannevar Bush, as described in the initial microfilm documents pertaining to the affair that arrived on the doorstep of filmmaker Jaime Shandera in December of 1984.

Admittedly, this would seem strange, since Donald Menzel had been one of the very most vocal opponents of UFOs throughout his years working as an astronomer and astrophysicist, whose notable achievements included discoveries relating to the Martian atmosphere and material nature of stars and nebulae. In addition to Menzel being outspoken in his views against UFOs, he also seemingly would have been a poor match amidst the other officials that appear on the primary MJ12 documents, who would have possessed government clearances.

This is where the first of the plausible "new" data came to light from Friedman's study of the documents, since he felt that Menzel's appearance on the list would have been intentionally added for purpose of confusion; hence, it seemed likely that this would be the first hint that the papers were indeed fakes. However, digging more deeply into Menzel's background, Friedman found that a 1951 letter to Vannevar Bush from Robert Proctor of the Boston law firm Choate, Hall, and Stewart, made mention of an assessment of Menzel's possible removal from Air Force security clearance (of which he was absolved, according to the memorandum). Friedman further noted that, unlike similar high-profile "loyalty hearings" that were big items in the news back in those tender days of the great communist scare, Menzel's hearing described in the memo saw no such media attention.

Another fascinating clue turned up in the Harvard archives, where a string of correspondences existed between Menzel and John F. Kennedy. This one is of particular interest, since Kennedy, at the time, had been on the Board of Overseers at Harvard, where members of the board had to select a special area of interest. Kennedy's "area" had been astronomy (a point of interest which may indeed warrant further discussion, but at a later time). Throughout the Kennedy/Menzel dialogues, mention is made of Menzel's security clearances, most notably a statement made to Kennedy in a memo on November 3, 1960, in which Menzel states:

"I have been a consultant to that activity with Top Secret clearance and have also had some association with the CIA. Obviously in an unclassified letter, I cannot go further into detail."

It couldn't be much more clear than that. As Friedman pointed out to me, and as evidenced by such statements as the one above, Menzel had indeed possessed the necessary security clearances for Top Secret work... a revelation which may never have come to light (unless noted elsewhere, apart from Ufology, such as in an eventual biography), had it not been for Friedman's curiosity regarding the MJ12 documents.

Now on to an interesting note: when one visits Menzel's Wikipedia page, nothing about this is mentioned, despite there being brief mention toward the end of the article about Menzel's public stances of skepticism toward the UFO subject. The "Talk" tab, on the other hand, allows one to see all the information under consideration for inclusion with the article, but which does not appear on the public front page... much of this material does deal with Menzel's alleged involvement with the MJ12 affair.

In other words, this sort of data isn't deemed suitable for inclusion with Menzel's official Wiki biography by Wikipedia's editors, despite the fact that, while the MJ12 connection may remain speculative, Menzel's security clearance, and thus his deeper involvement with government work, appears to be undeniable. With, or without having to go so far as to make the association with MJ12 "conspiracy theories", it's interesting that, just as Friedman notes in Top Secret/ Majic, few sources apart from Friedman's own discussion of Menzel detail to any degree his clearance for work with subjects of various levels of secrecy to the public.

While we're on the subject of Wikipedia, it is of equal interest to note that the Wiki page about Majestic 12 no longer features information that supports the view that there is at least some truth to the legends about MJ12. Such as, for instance, the following excerpt from an earlier revision of the Wiki entry, which talks about the infamous memorandum by Canadian radio operator Wilbert B. Smith, that discussed an organization in the U.S. that sounds eerily similar to the alleged MJ12 group:

In part, Smith wrote that his own "discreet inquiries" through the Canadian embassy in Washington D.C. had uncovered the fact that "flying saucers exist", "the matter is the most highly classified subject in the United States Government, rating higher even than the H-bomb", and that "concentrated effort is being made by a small group headed by Doctor Vannevar Bush" into their "modus operandi." Smith's memo was authenticated by the Canadian government.

This wasn't the only information supporting some aspects of the MJ12 situation that the older Wikipedia article included (one version of which can be read here). The point at this moment, however, is not to try and make a case for the existence of Majestic 12, but rather, to note the curious refusal to include data on sites like Wikipedia, which might suggest there is even a grain of truth to any of it.

Indeed, "don't bother me with the facts, my mind is already made up!"

It's an odd -- if not troubling -- state of affairs that, in the midst of discussion about secret clearances maintained by vocal opponents of the UFO subject, we see an apparent refusal to accept anything that might suggest some reality underlying official interest in the ongoing UFO melee. Maybe Majestic 12 did exist; maybe it really had nothing to do with UFOs at all... but based on the evidence, it does seem that there was, at very least, something going on.

As history shows -- at least for those interested in hearing an opposing viewpoint -- there have indeed been duplicitous attitudes, and obvious secrecy maintained by individuals such as Donald Menzel, and probably many others over the years. Yet very little of this sort of reality is given serious consideration in relation to the broader UFO subject, on account of the apparent fraudulent nature of one series of documents (among a handful of others) that might suggest otherwise.

Although we may not be able to make a case for the legitimacy of the entire Majestic 12 affair (nor should we, in lieu of the evidence against the primary documents associated with it), perhaps it's time we consider whether at least some elements are worth a second look. While much of it probably remains fiction, whatever truth is yet to surface could indeed be even stranger.

Monkey of the Dead 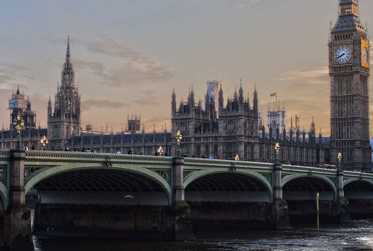 UFOs: When the U.K. Government Admitted The Mystery Was Real