The world has a long history of forests with apparently supernatural qualities, from the legendary Black Forest of southwestern Germany, where every manner of creature, from werewolves to sorcerers, are said to originate.  To England’s haunted Wychwood Forest, possibly the most haunted forest in Britain.  To Japan’s Aokigahara Forest, also known as the Sea of Trees, where more than 500 suicides have been reported since the 1950’s.

There’s something vaguely romantic about a mysterious wood, like Sherwood Forest of Robin Hood fame, which was known as a haven for everything evil.  The idea that a forest holds wicked truths and supernatural power seems to speak to us in a primal way.  Ancient stories perpetuate the myths of such haunted places, and the anonymity of a ghost story involving such a vast area seems to give license to more than a few urban legends. 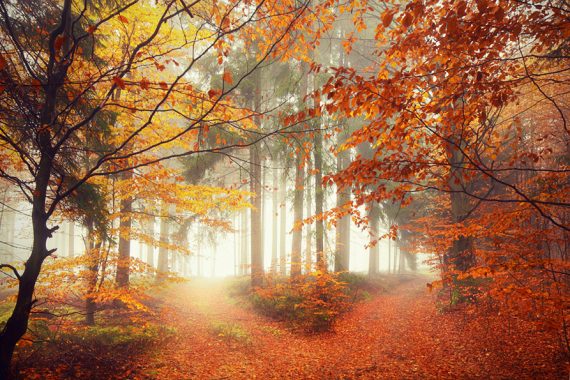 One such instance of high-strangeness is Clapham Wood, where the aptly named Clapham Wood Mystery has been confounding paranormal researchers for decades.  Located in West Sussex, England, Clapham Wood stands to the north of the small village of Clapham.  Historically, Clapham has been an archetypal English village, one that’s been around, likely, since Saxon times.  Over the last 300 years, it has remained largely hidden from the outside world, except, that is, for the last four decades.

Perhaps the most mundane feature of Clapham Wood is it’s abundance of UFO sightings.  Since the 1960’s there have been hundreds of strange sightings both in the woods and in the village itself.  Of course, to say that UFO sightings are mundane may give you the wrong impression.  The area has been the focus of a great deal of UFOlogical study, and has hosted a number of sky-watching vigils over the years.  In addition, people have reported unexplained nausea and the distinct feeling that they were being followed.  Reports of a strange grey mist appearing suddenly on pathways throughout the wood, and instances of ghostly forces pushing hikers and dog-walkers have been known for years.  And studies using a Geiger counter showed a slightly higher level of radiation in the area, although the measurements are fleeting and difficult to localise.

The reason for the moniker Clapham Wood Mystery though, is its ties to Satanic Cults.  In 1975, residents of Clapham were plagued by strange illnesses and the disappearances of beloved pets.

Three cases in particular – which were covered widely by the press – told of two dogs that went missing without a trace and a third that suffered a mysterious paralysation.  The son of Peter Love, while walking their family chow in the wood, watched as his dog ran amongst thicket of trees in the forest and disappeared, never to be seen again.  The following week, farmer John Cornford’s collie disappeared in the same place.  A third dog, a golden retriever owned by Mr E.F. Rawlins was found partially paralysed after running into the woods, the cause of which was never determined and which eventually led to its being euthanized.  This was only the tip of the iceberg however.

In April 1972, the body of an unidentified young woman was found in Clapham Woods.  The case was investigated by Police Constable Peter Goldsmith, among others at his detachment.  In June of the same year, Goldsmith himself disappeared.  Goldsmith, a former Royal Marine Commando had last been seen walking across the Rolling Downs (grassy chalk hills) near the town’s 13th century church.  Despite intense investigation and a wide search of the entire area, his body wasn’t found until six months later, on 13 December, amid a thick patch of bramble less than a half mile from the location where the girls body had been found.  No suspect was ever identified, nor was a cause of death.

And it doesn’t end there…

In July 1975, pensioner Leon Foster disappeared and was subsequently found three weeks later, by a couple who were searching for a horse in the wood, a horse that had also gone missing under mysterious circumstances.  Next, on Halloween of 1978, the vicar of Clapham, the retired Reverend Harry Snelling went missing.  His body was found three years later, by a Canadian tourist.  Again, no cause of death could be identified.

And in 1981 a homeless schizophrenic named Jillian Mathews disappeared.  When her body was found in the forest police determined that she had been raped and strangled.[1]

While no culprit was ever brought to account for these heinous crimes, this doesn’t mean that there aren’t a few theories about who was responsible.  Paranormal investigator Charles Walker, who was looking into the strange goings-on in and around Clapham, received a telephone call from an unknown man.  Described as “well-spoken”, the man claimed to have inside knowledge of the cause of the strange happenings of Clapham Wood.  A very spooky late-night rendezvous was arranged inside Clapham Woods, at the “Cross-Roads”.  When Walker arrived at the agreed location, he could find no one there, until a voice called out from a nearby bramble claiming that it would be dangerous for both of them if Walker had seen the identity of the mysterious tipster.

The concealed informant explained that he was an initiate of a Satanist cult called The Friends of Hecate.  He claimed that the woods were used for their monthly meetings, and that the missing animals had been used as sacrifices to Hecate.  He made no mention of the deaths of the Constable, or the Reverend, or any of the others, but Walker drew a connection between all of the events just the same.  The mysterious man then issued a dire warning, saying:

“There are people in high places involved, holding positions of power and authority, who will tolerate no interference.  We will stop at nothing to ensure the safety of our cult.”[2]

This warning came close on the heels of Reverend Snelling’s disappearance, which occurred barely a week before.

The Friends of Hecate are reportedly an occult sect that worships Hecate, an ancient pagan goddess said to be associated with cross-roads, fire, light, the Moon, magic, witchcraft, knowledge of herbs and poisonous plants, necromancy, and sorcery.[3]

Typically, worship of Hecate finds it roots in a re-evaluation of ancient Greek mythology, and is not readily attributed to Satanism.  Nonetheless, The Friends of Hecate laid claim to the mysterious woods of Clapham for a period of at least 20 years, allegedly holding monthly ritualistic gatherings, at which a blood sacrifice was always required.  It is believed that the group used the Clapham Woods until they were forced to find an alternate location after the Great Storm of 1987 damaged large tracts of the forest.

Apparently as a result of all the suffering and death that have occurred in and around Clapham Woods, many paranormal investigators today believe the forest to be among the most haunted places in England.  When one considers the morbid history of the area accompanied by the reported UFO activity, one is hard pressed to retain skepticism of this assertion.

It seems clear though; something strange calls the woods of Clapham home.

[1] Mathew’s death is considered by some to be independent of the Clapham Wood Mystery.