The Curse of the Ice Mummy

There can be no doubt, mummies are creepy. Twisted forms from another time perfectly preserved until the end of time, they have long inspired tales of myth and legend since time unremembered. One of the spookier phenomena linked to these inscrutable remains that are eternally frozen in time like an insect in amber is the notion that they sometimes carry with them malevolent curses that smite down all who come into contact with them. Long the topic of cheesy horror films and King Tut’s tomb, these mysterious ancient curses are by no means confined to the land of the pyramids, and indeed one of the more recent such alleged curses can be linked to an enigmatic individual frozen in ice for millennia in the mountains of Europe, who has stirred up not only academic mysteries, but also mysteries of the unknown.

In September of 1991, a curious discovery was made among the cold, windswept peaks of Italy’s Ötztal Alps, along the border of Italy and Austria. Two German hikers by the names of Helmut and Erika Simon were walking through the picturesque wilderness of a mountain pass enjoying the majestic vistas when they stumbled across a startling and gruesome sight. There, buried within ice up to its torso was a human corpse frozen solid, a jarring sight out there amongst the otherwise breathtaking splendor of the mountain scenery. The startled couple at first thought it was the body of a lost mountain climber, and promptly notified authorities. After several failed attempts to extract the mysterious body from the ice due to bad weather, it was finally removed on September 22 and was found to be wearing several layers of clothing made of a variety of materials including woven grass, animal skins, and leather, as well as deer hide shoes with bearskin soles, which were quite sturdy and clearly designed to be waterproof. The mysterious corpse was also in possession of a flint knife, a well-crafted copper axe, a simple fire starting kit, a maple leaf enveloping several embers, mushrooms with a string through them, dried fungus, berries, a scraper, a drill, a bone awl, an unidentified tool made of antlers, and an unfinished long bow along with 14 half-finished flint tipped arrows.

The body itself, which had been completely mummified in the ice, was determined to be that of a man in his mid-forties, a slight individual around 1.65 metres (5 ft 5 in) tall and weighing approximately 50 kilograms (110 lb.) in life, who had lived between 3359 and 3105 BCE, making him over 5,000 years old and the oldest known preserved specimen of a human in Europe. The body was also covered in a total of 61 tattoos arranged in 19 groups of ornate black lines along his back and legs. It was even determined that the mummy had the remains of two meals within its stomach and intestinal tract, one consisting of chamois meat and the other of deer meat and herb bread, as well as a bit of ibex meat, with the last meal being consumed as soon as 2 hours before the man’s inexplicable death. It was also found that the individual had suffered from an intestinal parasite called whipworm.

The discovery of what would come to be known variously as Ötzi, the Iceman, and the Similaun Man, would go on to become a baffling conundrum for those who studied it, who used increasingly sophisticated techniques and technology to try to come to some understanding of this enigmatic individual’s identity, life, and indeed how he had died out there in the middle of nowhere. Over the years it was speculated that he had been a high altitude sheep herder, a hunter, a copper smelter, a shaman, a soldier, or even a chieftain based on his copper axe, which would have been an item of great prestige in his time. His death was blamed on everything from a hunting accident, to being the victim of a battle or ritual sacrifice, to exposure to the harsh elements. Indeed the cause of death was long popularly thought to have been exposure, but subsequent findings such as bruises and cuts to the hands, evidence of blunt trauma to the head, and signs of arrowheads that had been removed before death and even one still lodged within his shoulder, as well as signs of a pierced artery, made things more complicated. These signs of violence suggested that rather than simply succumbing to the elements as had been long thought, the Iceman may have been brutally murdered or killed in some sort of battle, although it is also unclear if he had died at that spot up in the mountains or had been brought there later. However, even to this day no one is quite sure who the Iceman was, what his lineage is, what had brought him all the way up into the mountains, or how he died. Even in the face of continued research he remains an enigma, and one of the most baffling archeological mysteries of recent times. 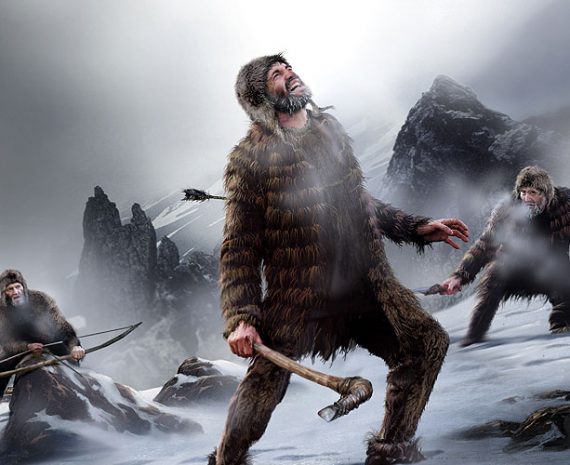 Adding to the mystery of the Iceman are the strange stories that the mummy is surrounded by some sort of sinister curse, which has allegedly been the cause of the deaths of seven people associated with it since its discovery. The first death linked to the “curse” was that of a forensic pathologist from the University of Innsbruck by the name of Rainer Henn, 64, who was one of the earliest scientists working on deciphering the Iceman riddle and indeed one of the first to handle the mummy when he pried it from the ice to place it in a body bag, and who died in a catastrophic car crash on his way to give a lecture on some of his findings concerning the mummy. This death was followed by that of the mountain guide who had led Henn to the body in the first place, and was also one of the first to help uncover the body, a Kurt Fritz, 52, who was killed in a freak avalanche. Oddly, although he had been with a group of other climbers at the time of the incident, Fritz was the only one to be hit by the deadly wave of snow and ice. The string of mysterious deaths would continue when an American film maker who had filmed the removal of the Iceman from the ice for a documentary died of a sudden brain tumor.

This is all spooky enough, and there were already rumors at this time of a curse surrounding the Ötzi ice mummy, that uncovering it and disturbing it had awoken some mysterious evil force bent on revenge, but it would not be the end of the trail of death. Next was one of the actual hikers who had first found the Iceman’s body frozen up in the mountains, Helmut Simon, 69, who went missing while on a hike on Austria's Gaiskarkogel peak in October of 2004. After an intense search for the missing man, his body was found crumpled in a small stream, having fallen some 300 feet from a treacherous ledge above during a sudden whipping blizzard that had swept through the area. Indeed, the leader of the mountain search party sent to look for Simon, a Dieter Warnecke, 45, would also die of a heart attack a mere hours after the missing hiker’s funeral. This was followed by the death of a Konrad Spindler, 55, who had also been one of the first scientists to examine the Iceman, and who died of complications connected to multiple sclerosis.

The final and perhaps the strangest of the deaths linked to the Iceman curse was that of American born molecular archeologist Tom Loy, 63, who was instrumental in uncovering some important information on the Iceman. Loy had discovered four different types of blood on both the Iceman’s clothing and weapons, which was instrumental in pushing forward the theory that he had met his demise in a violent confrontation. Loy was diagnosed with a rare hereditary blood condition shortly after his involvement with the Iceman, which he would battle for years before finally succumbing. Interestingly, throughout his ordeal Loy was well aware of the curse which was said to be linked to the mummy, yet he had always told his colleagues that he did not believe in such things and that it was all pure, wild superstition, often simply stating “People die.”

So was it all mere superstition? Is this all just coincidence and spooky legends? What are we to make of all of this? The curse of the Ötzi Iceman is certainly not the first to be linked with spooky mummies and ancient remains, and has often been compared to the infamous “Curse of the Pharaohs,” in which deaths have been linked to digging up Egyptian mummies, but is there anything to any of this? There are probably hundreds of people who have been involved with handling or studying the Iceman over the years, so is seven deaths during that time statistically significant? Though this may all be just a figment of the imagination of people searching for patterns where none exist, the fact remains that for the time being there are those who truly believe that the Ötzi Iceman is orbited by some sinister, malevolent force with inscrutable ends. At present, the remains are kept in a refrigerated, technologically sophisticated chamber deep within the bowels of the South Tyrol Museum of Archaeology in Bolzano, Italy, and the curse seems to be silent for now.

It seems that there have been eery stories swirling around mummies for as long as mummies have been around. Are these just reflections of our fear of the unknown and the inherit bizarreness and creepiness of mummies in general? Why do such strange legends congregate around these desiccated remains and why do they persist? Is there anything to such tales? For now, the remains of the Ötzi Iceman rest within a dark, cold chamber, perhaps a sinister force at work behind its shriveled visage, planning its next victim, or perhaps just an ancient body stuck in a perpetual frozen state, its eyes once having seen things we can only imagine and never truly grasp.

Spheres From Space and a “Silent Aircraft”