The Golem; Friend, Foe, or Farce?

It may shock you to learn that the origin of robotics is far older and more storied than movies and science fiction novels have prepared you for.  Surprised as you might be to find that Will Smith’s robot archenemies actually owe their existence to 4000 year old Babylonians, the story of developing robotic technology is quite interesting.

Of course, the precursors in 2000 BCE weren’t called robots; that term didn’t come about until 1923.  Before that, most examples of complex machinery were called automata, or automatons.  Though, that word is a little misleading.  Yes, most examples of early robots – like Leonardo da Vinci’s magnificent mechanical lion, and Muslim engineer al-Jazari’s automatic hand washing machines – were called automata, but the word had other uses.

Technically, the word automata – which is derived from the Greek automatos, meaning self-acting – refers to anything that operates, acts, thinks, or moves on its own.  This is why it applies to early robotic mechanisms.  It can be applied to other entities though, as long as they are autonomous. (See what I did there?)

OK, enough shenanigans.  Automata come in many forms, and one of those forms is the golem.  No, not Gollum.  As precious as he is, he’s not what I’m talking about.  A golem is an artificial man, according to ancient Kabbalistic teachings.  But it’s more than that.  It’s the earliest known reference to an android; though, certainly not an android like Star Trek’s Lieutenant-Commander Data.  Actually, it’s kind of complicated.

The first ever golem was Adam.  Yes, that Adam.  You’ll recall from your bible studies that Adam was created out of dust by the Almighty.  This is, in fact, the most basic and early definition of the word; to be “kneaded into a shapeless husk”.  The Talmud says, in Tractate Sanhedrin 38b, that only God has the power to create life, and all golems were created by God.  Thus, humans are technically golem, however, there’s a caveat.  It also says that a holy man who is devout and whom strives to emulate God would also have the ability, but the life he creates would be but a shadow of that created by God.  So where Adam became human, golem created by men are not (all of the golems referred to below are of the second, lesser form).

Here’s where things get interesting.

Golems were, or would have been slaves to their creators, though they were also potentially hostile if given the chance.  Large creatures made of stone, powerful, untiring, and more or less obedient; the one sort of defining feature of a golem is the inability to speak (which is why the word evolved into the modern Yiddish goylem, meaning dimwitted or slow).  You can perhaps see why one would wish to create such a monstrous thing.  And given that the power to create one was thought to be holy, some of the golem characters in history and literature are…well they’re odd.

According to Hebrew teachings, a holy man can create an automaton out of clay.  That is a fully-animate, real, and somewhat spooky golem.  The resulting creature – a sandman, if you will – would be by definition, a lower form of life; incomplete or uncultivated.

To make a golem was deceptively simple.  Some of the stories about their creation are, shall we say, difficult to believe (as though this whole endeavour weren’t something out of a fairy tale).  It’s said that specific Hebrew incantations were used, literally, to animate the creature.  Something known as an ecstatic experience would be induced using shems (one of the names of God), by applying different Hebrew letters to the clay form.  This was done either by writing some variation of the shem on a piece of paper (or parchment) and inserting it into the golem’s chest or mouth, or by inscribing the letters onto the surface of the form, often on the forehead.

Some telling’s claim that the Hebrew word emet was used (אמת), meaning “truth”, and that simply removing the א would change the meaning of emet from “truth” to “death”, thereby deactivating the golem.  Though, the most famous stories about the creation of a golem differ from each other somewhat.

There are a few relatively famous examples of golems, or more accurately, famous stories of their supposed creation and use.  The truth of their existence is doubted, but not by all. 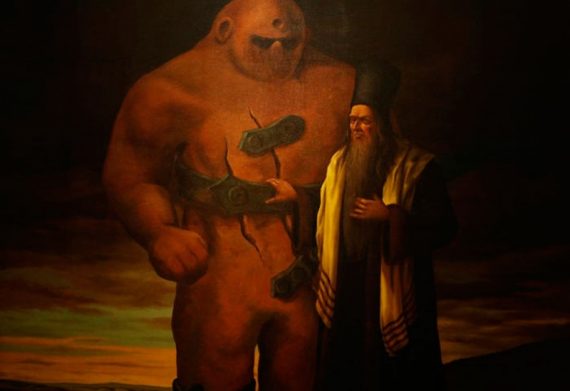 The Golem of Chelm - which was supposedly created by the 16th century Rabbi Ellyahu of Chelm (a city in eastern Poland) - came to life either by the hanging of a pendant bearing the word emet around its neck, or with the inscription of the same on its forehead.  It’s said that Ellyahu created the monster to aid him in heavy work, but (and this depends on the account) the golem began to grow with the passage of time.  As it got bigger, he feared it would become so large that it might threaten to destroy the universe.  So the rabbi removed the shem, causing the great creature to collapse into dust, but in so doing suffered terrible injury himself during the struggle.

Perhaps the most famous golem story is that of the Golem of Prague.  Also in the 16th century, Rabbi Maharal of Prague created his in a desperate effort to protect the Jews of his city from persecution and death at the hands of the Holy Roman Emperor, Rudolf II.  Maharal created the creature on the banks of the river Vltava, molding it in the clay of the riverbed.  He and his son-in-law performed a ritual, involving the recitation of several Kabbalistic verses while circling the inanimate golem in alternating directions, followed by the inscription of a shem on its forehead.

The great creature awoke and performed its function dutifully, but in keeping with the teachings of the Talmud, Maharal was required to deactivate it every Friday evening, so that it would be inoperable on the Sabbath.  For whatever reason, he was unable or simply forgot to do this one Friday eve and - again depending on the account - the creature wreaked havoc across Prague.  Maharal brought down his golem in front of the synagogue after a long battle by removing the shem, thereby causing the monster to crumble to pieces.

The remains of the golem were said to have been stored in the attic of the synagogue, now known as the Old New Synagogue in Prague, so that Maharal could reanimate it if ever it was again needed.  Many people believe that this story is based in fact, and that the golem’s corpse, if you will, was kept in the attic until recent years.  Unfortunately, at least for anyone hoping it was, no evidence has ever been found to indicate this was the case.

You might say that these stories are nothing more than fantasy, legend, religious folklore, and you’d probably be right.  Let’s face it, it’s a fantastical thing, and golems have appeared in literature ever since.  One of the Brothers Grimm tales involves a golem, and there are many books, plays, and stories that include them by name.  Some, however, you might not immediately recognise as golem.  Mary Shelly’s Frankenstein is a golem tale, though adapted to an age of science and electricity.  The Gingerbread Man fairy tale is also a variation on the theme, derived from the Yiddish and Slavic folktales of The Clay Boy.  Some even believe that Czech playwright, Karel Čapek, who wrote Rossum’s Universal Robots – which is given as the origin of the word robot – actually based his famous play on golem lore (though he denied it).

Modern culture has been influenced by the golem more than most might think.  From cartoons and movies explicitly about them, to variations of them appearing in comic books, video games (Minecraft, Assassin’s Creed, and even World of Warcraft), and virtually any form of entertainment media since the dawn of their inception.  You may know these monsters by many different names, but in reality they are the golem, and depending on your faith in Judaism…perhaps they are even us.