It’s time for another edition of Weird Happenings Around the World (that have nothing to do with a presidential election). Today we look at a two-headed calf born in China and a rain of fish in Ethiopia.

A calf with two heads, if I hadn’t seen it myself, I would never have believed it.

That’s 81-year-old Wen Fangqing, who’s been around long enough to see a lot of strange things but apparently nothing like the two-headed calf his neighbor, cattle farmer Gan Yuanhua, showed him. Both live in Linshui county in the Sichuan province of southwest China. The calf-and-a-half was born on February 14th to a healthy cow that had delivered three healthy calves before.

Gan said the calf seemed to be unaffected by its two heads, other than the fact that it died shortly after birth. Local vet Xu Kaiwen attributed it to a genetic mutation while everyone who has seen these stories before shouts “Polycephaly!”

Meanwhile, residents of Dire Dawa in eastern Ethiopia received a double gift when their drought and their food shortage were both briefly relieved by a rain of fish. According to the front page story in the Ethiopian Herald, the mysterious incident occurred at 11:30 am on January 31st in the Dire Dawa kebeles (neighborhoods) of Dechatu, Finfinne, Adada and Eyawale Woreda. 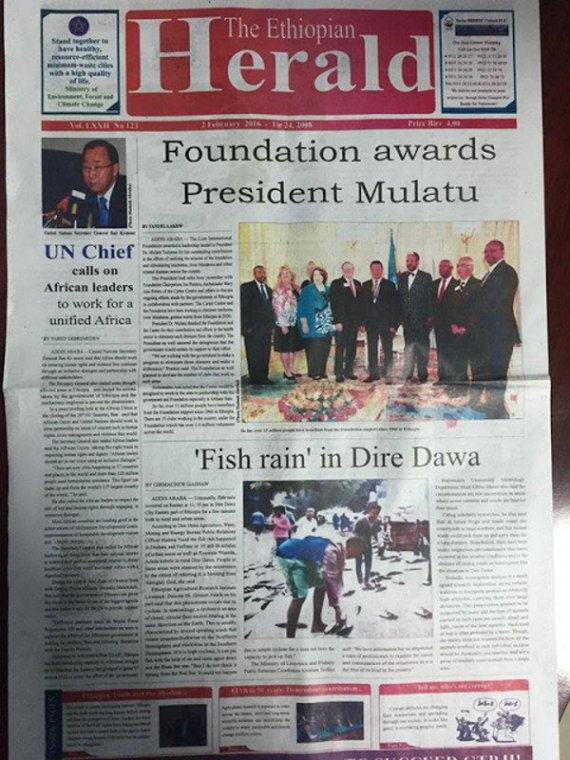 The reports did not specify nor speculate how many fish fell in the few minutes of rain. Nonetheless, it was big news in Ethiopia. The Ministry of Livestock and Fishery Public Relations Coordinator sent a “team of professionals” to the area “to examine the causes and consequences of the occurrence as it is the first of its kind in the country.”

Efrem Mamo, head of the Meteorology Department at Haromaya University pointed out that while instances of rains of fish are normally blamed on storms, strong winds or typhoons, there was fair weather and no strong winds in Dire Dawa before the fish fell.

Where did the fish come from? Again, the reports didn’t specify the types of fish found but the Dechatu River runs through Dire Dawa and the Red Sea and Gulf of Aden are both nearby and loaded with fish. The river could have flooded but that seems highly unlikely because of the drought conditions.

Two-headed calves are sad but generally easy to explain. The fish rain in Dire Dawa was welcome but mysterious. Would you eat fish that fell from the sky?

It Looks Like Someone Left a Gun on Mars