On Thursday night of last week, I watched a movie I had heard a few interesting things about, but which until then I had not seen. Its title: Area 51. No prizes for guessing the subject-matter. It's very much a "found-footage" film of the type that has on occasion been handled very well, but on so many other occasions in downright crummy fashion. I'm pleased to say, however, that Area 51 falls into the former category. The movie has a curious history. Although it was not released until 2015, its origins date back more than half a decade.

The initial work to bring Area 51 to life began in 2009, and various modifications were made in 2011. And, re-shoots of certain scenes were undertaken two years down the line in 2013. Everything came to fruition, however, in 2015. That's when Area 51 was made available on-demand and was shown in the theaters of the Austin, Texas-based cinema organization, The Alamo Drafthouse Cinema. I picked up my DVD copy at a Half Price Books store in Dallas. And - although there are a number of negative reviews online - I'm glad I picked it up.

Area 51 stars Darrin Bragg, Ben Rovner, Reid Warner, and Jelena Nik as - wait for it - Darrin, Ben, Reid, and Jelena. That's right: cast names and character names are the same - something done, no doubt, to emphasize the found-footage theme of the story. And like so many found-footage-driven productions, it all begins in bright and breezy fashion (for the most part), with the three twenty-something guys preparing for a road-trip to Nevada's most top secret but world-famous installation: Area 51 of the movie's title. Although, admittedly, from the outset we learn of something slightly disturbing: in the build up to the road-trip, Reid's personality changes dramatically. His mood and manner alters, he's fired from his place of work, and he can think of practically nothing but UFOs. He's a man on a mission, but also someone caught in the grip of something sinister. 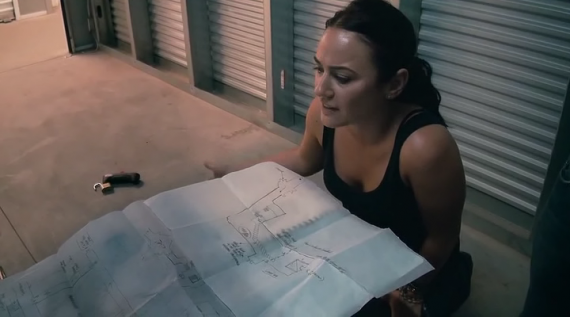 It's when the trio meets Jelena that the story heats up: we learn that her now-dead father worked at Area 51 and managed to smuggle out of the base a variety of items, such as maps, documents, and much more. Wisely, Jelena has chosen to keep the materials hidden well away from the family home. She informs the guys that her father guardedly told her it's not so much what's going on at Area 51 that's important. Rather, it's a portion of the facility which is below the surface that really counts.

The story continues that Jelena's father spent much of his time obsessing about an elderly man who also worked at Area 51. The guys thank Jelena and, as a result of a bit of nifty and quite plausible detective work, soon find the home of the old man. They even manage to break into it while he's not at home and steal his ID card and get one of his fingerprints - both of which they hope will help them get into the base.

With the two, potentially important things in hand, Darrin, Ben, and Reid are ready to head out to Area 51. It's at this point that the "found-footage" angle is reinforced when the three friends meet several real figures from the world of Ufology, specifically George Knapp (of Coast to Coast AM), UFO investigator Norio Hayakawa, and Area 51 researcher Glenn Campbell. Its when the guys reach Rachel, Nevada - and the Little A'Le'Inn - that they hook up again with Jelena.

In no time at all, and late at night, Jelena, Reid and Darren are set to penetrate Area 51's perimeter security, and make their way onto the base and then deep underground. It's all much to the concern and worry of Ben, who hangs back and sees nothing but major trouble looming on the horizon. They should have listened to him. I won't give away the means by which the three actually manage to successfully make it onto the base. It's all very unlikely, but is presented in such an entertaining and alternative fashion that it allows you to suspend belief. Just about. 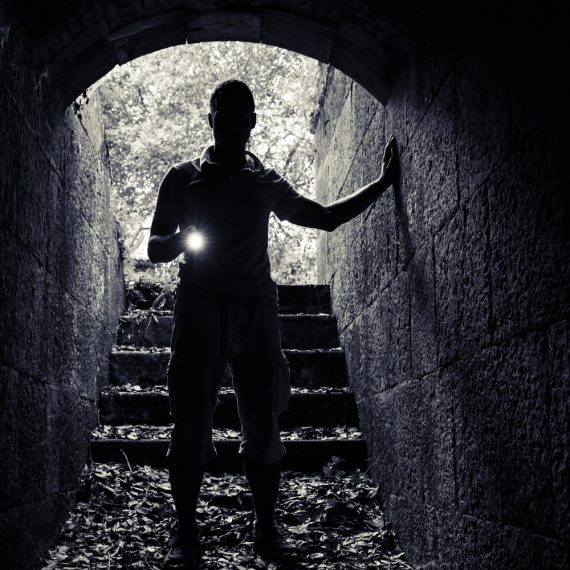 On reaching the base, the trio uses the aforementioned ID card and fingerprint to make their way through the many secure doors that dominate the base. And, in no time, they're heading not just underground; but way underground. The below surface world is very different to anything topside: the group finds evidence of groundbreaking anti-gravity technology and associated research, and they even stumble upon an honest-to-goodness flying saucer. Ours or theirs? Who knows? The deeper they go, however, the more disturbing things become. They eventually come across a series of claustrophobic underground tunnels and caves. We get the sense that, just perhaps, this entire area is out of bounds to the regular workers. Indeed, one almost gets the feeling that it's the domain of aliens and a definitive "no go area" for everyone else.

We see bundles of clothes on the floor and a large number of toys and dolls strewn around the tunnels and caves. We even see what appear - at first glance - to be aliens. In reality, however, they are rubber fabrications. In my mind, this made me think we were being given two possibilities: that maybe there are real aliens at Area 51, or perhaps someone wants us to think that's the case. Possibly, to hide something of a far more down to earth nature - but no less threatening and highly advanced. But, we also get a very brief glimpse of what appears to be a real E.T., so it's a case of "maybe, maybe not," when it comes to what's actually afoot.

I won't reveal what happens next or how Area 51 ends. But, I will say that it concludes in a good, solid "found-footage" fashion. As I have mentioned here at Mysterious Universe on several occasions, I'm not really a fan of sci-fi. But, when it's tinged with more than a bit of conspiracy and handled well (as this movie is), it works for me. And Area 51 did exactly that.

The Deadly Angel Makers of World War I