In a December 2013 article here at Mysterious Universe titled "Arnold's Flying Saucers: Were They Saucers at All? Micah Hanks wrote: "Despite the popularity this subject would garner in those golden years after the War, perhaps there is no early UFO incident that has proven to be quite as influential as that of Kenneth Arnold, a civilian pilot who spotted an entire fleet of strange aircraft while flying over Washington state in June of 1947. The strange craft that Arnold observed would spark a flame that grew like wildfire, eventually forming the modern UFO phenomenon, and at the center of it all was the curious staple that became known as the flying saucer."

Arnold's encounter occurred on June 24, 1947, around twenty to twenty-five miles from Mt. Rainier, in the Cascade Mountains. Precisely what Arnold saw is something that Ufologists have pondered on for decades. They will likely continue to do so for decades, too. The Arnold affair has become such a staple part of the UFO controversy that, for many, it's right up there with the Roswell case. However, I'm not here, today, to discuss the merits of the case. Rather, I'm going to share with you a bit of notable data that might provide corroboration for Arnold and his experience. 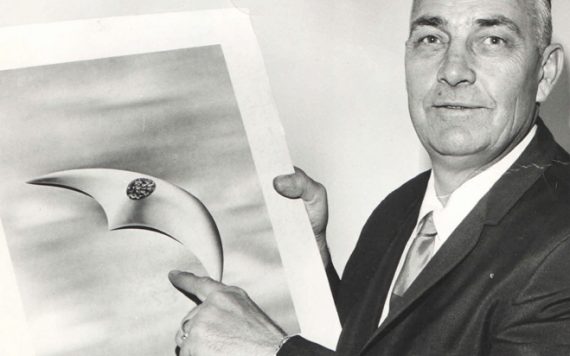 The story revolves around the testimony of a man named Fred Johnson. He was a prospector who may have seen the very same objects encountered by Arnold. Both military intelligence and the FBI took an interest in what Johnson had to say. It should be noted that the FBI has chosen to black-out Johnson's name on its paperwork; however, that the military has not means we know who the man was.

"Fred Johnson [address deleted in the declassified FBI files] reported without consulting any records that on June 24, 1947, while prospecting at a point in the Cascade Mountains approximately five thousand feet from sea level, during the afternoon he noticed a reflection, looked up, and saw a disc proceeding in a southeasterly direction. Immediately upon sighting this object he placed his telescope to his eye and observed the disc for approximately forty-five to sixty seconds."

We're then told that Johnson "...remarked that it is possible for him to pick up an object at a distance of ten miles with his telescope. At the time the disc was sighted by Mr. Johnson it was banking in the sun, and he observed five or six similar objects but only concentrated on one. He related that they did not fly in any particular formation and that he would estimate their height to be about one thousand feet from where he was standing. He said the object was about thirty feet in diameter and appeared to have a tail. It made no noise.

"According to Johnson he remained in the vicinity of the Cascades for several days and then returned to Portland and noted an article in the local paper which stated in effect that a man in Boise, Idaho, had sighted a similar object but that authorities had disclaimed any knowledge of such an object. He said he communicated with the Army for the sole purpose of attempting to add credence to the story furnished by the man in Boise."

And, finally, we have this: "Johnson also related that on the occasion of his sighting the objects on June 24, 1947 he had in his possession a combination compass and watch. He noted particularly that immediately before he sighted the disc the compass acted very peculiar, the hand waving from one side to the other, but that this condition corrected itself immediately after the discs had passed out of sight. Informant appeared to be a very reliable individual who advised that he had been a prospector in the states of Montana, Washington and Oregon for the past forty years."

Fred Johnson: a witness to Kenneth Arnold's squadron of flying saucers? Don't bet against it.

Note: you can read the document at the FBI's website (The Vault) at this link, and by scrolling down to page 27.

Jupiter Gets Walloped by a Wayward Comet