Could Some “Ghost Lights” be Linked to Mystery Booms?

This year, like many previous years, has seen much ado about the so-called “mystery boom” phenomenon, with reports of loud bangs and crashes stemming from areas that, for those who keep up with this sort of thing, might be considered “the usual suspects.” Particularly, the Northeastern United States has been home to much of the recent spattering of boom reports, while areas of southern California also remain tried and true favorites.

One might note here, of course, that Mother Lode, in the heart of California’s “Gold Country”, had been the location where seismic scientists managed to determine last year that many of the “booms” are the result of refraction of explosions carried out at a munitions site several miles away, which bounce off the atmosphere and are carried a great distance. Hence, in addition to the geological theories about the cause of “mystery booms”, there are some instances where meteorological, and other causes are the principle underlying factors.

To my great intrigue, the latest of the so-called “mystery boom" reports occurred right in my own home county in Western North Carolina. Due to the location from which most of the reports are coming, which had been the North Asheville and Weaverville areas of Buncombe County, NC, my preliminary guess had been that this "booming" sound was of seismic origin. A number of years ago, a mild tremor in this exact same area had made local headlines, and while few reports of tremors seem to exist this time around, some shallow earthquakes can result in loud booms, even in the absence of noticeable seismic activity like tremors.

Of equal intrigue, just two years ago researchers Robert Theriault and John Derr noted the presence of "earthquake lights" in conjunction with some seismic activity; namely, that reports of illuminations in the Linville Gorge wilderness and the adjacent Brown Mountain area, popularly known as the "Brown Mountain Lights", are prone to appear in conjunction with seismic activity along the Brevard fault zone.

However, some in the scientific community (as well as this writer and devoted amateur) have looked at this possible connection with a degree of skepticism, in that reports of the Linville illuminations (possibly natural plasmas or "earth light" phenomenon similar to ball lightning) sometimes occur weeks, or even months before or after the seismic activities that researchers like Theriault and Derr have attempted to draw correlations between. Although strange illuminative phenomena does occur in conjunction with some earthquakes, it seems difficult to determine whether any conclusive link between the so-called Brown Mountain Lights, and minor earthquakes along the Brevard fault zone, have any distinct relationship.

Then again, on the outside chance that anything correlative in nature does “come to light” (pun intended), perhaps it would be wise to keep an ear to the ground after all. It very well may be that there could be some correlations yet to emerge between various earthlight phenomena — some of which may already be supported by scientific literature — and the seemingly mysterious “booms” that are possibly seismic in origin. 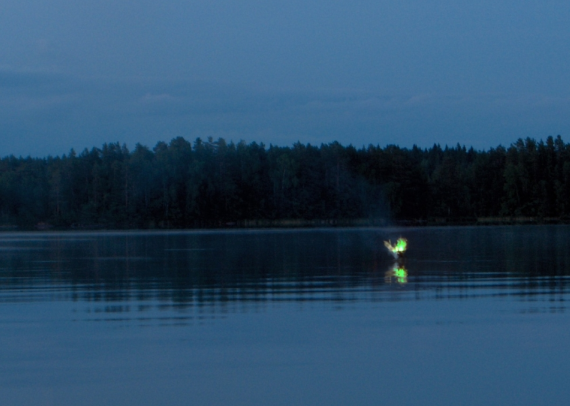