It was 20 years ago that NBC unleashed a much talked about and still widely remembered UFO-themed show: Dark Skies. It was the brainchild of Brent V. Friedman and Bryce Zabel. The show was not destined to last, however. It ran for just 20 episodes, from September 1996 to May 1997. The show focused on the world of two people caught up in a Cold War-era conspiracy of extraterrestrial proportions: John Loengard and his girlfriend, Kim Sayers (played by Eric Close and Megan Ward). When I first heard news of the series, of the nature of the show, and of the man-woman team, I thought: "X-Files rip-off." It turns out that it wasn't. And I was pleasantly surprised, too.

In The X-Files the extraterrestrial angle was always shrouded in ambiguity: were we really being visited by aliens? Was the UFO phenomenon just a cover for highly-classified experiments of a genetic- and mind-control-nature undertaken by top secret, "black budget" programs? Or, was it a strange and secret mixture of both? While ambiguity in a show like The X-Files worked, for me the ambiguity went on way too long - which is why I stopped watching the show around 1998. It's for the very same reason that I stopped watching Lost - I felt like the story was being written with no real idea of where it was heading. A runaway train with no driver in sight. 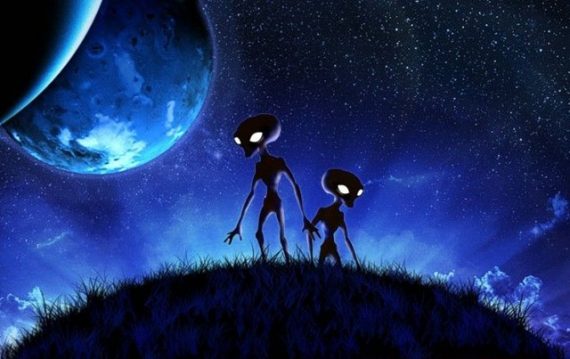 Dark Skies, however, was very different. As the viewer learns from the absolute beginning, there's no doubt that the Earth is being invaded by hostile ETs, something which John and Kim find out very early on. And, whereas The X-Files was inspired by UFO history and classic cases, Dark Skies took things a big step further by taking real people with ties (large, small, and alleged) to Ufology and inserting them into the expanding plot. We're talking about the likes of Betty and Barney Hill, President Harry Truman, Dorothy Kilgallen, Howard Hughes, and the Kennedy brothers (John F. and Robert F.). Area 51, "Dreamland," Roswell, MJ12, and even Britain's most overrated band of all time, The Beatles, are significant parts of the story, too.

The story-line is an interesting one: after he and Kim move to D.C. and become immersed in the world of politics, John stumbles upon a massive UFO conspiracy and is soon incurring the wrath of both MJ12 and the man running it, Frank Bach, played by the late J.T. Walsh. In no time, however, John finds himself accepting one of those offers you can't refuse: he joins the secret group of alien hunters. Things become very dicey, however, when the aliens target Kim and seek to make her one of their own. In reality, the alien menace is actually a small creature, not unlike the face-hugging things in the Alien movies. Via the mouth, the creatures make their way to the brains of those unlucky enough to cross their path and seize control.

Fortunately, the "Ganglions" - as the pesky little critters are known - can be beaten. Providing that infection has not set in to an irreversible degree, it's possible to return the victims to their normal states of mind. Albeit, not without an occasional and slightly sinister equivalent of falling off the wagon. As the relationship between John and Kim and MJ12 gets ever more fraught and tension-filled, the pair go on the run, fearful that it's not just the aliens who want them dead. Shades of The Fugitive spring to mind, as each week a new hazard surfaces and John and Kim seek to learn more about the ET threat, have clandestine meetings with Bobby Kennedy, and do their best to stay alive.

Of course, the fact that Dark Skies got cancelled (nope, it wasn't due to the threats of a real MJ12-type group, but something even worse: low ratings) means we'll never know what the exact outcome of the show would have been. We can, however, make a few educated guesses. It's a fact that all networks, actors, producers and directors would love to have a highly successful show under their collective belt that runs for years and years (NCIS and The Walking Dead spring to mind). But, the fact is that Dark Skies was never meant to last. The idea was to split the entire story across five seasons - and five alone. The plan was for the story to begin in the early 1960s (with flashbacks to the Roswell affair of 1947) and to reach its finale in the early 2000s, when the countdown to the ultimate battle between them and us begins.

Not only does 2016 mark the 20th anniversary of the show, it's also the year in which - last month - I got my hands on the DVD boxed-set of the show. Over the course of about 3 weeks I watched all the 20 episodes and the extras. And, I'm glad I did. Although I'm not a big fan of sci-fi (such as Star Trek, Battlestar Galactica and all that nonsense), I do like a bit of sci-fi when there's more than a tinge of conspiracy attached to it (such as one of my all-time favorite shows, The Invaders). And, not only do I have fond memories of Dark Skies from its original showing, but upon watching the DVD collection I was pleased to see that it still stands the test of time.