Mountains and desert make up much of the state of New Mexico. Bordered by Texas, Arizona, Colorado, (not enough of Oklahoma to really count), and Mexico, the forty-seventh state to join the Union is a mix of rugged Southwest history, and a rich art community. The state capital Santa Fe was founded by Spanish conquistador Don Pedro de Peralta in 1610. Roughly 2.086 million people call New Mexico home, which is about the population of the nation of Slovenia. In size, New Mexico is 121,589 square miles – Slovenia is 7,780. Yeah, New Mexico is pretty spread out. Although sixty-four per cent of New Mexico’s population speaks English, given its Spanish heritage nearly 30 per cent speaks Spanish. Three and a half per cent of the population speaks Navajo. Famous people born in New Mexico include Harrison Ford, Dennis Hopper … and I’ll stop there. That’s more than enough cool for one state. Dangerous animals abound in New Mexico, including black bears, jaguars, mountain lions, coyotes, Mexican grey wolves, rattlesnakes, and apparently enormous turtles.

Bottomless Lakes was the first state park in New Mexico, declared such in 1933, fourteen years before a pesky UFO may (or may not) have crashed at nearby Roswell. The history of Bottomless Lakes stretches back to Spanish conquistadors in the late 1500s searching for the legendary Seven Cities of Gold. Although the Spanish didn’t keep record of the lakes, the local American Indians kept a record of the Spanish, carving a petroglyph at the lakes of one Spanish conquistador riding a horse, according to the article “Legends and Lore of Bottomless Lakes,” by John LeMay that appeared in the Roswell, New Mexico, Centennial Magazine. The lakes (nine in all) got the name “bottomless” by an unlikely source. Legend has it outlaw Billy the Kid and his gang were hiding out at the lakes, and the boys dipped ropes in one lake to see how deep it was. A current kept the ropes from hitting bottom, so the outlaws determined the lakes to be bottomless. The deepest part of any of the nine lakes is 90 feet.

But history isn’t the only thing the Bottomless Lakes have to offer. There are the turtles (no, not the late 1960s “Happy Together” American rock band), an octopus man, a white ghost horse, and a dragon. The nine Bottomless Lakes have gained a deadly reputation, swallowing sheep, and horses, and in modern days cars. People drowning in the muddy depths are said to be either victims of a mystical force that transports them to nearby Carlsbad Caverns, or of the turtles. These reptiles the size of cars are the most popular legend of the murky depth denizens. A boater claimed to see a giant turtle surface in the 1980s, its enormous brown shell made him think Nessie was coming to eat him. 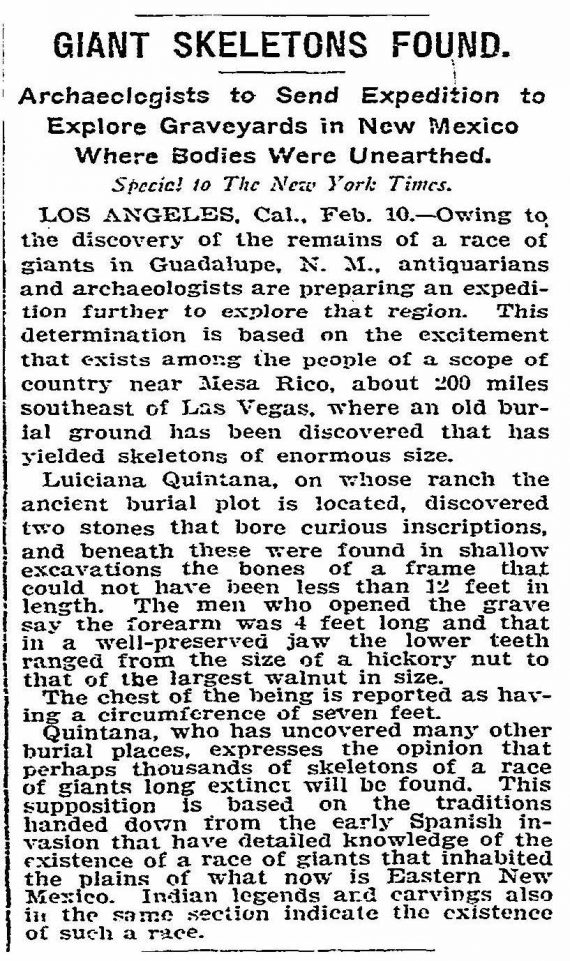 The New York Times printed in 1902 the story of ancient giant human skeletons discovered in Guadalupe, New Mexico. This sent “antiquarians and archaeologists” on an expedition to learn more about these enormous peoples due to “the excitement that exists … where an old burial ground has been discovered that has yielded skeletons of enormous size,” according to the article.

A rancher named Luiciana Quintana apparently discovered an ancient burial site with graves holding skeletons at least twelve feet tall. “The men who opened the grave say the forearm was four feet long and that in a well-preserved jaw the lower teeth ranged from the size of a hickory nut to that of the largest walnut in size,” according to The Times. “The chest of the being is reported as having a circumference of seven feet.”

Unfortunately, much like similar discoveries of the time, the fate of the skeletons, as well as the scientific investigation, are lost in the annals of history. 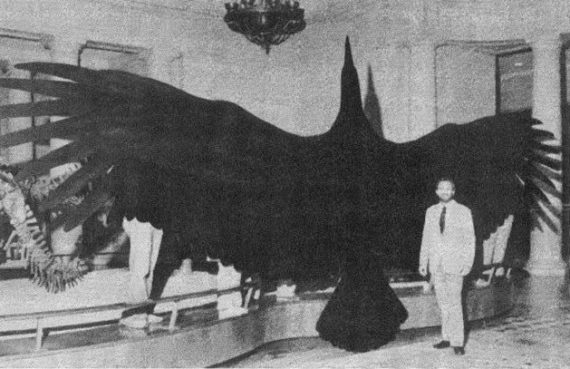 People have reported encountering enormous birds across the United States – birds that, by the descriptions, went extinct around 12,000 years ago. New Mexico is no different. A long-time resident of the Doña Ana Mountains told KRQE News in 2007 he saw something in 1998 he still can’t believe.

One day while hiking Dave Zander saw two giant birds perched on a rocky crag nearly a mile away. "These creatures were so huge they looked like the size of small planes," Zander told KRQE. "All of the sudden one of them … dropped off the top of the mountain, came down the front of the mountain and all the sudden these huge wings just spread out.”

Zander estimated the wingspan at 20 feet. “Not a normal bird. Definitely of a giant variety," he said. "It makes you feel like it could come over and carry you off if it wanted to." The closest animal that would fit Zander’s description is the Teratorn, which became extinct during the Pleistocene Era.

New Mexico isn’t immune to supposedly extinct creatures in its skies. A Colorado man reportedly witnessed a pterosaur in northeast New Mexico in the early 1970s, and in the 1800s residents of Lordsburg, New Mexico, claimed to see giant featherless birds often.

Spring-Heeled Jack was a human-like entity seen across Great Britain in the 1800s. What the hell’s he doing in New Mexico? I’ll get to that.

Although Jack terrorized parts of Scotland, he mostly lurked around the streets of London. Witnesses described him as a tall, thin man who wore a helmet, tight white clothing, and a black cape. He had razor claws, blazing red eyes, and could breath blue fire. Sounds like he could have been in the X-Men. And he was apparently quite pleased with himself. This shrieking, giggling monster would pounce in front of coaches, terrifying the horses and sending the coach and startled coachman flying off into the night. Jack would then pounce away, sometimes effortlessly leaping over nine-foot-tall fences.

Although Jack didn’t kill anyone, he was credited with causing sudden cases of madness among young women.

Next up: New York.