When the wedding minister says “For better or for worse,” can it get any worse than marrying a corpse? When the minister says, “Till death do you part,” does that free the bride up to marry again after she’s dead? These are questions that don’t seem to bother families in China who are paying grave robbers to find female corpses for male relatives who died single. Sounds creepy but the practice is actually on the increase.

Recent reports of grave robbing in the village of Dongbao in Shanxi Province resulted in police finding at least 36 suspected cases. The investigations usually start with families of deceased women finding graves opened and bodies removed. They generally know why. 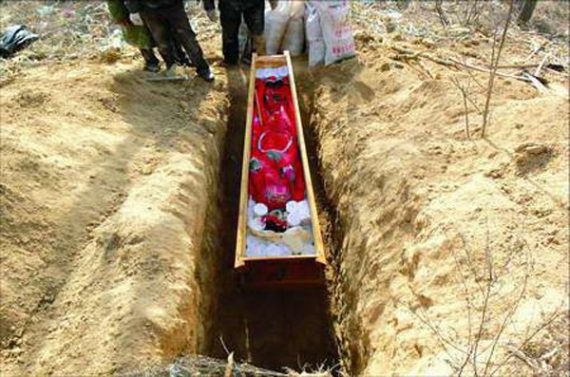 Many in rural China still believe that it’s bad luck for a man to die without a spouse to join him in the afterlife. What’s worse, it brings a curse on the entire family, usually involving visits by the frustrated ghost of the dead male relative.

To retroactively fix this problem, an ancient tradition allows the corpse of the male to marry the corpse of a female in a real ceremony using remains that are dressed in wedding clothes and reburied together after a party.

Ghost weddings were apparently common throughout China’s history until being banned in 1949 by the People’s Republic (which felt it was the republic of dead people too). However, many in rural areas managed to keep the practice alive and got around the restriction by using brides made of paper or dough.

Speaking of dough, that appears to be the big reason for the rise of the real ghost weddings again. The Chinese economy has been good even in rural areas so people can afford to dump the dough dolls and stage actual old-time corpse ceremonies.

This practice is not only macabre but profitable. Police report grave robbers being paid over $15,000 for a fresh female corpse and $750 for old skeletons that have to be wired together for the wedding dress to fit. The arrangements are often made through matchmaking middlemen who also command a fee. Then there’s the families who are victims of the grave robbers. They often pay thousand of dollars to investigators in hopes to find the remains and return them to their graves.

All of this is going on because of an ancient curse. Sounds like the real curse here is having too much money.