Looking For Diamonds in Meteorite Craters

Where would you go to find a diamond? Let’s see, there’s the jewelry store … a mine in South Africa … and a meteorite crater. Wait, what?

Researchers at Lawrence Livermore National Laboratory (LLNL) have just published a paper proving the theory of shock-induced diamonds forming when asteroids and meteors smash into the Earth. The diamonds are called lonsdaleite and were first discovered inside chunks of the Canyon Diablo meteorite which created the Barringer Crater in Arizona. Since then, they’ve been found at other meteorite crash sites like that of the Tunguska explosion in Russia and the Ries crater in Germany.

Lonsdaleite has a different structure than other diamonds – it’s a hexagonal diamond that retains the hexagonal lattice shape of a graphite molecule even after experiencing tremendous pressure to become a diamond. Lonsdaleite does not occur naturally on Earth and is controversial because some scientists believe it’s not a unique diamond structure but instead just a normal cubic diamond with structural defects.

To prove that lonsdaleite is the product of meteorite impacts (and possibly make some nice jewelry for their wives and girlfriends), scientists at the Matter at Extreme Conditions (MEC) experimental area at the Linac Coherent Light Source (LCLS) at the SLAC National Accelerator Laboratory at Stanford (winner of the ‘longest name for a lab’ competition) smashed graphite samples with brief pulses of high-powered lasers causing pressure of up to 2 million atmospheres (2 Mbar). At the same time, they fired another laser composed of ultrafast (femtosecond) X-ray pulses to measure the changes as they occurred. That laser confirmed that the shock of a meteor impact could indeed produce lonsdaleite. 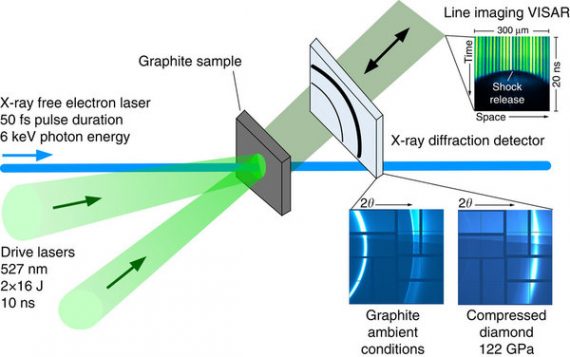 Before you get a shovel and an meteorite crater map or spend hours aiming your laser pointer at a pencil, lead study author Dominik Kraus has some advice:

You won’t get rich from our experiments, but the shock-induced transition from graphite to diamond already has important industry applications. For example, nanometer-sized diamonds for fine polishing of materials are created by detonation of carbon-bearing explosives. These explosions typically generate pressures up to ~0.5 Mbar, just above the threshold of diamond formation. Here we show that above 2 Mbar, the lonsdaleite structure can be generated in a very pure form. Since pure lonsdaleite is supposedly even harder than diamond, this is highly interesting and other groups now try to recover these samples after an experiment.

So you won’t get rich but you could still end up with a chunk of lonsdaleite that’s harder than natural diamonds. They might not be dazzling, but a pair of earrings made from that would still be a great conversation piece.